How To Master The Art Of Mingling 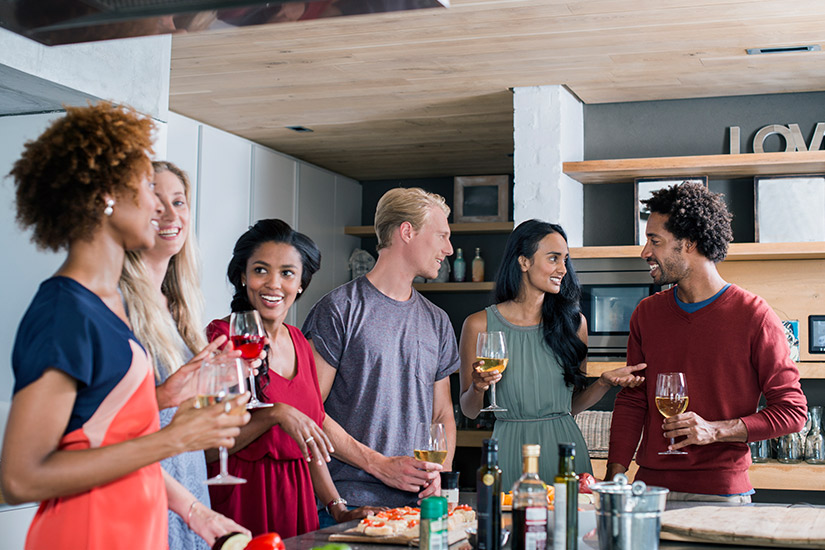 HOW TO HAVE FUN EVEN WHEN YOU ONLY KNOW THE HOST. Resist the urge to embrace your social Scrooge and stay home—mingling can be fun if you target the right future friends. Toronto-based etiquette expert Lisa Orr recommends avoiding people in pairs. (They may be engaged in a private convo.) Instead, find a group of three or four—if someone makes eye contact and smiles at you, cue the charm offensive.

HOW TO MAKE SMALL TALK WITH STRANGERS THAT ISN’T SOUL-CRUSHING. First, find a commonality—ask how he or she knows the host. Then, Orr suggests, drop a compliment. “Something as simple as ‘I love your shoes’ lets the other person know you’re paying attention to them and also makes them feel more comfortable.” From here, ease into personal—but not too personal—topics: Ask about their travel plans or their Oscars picks. (If they say anyone other than Gaga, walk away.) Save the job, marriage and kids questions for never. “They are just too blunt for new acquaintances and make the conversation feel like a job interview or a bad date,” says Orr.

HOW TO END A CONVO THAT ISN’T GOING ANYWHERE. Don’t pretend that you have to take that very important work call…at 9 p.m. on a Saturday. “Sometimes people just aren’t interested in having a chat,” says Orr. “Close the conversation by shaking the person’s hand and saying ‘So nice to meet you.’” And don’t take an awkward convo personally. Some people may just be shy or dealing with something you don’t know about.

HOW TO DISCUSS POLITICS WITH YOUR CONSERVATIVE UNCLE WITHOUT THROWING WINE IN HIS FACE. Old-school etiquette experts will warn you to never talk politics at parties—but they didn’t live in the inferno that is the 21st century. Tread lightly, says Orr. “Keeping the debate friendly is a tough one because the more you try to tell someone to calm down, the more aggressive they tend to get,” she says. “I include humour to see if tension can be diffused, like referencing a late-night comedy host who tackled a political topic particularly well.” If that doesn’t work, acknowledge what they’ve said and change the subject. And if all else fails, distract ’em. “Pretend to drop your purse or keys and say something like ‘I can’t believe I did that—I’ve just been so exhausted lately,’” says Orr. “At this point, people will immediately shift to discussing your sleep habits and offer sympathy and a host of home remedies.” And you will be crowned party peacekeeper. 