Why women are wearing tuxedos again

Half a century after Yves Saint Laurent’s iconic Le Smoking debut, the tuxedo returns to prominence. 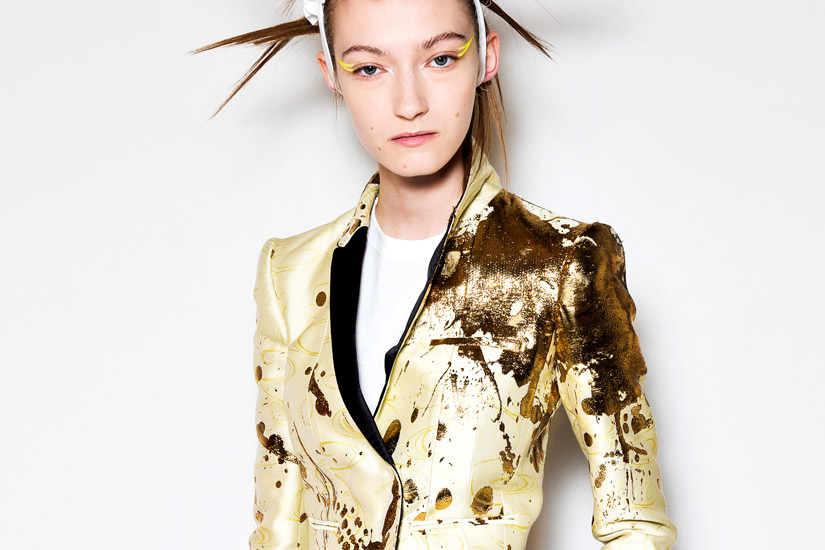 Fashion trends are like relationships: Some are fun for a time (nice knowing ya, peplum), while others are on-again, off-again (welcome back, chokers and oversized belts). And then there are those rare connections that get better and better – like the tuxedo.

All eyes – and iPhones – were locked on Evan Rachel Wood at the Golden Globes this past January, when she chose to wear a custom Altuzarra tux instead of a gown. “I’m not trying to protest dresses, but I wanted to make sure that young girls and women know they aren’t a requirement,” she said, adding later, “I promised myself I would wear a suit to every awards show this year.” At the Screen Actors Guild Awards, she donned another of the NYC-based designer’s creations, this time a slim-fit double-breasted navy velvet jacket with matching cigarette pants.

What we see on the red carpet usually originates on the runway, and a quick scan of this season’s catwalks shows that labels like Gabriela Hearst, Mugler and Prabal Gurung got there first. See: their respective peacocked versions of the classic tux for resort 2017 in sheer black, structured red with bell-bottoms and paisley. Lanvin and Alexandre Vauthier showcased more traditional takes on the tux for their spring/summer 2017 shows, while Anthony Vaccarello gave a sartorial salute to Yves Saint Laurent with his 21st-century version of the designer’s Le Smoking at his debut collection for Saint Laurent. Meanwhile, Alessandro Michele’s tricked-out tuxes at Gucci (both resort and spring/summer 2017) evoked a ’70s-era David Bowie when he was in his dandy phase.

From left: Gucci, Saint Laurent and Lanvin Image by: Imaxtree

The late iconic British musician also inspired London-based designer Racil Chalhoub’s spring collection. She launched her suit-based line, Racil, in 2015 when she was “really craving a good tuxedo, which [she] couldn’t seem to find.” This season’s lookbook is edited into three capsules: one devoted to the stylings of the Rebel Rebel himself, another to Prince’s go-to zoot suits and the third to Mick Jagger’s beloved poet shirts. “In the expressive, rule-breaking era of the 1970s, these rock stars and the women in their lives were known for sporting both tuxedo suits and dresses from their interchangeable wardrobes,” says Chalhoub.

Breaking the rules of how a tuxedo should be worn didn’t start with rock ’n’ roll, though. Fashion historian Amber Butchart, author of The Fashion of Film: How Cinema Has Inspired Fashion, says that in the 19th century, trousers were sported by women as a form of protest. (In an era of corsets and petticoats, clothing constraints were part of daily life.) Proto-feminist groups like the dress reformers, led by Amelia Bloomer, picked up on the ease of movement of suit-inspired women’s clothing. “The dress code that Bloomer advocated was seen as so subversive that she had to renounce it,” says Butchart. The reason? “It was taking attention away from issues like the right to vote and property ownership.”

Hollywood unintentionally took up the cause in 1930, when Marlene Dietrich wore tails in the cabaret scene of Morocco, despite the initial frowns from studio heads. Like many of her contemporaries, Dietrich favoured men’s clothing off-camera too. But “even though formal menswear on women became popular in Hollywood in the 1920s and ’30s, it still would have been shocking to see women dressed like this in public outside of the subversive space of cabarets and theatres,” says Butchart.

Marlene Dietrich in the 1930 film Morocco

Yves Saint Laurent changed all that with the unveiling of Le Smoking in his fall/winter 1966 collection. The two tuxedos – one satin, one wool – were inspired in part by Dietrich’s now famous scene and at first scandalized critics. But with the unfolding feminist movement and the wardrobe changes that accompanied it (as many women began to incorporate pants into their daily lives), Le Smoking was also a symbol of change and strength. “Chanel gave liberty to women; I think Saint Laurent gave them power,” said his partner, Pierre Bergé, in 2012.

In the 50 years since, the tux has been reinvented over and over. “The tuxedo is timeless because it can be easily modified and updated,” says Patricia Mears, deputy director of the Museum at FIT in NYC. “It’s one of the few truly ‘modern’ items of dress.”