Why Hats Are the Must-Have Accessory of Spring

We’re head over heels for spring’s most playful accessory. 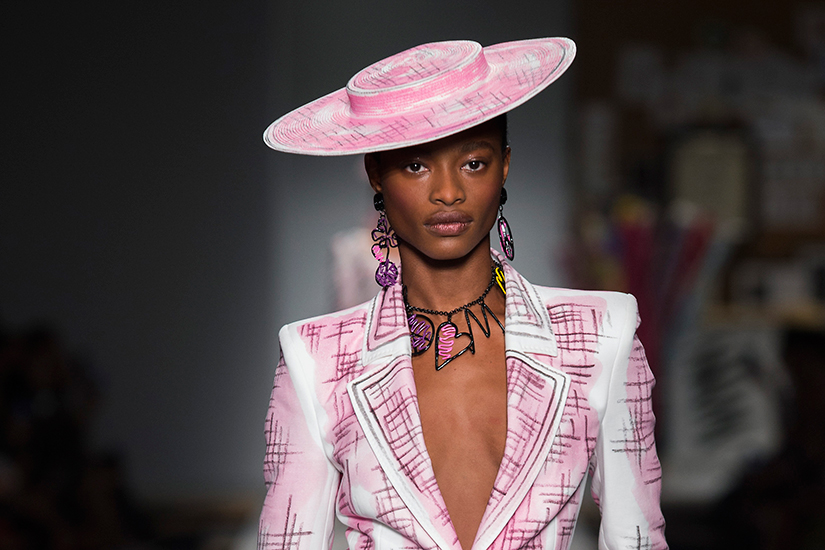 Fashion is at its best when we’re given permission to play. It is, after all, supposed to be fun, right? This would explain our sudden obsession with hats—they are a visual delight, an unexpected statement, a telegraph of someone’s personal style like no other accessory.

On the runways, the resurgence, unsurprisingly, started with a bang: one supersized straw hat at Jacquemus’ spring/summer 2018 show, its circumference nearly as wide as a beach umbrella. The front row gawked; the Insta set double tapped; a nearly nude Bella Hadid, on a photo shoot in Mexico, drew 1.5 million likes posing under the generous shade of a similar style by Olmos y Flores.

Now, one full turn of the fashion calendar later, the spring/summer 2019 catwalks are a dress-up box ripe for the picking: ’80s-inspired broad-brimmed boaters tipped to the side at Moschino; romantic, slightly haunting beekeeper styles from Simone Rocha; knit swim caps outfitted with fanciful frills at Michael Kors; and 3.1 Phillip Lim’s reincarnation of last season’s bucket hat, this time even roomier and done up in luxe white leather.

Look-at-me hats stem from a desire to dress up again, a reaction to the now-curtailing athleisure trend, says Ana Correa, an accessories and footwear trend forecaster at WGSN. “It’s a power statement from women taking more important roles in the workplace and society,” she says of the comeback. “We want to feel impactful in our clothes.”

Hats certainly acted as a visual marker of Meghan Markle’s royal ascension. A no-frills fedora became a go-to in the courting phase, and a petal-pink Philip Treacy fascinator worn three days post-nuptials solidified her new title as the Duchess of Sussex. Now, you could picture her at this year’s Royal Ascot sporting Valentino’s elegant mile-high straw hat, the wafer-thin wisps offering refuge from the world’s prying eyes.

As the duchess proves, the right hat permits reinvention. We witnessed how an encrusted cowboy style worthy of the 10-gallon name took Jennifer Lopez’s Grammys red carpet Ralph & Russo look to an 11 and how a black bolero transformed Lady Gaga’s Ally from struggling singer to tour headliner in A Star Is Born. “Wearing one gives you an opportunity to be more yourself, whether that’s remaining undercover or standing out,” says Dani Griffiths, the Vancouver-born milliner behind New York-based hat label Clyde. “If you find the right hat that gels with you, it can provide a sense of security and ease.”