As ’90s nostalgia grips the fashion world, one writer recalls the dark and dreamy grunge heyday. 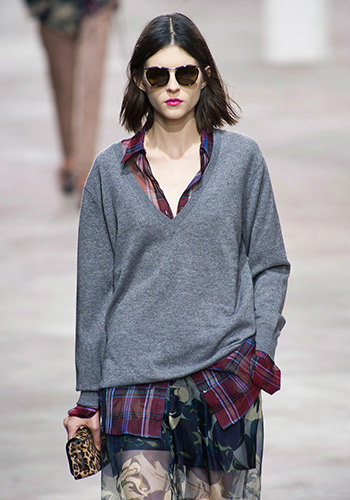 In the 1990s, when I came of age, the grunge era was in full swing. The women looked like dolls that little girls had dressed, while the men looked like they had just been attacked by a storm of moths. I took to the style immediately. Every fashion and cultural movement needs its foot soldiers—otherwise Napoleon would have been just a short man with a funny hat who had nobody to boss around.

As a working-class teen from Montreal, I couldn’t really partake in the glamorous, over-the-top fashion of the 1980s. My dad bought me clothes from a store in Saint-Henri that was going out of business.

GALLERY: How to wear the ’90s minimalism trend to work

I had a corduroy suit and an undershirt with pineapples on it. I dressed like the dictator of a foreign country. My sister cut my hair over the toilet bowl. I was picked on in high school, and I always felt unattractive. I didn’t like the bands that were big at the time: Mötley Crüe, Guns N’ Roses and Bon Jovi. They all seemed to be fronted by men who would never go out with me; they dated models with shiny legs and expensive clothes.

And then along came Nirvana. The band’s lead singer was a radically different kind of celebrity. Kurt Cobain sang about how he had slept under a bridge. Even when he became a millionaire, he continued to dress like a kid who had been bullied in school and lived in a single parent household in the lame part of town. He was the stoner who sat in the back of the class in 10th grade.

I loved that he was celebrating being a down-and-out loser. If I were to accept the dictates of capitalism, I would end up uneducated, unmotivated and unsuccessful. I wanted something more. I wanted to react against it all, like Kurt Cobain.

My rebellion started with my wardrobe. I began to really rock the thrift store look that was part of the grunge fashion movement. I found a black leather jacket in the trash that I cut and got my dad to hem with his sewing machine. I went to Value Village and picked up second hand skinny black suits and a few 1970s dresses with wide collars. At a garage sale, I bought the widest pair of bell bottoms in existence.

STYLE LESSON: Do you have to be cruel to be chic?

At McGill University, where I was a first-year English lit student, we were sourcing influences on literary texts. I began to treat my evolving fashion sense with the same rigour: From the French revolutionaries, I stole tailored coats and lace-up boots; from Edwardian dandies, I appropriated two-piece pinstriped suits and carnation boutonnieres; my skinny black fur coat and tight sweater minidresses were inspired by young women in the 1960s who worked at a sweets factory in Battersea, England, and wanted to have a little fun before settling down.

I ate at Café Phoenix, a little co-op restaurant that was run by artists my age. You could order your rice and beans and then find yourself waiting for an hour and a half before you got your plate, but the place was filled with kids who dressed like me. One day I walked in wearing a white vinyl jacket, a sweater covered with holes, an unhemmed felt skirt with the ends coming undone and a pair of black tights with big holes in the knees that exposed a red pair underneath. Everyone in the café turned around to check me out.

In high school, the boys always told me that I was butt-ugly. Then, when grunge took over, I became beautiful. My look, my style, my back- ground were suddenly in vogue. In most places and epochs, I would have been regarded as a mess. But in that corner of the world, and in that moment in history, I was Café Phoenix’s Zelda Fitzgerald. No matter what I put on, I will never feel as pretty and in my own skin as I did sitting squashed among a group of friends in my rabbit fur coat, polka-dot dress and combat boots.

Clothing, after all, is a reflection of the cultural zeitgeist. The flapper fashion of the 1920s was directly related to women’s new found sexuality and fearlessness—if you wore those dresses, it meant that you were also out dancing, drinking and asserting your existence. In the 1960s, the hippie wardrobe of blue jeans and beads represented a corresponding belief in peace and free love. During the 1970s punk movement, if you ripped up your T-shirt like Johnny Rotten and you weren’t an anarchist, you were accused of being a poseur. What we wear has always acted as a statement about who we are—or who we want to be.

During the grunge movement, we former losers— swollen with our new found identity—became a little full of ourselves. Anything that seemed even remotely mundane was scoffed at as being representative of the Man. We mocked everything: Marriage was bourgeois. Watching television was bourgeois. Having grandparents was bourgeois.

MUST-READ: An oral history of the ’90s supermodels

Every movement has its drug. The flappers had booze; the hippies had pot. In 1993, we had heroin. In the same way that people wonder whether it’s necessary to have a Master of Fine Arts in order to become an artist, we used to wonder whether we needed to be heroin addicts in order to be artists. Heroin was the worst thing that happened to my circle of friends. You would see them asleep under the table or, like cats, on the fire escape. And we stopped inviting them over because they would steal all of our things. Forced to spend the next decade of their lives battling addiction, they were the casualties of the grunge movement.

Each counterculture, after wreaking its righteous havoc, is destroyed by its own excess and propensity to be inflexible. Many people whose lives embody a specific cultural moment don’t survive it. F. Scott and Zelda Fitzgerald flamed out with the Jazz Age, Sid Vicious and Nancy Spungen were buried along with punk, and Kurt Cobain didn’t outlive the movement he helped create; he left his wife, Courtney Love, to be the dowager of grunge.

Shortly after Cobain’s death in 1994, I left grunge behind. I worked hard to finish my B.A. at McGill, signed a lease for my own apartment and began to pursue a writing career. But even now, at a moment’s notice,
that era comes flooding back in a series of dreamy snap shots: We stayed up all night. We never left the bar or café we were sitting in until we were kicked out. The buses were never running when we were finally done partying, so we had these long walks home. The neon lights on Saint-Laurent Boulevard were like highlighted passages in 1940s gangster novels. The stars winked like the studs on Sid and Nancy’s
leather jackets. The car alarms dropped their beats. The police sirens wailed their guitar solos. The homeless shook their Styrofoam cups of change when anyone passed, like the tambourines of gypsies. And the whole world was a rag-and-bone orchestra playing an acoustic version of a Nirvana song.

READ MORE:
An oral history of the ’90s supermodels
How to wear the ’90s minimalism trend to work