An oral history of the '90s supermodels 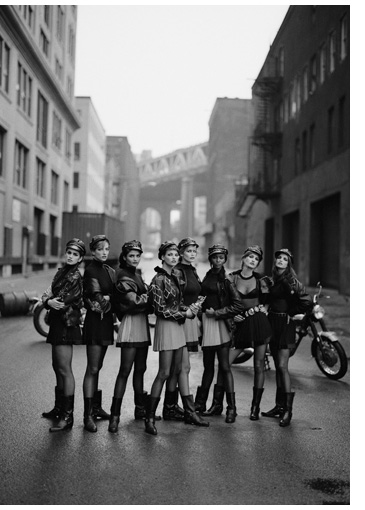 The term “supermodel” has been tossed around since the ’40s, but it wasn’t until the early ’90s that the moniker achieved a shiny new aura: It was the era of model as celebrity. Cindy Crawford and Claudia Schiffer became household names, scoring mega-contracts with mega-brands from Pepsi to Chanel.

Fashion fans obsessively tracked Linda Evangelista’s ever-changing hair colour, while gossip pages recounted Naomi Campbell’s high-profile romances with celebs like Mike Tyson and Robert De Niro. The moment was as brief as it was intense—about 10 models rose to the top over approximately five years—but it changed fashion forever. We got the insider scoop on the highs, lows and style legacy straight from the models and designers who lived it.

ENTER THE TRINITY
In 1989, Evangelista, a pageant queen from St. Catharines, Ont., chopped her hair and became a fashion star. Brit bal­lerina Campbell and all-­American Christy Turlington entered the style stratosphere soon after. Best friends, the trio became known as “the Trinity.”

Pierre Hardy, designer: “At that time, I was in charge of the Hermès show. We cast Naomi, who was a minor; she was with her mother. I remember her arriving at 6 in the morning, and she was a pure beauty. She was a kid, but she was a queen.”

Liisa Winkler, model: “Naomi is the classic supermodel. She was always a presence at the shows. She wasn’t somebody that I would go up to and chat with. She had her own rack, her own people, came at the last minute, had her hair and makeup done quickly by the right people, went to the rack, got dressed, did her show and then left.”

Amber Valletta, model: “There were extraordinary moments at fashion shows—we were all together then. I was really close with Linda, Christy and Naomi. I looked up to them. It’s a sisterhood—once you’re in the sorority, you’re always in it.”

GALLERY: A day in the life of three Victoria’s Secret models

Isaac Mizrahi, designer: “Linda used to come to my fittings. At a certain point, she owed us money because she really loved our shoes. And I asked, ‘Where should I ship these?’ She said, ‘Just send it to the Concorde; they’ll know what to do.’”

Denis Desro, editor-in-chief (fashion), ELLE Canada and ELLE Québec: “Linda was on ELLE Québec’s first cover. Gilles Bensimon shot it in Los Angeles in five minutes between two [other] shoots. It was the first time she showed off her new short haircut. She was so easy to photograph.”

Michael Kors, designer: “We were shooting an ad campaign with Steven Meisel and Christy. The next thing we knew, Linda and Naomi stopped by the studio. I kept saying ‘Are you sure you don’t ALL want to be in the picture?’ Christy was like, ‘No! It’s just me! They’re just here to hang out.’”

Mizrahi: “Christy is my favourite because she is so beautiful: her bones, the height, the body. She was always so punctual, so professional. That doesn’t make for a good story, though.”

THE AGE OF EXCESS
George Michael’s “Freedom! ’90”—featuring Evangelista, Turlington, Campbell, Crawford and Tatjana Patitz—cemented the supermodels’ fame and became one of the most iconic videos ever made. (The following year, Helena Christensen upped the ante, vamping it up in Chris Isaak’s “Wicked Game.”) Models commanded astronomical fees, earning up to $10,000 per runway appearance. They also often posed together, stoking one another’s fame.

Helena Christensen, model: “We shot it in Brooklyn. Those shoots were always hysterical—you can imagine all those girls, which creates a lot of energy, electricity and intense moments. Then the styling, clothes, jewellery, makeup, hair….”

Lindbergh: “[By the time] they were all ready, it was dark. I had wanted to do it in daylight. I tried to do the picture anyway. It was a one-second exposure—really, really long, which is hard to do with a group shot. I found two pictures in the contact sheet that were in focus. But one of them was the shot.”

Valletta: “[The same year for another magazine], Christy, Linda, Naomi, Shalom [Harlow], Nadja [Auermann], Kristen McMenamy and I—and one or two others—had a pillow fight on a bed. That was the cover. That was a really fun shoot. There were tears—someone got hit too hard with the pillow. We were kids.”

Winkler: “There was always so much alcohol and girls drinking backstage…. It was like a party, and if you didn’t [join in], it was weird. I remember holding something in my hand sometimes to look like I was part of it. I didn’t really care to drink it because it was, like, lunchtime. That’s just what you did to fit in.”

The top 6 models who ruled the Fall 2013 catwalks

Desro: “We shot Claudia for the fifth anniversary of ELLE Québec. We did a cover and had a big party. They had to block the street—there were thousands of people who wanted to see her.”

Rolf Snoeren, designer, Viktor & Rolf: “Regardless of how beautiful these women are, [the supermodel era] irritated us. Fashion is about clothes. We made a work commenting on the top-model cult. It was a sound piece where children recited the names of top models as if they were being taught their names in class. A teacher would say ‘Christy! Naomi!’ and the children would repeat them.”

During the mid ’90s, another fashion superstar emerged. Click to the next page to find out who it was…

FASHION LEGACY
By the mid-’90s, fashion’s pendulum had swung yet again. As grunge became the decade’s cultural touchstone, the glamorous excess of the supermodels felt outdated. “Heroin chic”— a controversial new movement—emerged and was led by super-skinny models such as Kate Moss. A 1998 Time story declaring the “death of the supermodel” represented the formal end of an era.

Valletta: “It was a different time. The whole world was bloated: The economy was bloated; paycheques were bloated. You’re 18 and you’re making a lot of money, and people are telling you how great you are; you’re not the most humble people in the world. But most of those women wouldn’t work that way today.”

Winkler: “You can make modelling what you want now. Before, it was ‘You do this, you fit in and this is how the business is,’ but now you can sort of invent it for yourself. There’s much more freedom to be yourself, and it’s safer.”

Christensen: “We were just doing what we were doing. I felt like a bit of an outsider looking in. I must admit that I felt I was looking at it from above, or from the sidelines, thinking ‘It’s so strange and interesting what’s happening,’ but, maybe because of my personality, I never felt totally integrated. I felt like a fly on the wall.”

Kors: “The one thing I always say is that when the supermodels all hit the scene on the runway, you finally saw personality and diversity and variety.”

Hardy: “They were goddesses. They’re not skinny—they’re strong, powerful and confident.”

Valletta: “To me, the biggest rock stars were the supermodels ahead of us—Christy and Linda, they were the rock stars. We marked a new time in fashion.”

Read more:
Two minutes with Canadian top model Grace Mahary
What it’s really like to be a plus-size model
Canadian models on the most beautiful…
The best fashion Instagrams from Spring 2014