Style & error: How to wear the veil fashion trend

No longer reserved for the wedding season, veils have appeared on runways in the likes of Alexander McQueen and Jil Sander. Can this lacy fashion trend transform you into a sartorial standout? We test it out. 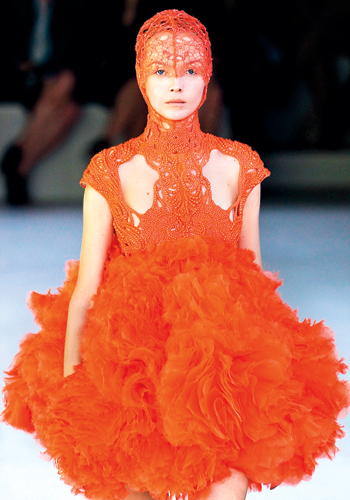 THE LOOK
Trend Veils.
Who’s doing it? Stephen Jones did a veiled beanie for Jil Sander, Comme des Garçons showed bridal veils, Alexander McQueen did an aviator-cap version and the Olsen twins recently wore black lace veils for a cover shoot.
Trendology Whether it is the Islamic hijab, the traditional white bridal veil or the black mourning veil, veils are about creating social distance. They were first mentioned in the 13th century BC but didn’t become a fashion statement until the late ’30s (see Marlene Dietrich in Desire) and the ’50s, when pillbox hats were garnished with a bit of tulle.

TEST DRIVE International Women of Mystery have few options in the way of accessories that sequester. There are the standard-issue sunglasses. There are the low-brimmed fedoras and cloches and the floppy gauchos and sombreros. And, for those seeking a casual secretive aura, there is the New York Yankees baseball cap pulled low over the eyes. But, short of hanging a Do Not Disturb sign on your wrist, there is little that can adequately convey the standoffish mood in which we sometimes find ourselves. That is, until the veil: a simple piece of black netting or gossamer lace that draws a line between you and the world.

Here’s the catch: It’s when you are wearing a veil that the world chooses to get in your face. “Is that a veil you’re wearing?” asked the driver when I climbed into the backseat of a taxi. “Um…yes,” I mumbled. “Are you wearing it for religious reasons?” “Um… no.” “Are they in fashion?” “Um… I don’t know—maybe.” “You don’t see those anymore. My grandmother wore a veil when my grandfather died….” And so on and so on.

One time, I was wearing the Stephen Jones for Jil Sander veiled beanie when I ran into my friend Anne-Florence in the street. “Oh, so that’s what that is,” she said as she walked up to me. “I couldn’t tell what that was around your face. From far away, it looks like you have a swarm of bees around your head.”

Aside from the intrusions and optical illusions occasioned by the veil, both the Stephen Jones for Jil Sander veiled beanie and the Maison Michel veiled headband went surprisingly well with everything. I tried them with a pale-blue lace Valentino cocktail dress and then with rust-coloured wide-legged Chloé trousers and a Commune de Paris 1871 T-shirt without a hitch. They added appropriate Norma Desmond drama to a Lanvin pencil skirt and a flesh-coloured quarterback jersey top and even worked with jeans, which is my ultimate litmus test of things worth wearing. They didn’t work so well with a long yellow Derek Lam sundress, though. There is something abhorrent about wearing a veil to the beach. Probably because it signifies modesty, death or enigma, none of which goes well with tanning oil.