Style & error: How to wear a buttoned-up white shirt

Does a white shirt go with everything? One woman buttons up with this season's cleanest trend - the short sleeve white shirt. Did she succeed? 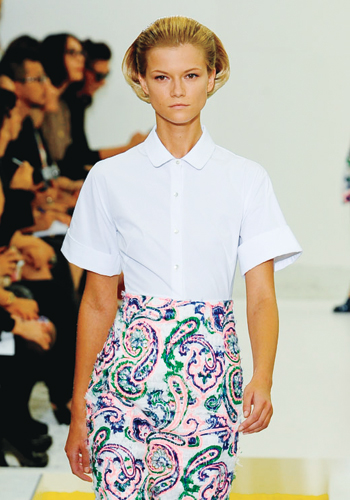 THE LOOK
Trend The white short-sleeve button-up cotton shirt.
Who’s doing it? Jil Sander, Christopher Kane and Céline.
Trendology The ladies’ short-sleeve button-up rode in on the shirttails of the men’s, which appeared in the 1950s. The men’s short-sleeve shirt was the first example of business casual: a compromise struck between office formality and summer temperatures.

TEST DRIVE A white short-sleeve button-up (SSBU) cotton shirt doesn’t sound like fashion to me. It’s a uniform requirement: something you wear tucked into navy-blue polyester trousers with a black nightstick dangling at the side. Or under a bib apron with a stack of dishes cascading down each arm. And yet this sexless, joyless little uniform item is the hit of the season. There are a lot of dos and don’ts about the SSBU—but mostly don’ts. Like, don’t wear an SSBU if you are a 36B and up because this trend is strictly for flatchesters; the SSBU cannot abide button-poppers. And don’t try this trend if you habitually pair everything with black because that is no longer an option. And don’t try to dress it up with a clunky necklace because SSBUs abhor accessories.

The SSBU is the fashion equivalent of a palate cleanser: It’s cold and astringent. Of course, not just any old SSBU will do. This season’s is a particularly uptight version, combining wide-cut sleeves with a tiny collar. And here’s another don’t: Don’t commit the egregious error of unbuttoning the top two buttons. The idea is not to look relaxed but infallible.

The first thing I tried mine on with was a pair of skinny grey jeans, and it was unspeakably boring. I was walking my friend Yana home in this demoralizing ensemble when she pulled me into a store where she had been stalking a waistcoat during the sales. She had developed a sado-masochistic relationship with the sales staff and thought that one of them, Edouardo, could help me. “Ah, oui, c’est un petit peu triste [Yes, it’s a little bit sad],” said Edouardo. He sent me to the change room with Citizens of Humanity floral trousers. Admittedly, they gave the outfit the shot of something it needed, but I am not a fan of flowers. Edouardo wordlessly disappeared into the back and returned with flame-spewing Miu Miu sandals. These were the philosophical antithesis of the prudish and pristine SSBU, and they looked terrible with the flowered pants. “Get rid of the shirt,” urged Yana. “Write about the sandals.” Edouardo came back with black Isabel Marant high-tops.

We all agreed that the whole thing looked better than what I had come into the shop with. “How about this?” suggested Yana, handing me a grey Marc Jacobs skirt that was bunched up in the front and had a yellow stripe running along the hem. It was just eccentric enough to look interesting, but it had an ascetic quality that went well with the SSBU. “It’s not very sexy,” said Edouardo, but Yana and I quite liked the Africanmissionary vibe. She finally bought her waistcoat, and then I walked her home.