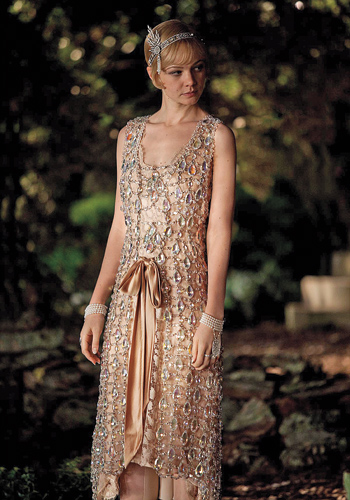 It’s hard not to be immediately charmed by Catherine Martin. As she speaks over the phone from her home in New South Wales, Australia, her two kids chatter away in the background and she laughs throatily, apologizing for the chaos. It’s so disarmingly normal that I almost forget I’m speaking with the two-time Academy Award-winning powerhouse behind the costumes and production design of Romeo Juliet (1996) and Moulin Rouge! (2001), as well as the highly anticipated big-screen adaptation of The Great Gatsby, which hits theatres in May. “The last time I read Gatsby, I was a teenager and I didn’t connect with the characters very much,” explains Martin, almost apologetically. “But my husband had been trying to make the book into a movie for 10 years. At his encouragement, I reread it and I became its greatest fan!”

The husband Martin is referring to is Baz Luhrmann, director of The Great Gatsby and her cinematic partner in crime. College sweethearts, they met on the set of a student production at the National Institute of Dramatic Art in Sydney and have been working together ever since. In fact, it was Martin who dreamed up some of the hyperbolically stylized visual touches, like the lavish sets and über-theatrical costumes, that have become hallmarks of Luhrmann’s films. “Baz always describes the experience [of working together] as a conversation,” says Martin. “Sometimes it’s a very spirited conversation with raised voices—irritated, screaming voices!” She pauses and laughs. “But we have a great time doing what we’re doing.”

Lately, everything they’ve been doing has revolved around adapting The Great Gatsby for the silver screen. If you have fuzzy memories of F. Scott Fitzgerald’s “great American novel,” here’s a quick refresher: The story follows the doomed romance between Jay Gatsby and Daisy Buchanan amid the decadent excess of the Roaring Twenties. The film version boasts an A-list cast, with Leonardo DiCaprio in the title role and Carey Mulligan as the object of his obsession. As the production and costume designer, Martin created 42 individual sets and collaborated with fashion legend Miuccia Prada to imagine each character’s look.

To prepare, Martin pored over Fitzgerald’s text. “From a costume perspective, there were things that really confused me,” she admits. “At the first party at Jay Gatsby’s, for example, Nick Carraway [Tobey Maguire] wears a dark-blue blazer and cream pants.” This struck Martin as strange, because—as anyone who has ever seen an episode of Downton Abbey can attest—during that era, it was customary for wealthy men to dress for dinner in evening coats and starched white shirts. But as Martin delved into her research, she realized that, rather than being an editorial oversight, the description was actually an accurate indicator of Nick’s privilege. “The collegiate preppy look—the look that was championed by Brooks Brothers—was a sign that you were of an elite class, an Ivy League fraternity,” explains Martin, her voice as confident and measured as a university professor’s. “It was a sign that you were part of an echelon of society that didn’t need to subscribe to Old World norms [symbolizing] the desire to overthrow traditions, the need for modernity and the casualization of America.”

Martin’s sartorial interpretation of Daisy, however, confirms that Nick’s ensemble is about all that’s casual in the costume department. Mulligan’s character is resplendent in fish-scale sequined dresses topped with mink, ball gowns embroidered with pearls and crystals, and more bling than the eye can process—looks that took a team of 90 people to create. Martin describes Daisy’s style as “incredibly extravagant, luxurious and whimsical”—a fitting description for the visual wonders she and Luhrmann have given the world.

How to wear this season’s 5 hottest fashion trends
Shopping guide: How to wear the top fashion pieces of the season
The top 8 Canadian style blogs