From wax paper to horse hair, Fall 2012 fashion has been infused with innovative fabric choices. 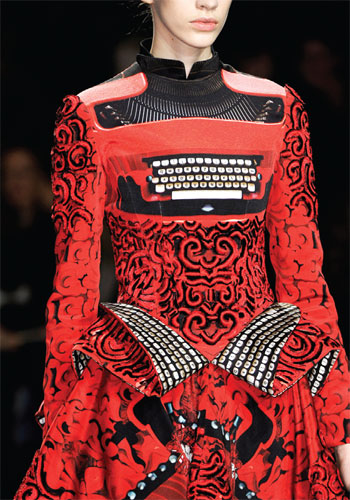 Is that waxed paper?" "Do you think they rolled those trousers in warm tar?" Even journalists sitting in the front row at fashion shows, leaning forward and squinting to get a closer look, are having an increasingly difficult time identifying designer fabrics.

The Fall/Winter 2012/2013 season was particularly rife with guesswork. Alexander Wang tricked fashion’s most gimlet-eyed with licorice-black leather and canvas garments whose surfaces were texturized with corrugation and plasticization.

At Calvin Klein Collection, creative director Francisco Costa cinched coats and dresses made from dense wools or bonded polished leather with metal-banded belts. His mixed media included gleaming bonded-leather shifts contrasted with the depth of his woolly toppers, whose fabric texture had a stippled, patterned effect.

The driving force behind the trend? High-tech-fabric breakthroughs coupled with designers’ desire to create unique pieces that are as difficult to make as they are to knock off.

"Exclusivity has always been an important factor in the highend designer market," says Behnaz Sarafpour, a New York-based designer.

Mills in Italy, Switzerland and France created Sarafpour’s fall fabrics, which resulted in dresses hemmed with bonded horsehair, sweaters in jersey with alternate rows knitted with fringe to create a tufted-fur effect and copper jersey with metallic pigment printed on the surface to create a liquid-lamé effect. Run-of-the-mill cotton/poly blends these are not.

"With new technologies, there is always a level of experimentation, and sometimes it takes many trials until you achieve the ideal results," says Sarafpour, who nonetheless believes that this "long and costly" process is worth every hour and penny.

"The [textiles] are one of the most important factors that give us an edge [over fast fashion] because they’re hard to copy at a lower cost," she explains. "You can get a similar effect, but it will never have the luxury or the durability of the real thing. The fabrics we work with can last for decades."

That isn’t to say that high-street brands aren’t playing with textile innovations of their own. The fall runway collection from
Joe Fresh, for example, includes interesting-and, it turns out, just as uniquely customized-texture combinations such as
patent leather and shearling, wool and neoprene, stiffened felt, tweed and printed silks.

"You want to have this original voice and position that comes through," says Joseph Mimran, creative director for Joe Fresh. "The hard part is how you get heard in the noise!"

A few seasons ago, Mimran aimed to differentiate his brand from those with similar price ranges by introducing neoprene, a rubbery synthetic, in skirts and toppers; this fall, neoprene showed up in tops too. It has become the brand’s signature and continues to evolve: Mimran promises that a new top-secret technique will make it as light as air for next spring.

"Fabric [selection] used to mean that you’d go to Europe, look at fabric before you started your season, throw it on a judy and see what it could do," he recalls. "Fabric dictated what you did. Today, there are shapes you have in mind and all of a sudden you’re turned on to the fabrics that can make them."

This season, that sense of possibility led to the creation of a glossy shearling jacket, the subject of a wet-look coating technique executed on affordable faux shearling instead of the sheepskin that a luxury brand might choose. "Their garment would be $4,000, [whereas] ours would come out at $69," says Mimran, who acknowledges that price isn’t the only difference.

"There’s a disparity, but sometimes you can get a really similar look and feel and, in a way, it almost looks more modern in some instances than using natural fabrics." As designer associations continue to lobby for intellectual-property rights in fashion, original textiles and ingenious fusions of fabrics thwart copycats – or, at least, delay the inevitable.

"The best partner in this battle is a great textile designer," says Sarafpour. "A customer who has a refined eye recognizes and supports this type of high quality. High-tech designer fabrics are hard to copy because other countries may not have the machinery or know-how to copy them.

The tech world is responsible for another
major fashion trend: the rise of digital printing. Faster and less expensive than the old-fashioned way of printing screens onto fabric by hand, digital accessibility has created an explosion in unique patterns.

In London, Mary Katrantzou transfers computer-manipulated photographs of unicorns, typewriters and labyrinths onto silk and satin to create her surrealist-tinged digital collages.

Nicole Miller, one of the first designers to explore the possibilities of digital printing, has taken the process a step further by experimenting with printing on unusual textures, like digital-fused neoprene, for added dimension.

"Digital printing on new textures requires a certain amount of trial and error," she explains. "Felting, for example, which is a vintage technology, needs to be done with great care."

For fall, Miller’s groovy 1960s look was inspired as much by Jimi Hendrix as by a book on vintage techniques. The result? Scuffed-print leather skinny pants, fusions of lamb leather and mesh and gilded dresses of pixelated tweed.

Still, for many designers, the race to fashion’s future conceals a healthy respect for the past. "As we develop new technologies, I think it’s extremely important to keep some historic techniques alive," says Sarafpour, who cites a particular admiration for artisanal guipure lace – a technology dating back to 1800s France in which embroidered elements are held together by large connecting stitches-not only for its look but what it represents in the larger context of fashion continuity.

Today, Siegel’s collections feature skills informed by the people she met on her travels, like the elaborate embroidery by the women of India’s Rabari tribe and techniques by Ajrakh block printers, who hand-carve prints onto wooden blocks.

"It’s very different," Siegel says of the effect-and the feeling-inspired by traditionally handmade garments. "Nothing is exactly the same. It’s finished extremely well but always has that element of asymmetry."

Whether it’s through digital manipulation of prints or unusual three-dimensionality in fabric, designers are clamouring to convey that elusive quality of care and uniqueness. "Individuality," suggests Siegel, "is more important now than ever before."