Who's in and who's out in the front row. 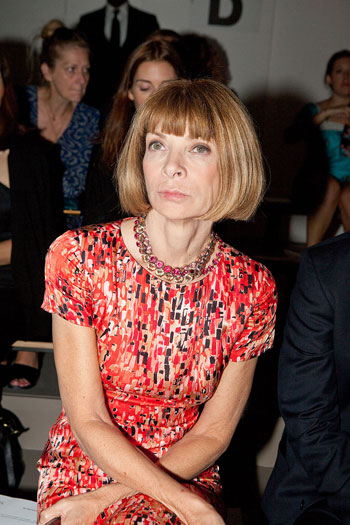 Sometimes watching the front row of a fashion show can be more entertaining than studying the catwalk itself. You can count that the usual top editors and A-list actors will claim their coveted front row seats, and that certain runway groupies will make an appearance. (Leigh Lezark, I’m talking to you. You’re at everything but I’m still not certain what your job is!) Seating at the shows is as political as the seating at a high school cafeteria: If you’re in, you’ll be rewarded with a plum spot. If you’re out, you’ll be relegated to Siberia with the rest of the band nerds. The front row of a fashion show can be a soap opera: who’s there, who is conspicuously absent, and who was seated next to who. Here’s our roundup of the top runway scandals from the international fashion weeks.

It’s no secret that
Victoria Beckham is dying to appear on the cover of US
Vogue. At her Fall/Winter 2012 presentation, she conspicuously sat her drop dead gorgeous hubby, David “goldenballs” Beckham beside Anna Wintour, hoping he’d charm the sunglasses right off the notoriously frosty editrix. The jury is still out as to whether it worked, but it really was a genius manoever on Posh’s part!

When Pulitzer Prize winning fashion writer Robin Givhan wrote a lengthy story for
Newsweek last January, which declared that Karl Lagerfeld was “overrated,” she knew there would be fallout. “I’ll wait till I get to Paris and see if a dead fish arrives at my hotel instead of an invitation to the
Chanel show,” she told the
Toronto Star dryly. Not exactly a dead fish—but the front row fixture did say “a pair of binoculars might have helped” her see the show. Don’t mess with the Kaiser!

We round out more runway scandals on the next page…

Runway scandal: Behind frenemy lines
Let’s talk about the first lady of French fashion for a minute, Carine Roitfeld. When the former editor-in-chief of Vogue Paris announced she was leaving the magazine she had helmed for 10 years, tongues began to wag that she had been unceremoniously dumped. Then Emmanuelle Alt took over and rumours swirled that the former colleagues and friends were on the outs. Finally, at the Altazurra show during New York Fashion Week, Alt arrived to claim her front row spot. “No sooner had she gotten settled when a publicist whisked her off to a different section,” reported Stylelist’s Christina Anderson. “Presumably her relocation was due to her proximity to Carine Roitfeld, who swept in moments later with her daughter Julia and plopped down right next to Emmanuelle’s original seat in the front row.”

Runway scandal: Star system
Every designer knows that the secret to getting tons of press coverage is having a stacked front row of boldface names: but did you know most of those celebs are paid cash to attend? “It’s so unprofessional,” said designer Nicole Farhi about the process. “I have never paid a celebrity, and I never will. It’s stupid.” The French-born style star, who shows her collections during London fashion week, then added “What do they show you in the papers after a fashion show? Not the clothes, but the celebrities who are paid to be there!” For celebs like Rihanna and Beyonce, the going rate for sitting in the front row is reportedly a staggering $100,000 per show. The Olsens command $80 K each. And considering that fashion shows last on average about 15 minutes a pop, that’s a lot of coin for literally sitting still and looking pretty!