From the runway to the boardroom, these top model moguls have turned their famous faces into million dollar businesses. 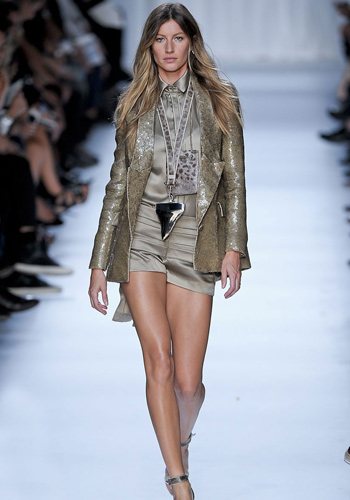 Forget
models-turned-actresses—we’re more interested in those catwalk superstars who have managed to segue their good looks into multi-million dollar business ventures. From Gisele Bundchen to Heidi Klum, here is a roundup of the world’s highest paid models. You may be surprised at who has the highest net worth!

It’s hard to think about Gisele Bundchen for any length of time without the green-eyed monster making an unwelcome appearance. Not only has the 32-year old Brazilian supe fronted campaigns for top fashion labels like Givenchy, Versace and Missoni, but she’s also married to super handsome star quarterback Tom Brady, the mother to an adorable tot (and apparently has another one on the way!)
Plus, she has the best hair in the business. Oh, and did we mention she’s also reigned as one of the top-earning models for the last seven years in a row? With an intimate apparel line, a line of sandals, a licensing deal to create eco-friendly cosmetics and lingerie,
Forbes is predicting that she’s on track to becoming the first model billionaire.

Okay, she hasn’t appeared on a runway in years, but believe it or not, Kathy Ireland is amongst the top earning models in the world. The 49-year-old cover girl (who was famously featured in
Sports Illustrated’s swimsuit issue an astounding 13 years in a row) has to-date published six books. Plus, her namesake line produces everything from linens to cribs to wedding dresses. In fact, since her brands sell $2 billion dollars worth of retail products each year, Ireland actually banks twice as much as Martha Stewart annually.

Even though Heidi Klum may be better known as the host of
Project Runway than for her work as a supermodel (she famously hung up her Victoria’s Secret angel wings in 2010) she’s one of the biggest model moguls out there. With two fragrances (“Heidi Klum” and “Me,”) two maternity lines, a women’s active wear clothing line, a music album, a book under her belt, it’s a wonder the 39-year-old German born beauty has time to sleep!

At 39 years old,
Kate Moss is still one of the highest paid models in the business. Not only does she still land coveted magazine covers and occasionally appear on the catwalk—we loved her fierce jaunt down the Spring 2012 Louis Vuitton runway, smoking a cigarette, naturally—but she also makes a small fortune with lucrative endorsement deals. For Fall 2012, she’s pulling double duty: First as the face of Rag & Bone (the campaign was shot by Craig McDean), and then, in the Liu Jo Jeans Fall campaign. With fragrances, design stints, and appearances on TV and in films (she’s rumoured to star in the
Absolutely Fabulous movie!), Moss, who first popularized the heroin chic look in the early ’90s is showing no signs of slowing down.

Fashion accessories: The muses behind designer it bags

Spring/Summer fashion trends: The most stylish food inspired looks from the runways