We count down the top runway model movie stars in this summer’s biggest blockbuster hits. 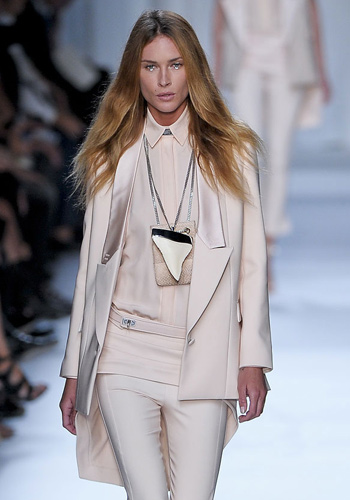 Ever since Brooke Shields segued from magazines to movie posters, models turned actresses have ruled the silver screen. We count down our favourite runway models turned movie stars in this summer’s biggest movies.

It Brit Lily Cole may be best known as a catwalk superstar who has walked the runway for high fashion design houses like
Alexander McQueen, Chanel, Louis Vuiton, Prada and Moschino. But the doll-faced redhead, who first made her big screen debut in Heath Ledger’s final flick
The Imaginarium of Dr. Parnassus has turned her attention to the silver screen. This summer, she battles evil Charlize Theron in the Kristen Stewart film
Snow White and the Huntsmen. We think Theron has a bit of competition in the “fairest of them all” category.

All-American stunner Erin Wasson has modelled for some of the biggest photographers in the business, including Mario Testino, Steven Meisel and
Ellen von Unwerth. A true creative chameleon, Wasson later launched a career as a professional stylist for Alexander Wang, and then transitioned into fashion design with jewelry line Low Luv and surf apparel label RVCA. This summer, Wasson is taking on the big screen in
Abraham Lincoln: Vampire Hunter as the bloodthirsty vixen Vadoma.

"Shooting this film was an incredible experience," Wasson told the press. "It was my first time on a production of this caliber. You wouldn’t believe the grand nature of the shoot! One day we are shooting on a plantation outside of New Orleans on horseback, and the next I’m in the middle of an epic battle scene at Gettysburg. American history plays a large part of the film, but then it’s juxtaposed with this untold story about Abe hunting vampires because of a personal vendetta. I learned a tremendous amount throughout the process, from live-action combat training to special effects. Being on set was a huge, eye-opening experience."

Read about more model movie stars on the next page…

The Aussie supe, who famously took a break from modelling after being criticized for her fluctuating weight, first made her big screen debut in the Liv Tyler horror flick
The Strangers in 2007. Now, Gemma Ward is set to appear in Baz Luhrman’s hotly anticipated retelling of
The Great Gatsby starring Leonardo DiCaprio and Carey Mulligan. Ward was last seen as Tamara, queen of the mermaids, in
Pirates of the Caribbean: On Stranger Tides.

Sports Illustrated swimsuit model Brooklyn Decker first ventured into TV with appearances in
Chuck and
Ugly Betty, but it was her comedic turn in
Just Go With It that garnered her major industry buzz. Since then, she’s appeared in the stars-studded cast of
What to Expect When You’re Expecting and in the big-budget flop
Battleship.

“I’m still studying to get better,” Decker told
The Hollywood Reporter about her acting chops. “And it goes without saying that I have a lot of room for improvement.” Has her runway background helped with the audition process? “Sometimes people are like, ‘Oh, is that girl the model?’” she says. “But I think it’s opened doors because of my background!”

Spring/Summer 2012 trends: The best food inspired looks from the runway