ELLE World: Georgette Gagnon, the voice of the voiceless

Canadian Georgette Gagnon opens up about the realities of being a human right advocate: the danger, the hearbreak, the passion. 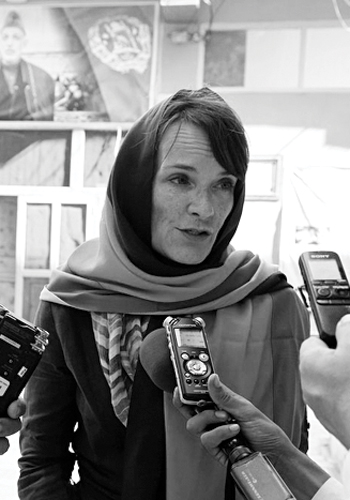 I met Georgette Gagnon in a midtown Toronto café on her last day of a holiday to visit family and friends. She was dressed casually in a plain white T-shirt and blue jeans. While her attire didn’t elicit a glance from the guy working on his laptop or the moms chattering over lattes as their babies slept in strollers, for her, the outfit represents freedom.

More ELLE WORLD: A closer look at the clothing industry

Since May 2010, for her role as director of human rights for the United Nations Assistance Mission in Afghanistan, Gagnon has lived in the Afghan capital, in a secure dormitory-like building. Here, when she ventures out, instead of a T-shirt, she wears a bulletproof vest—and covers her body from her neck down to her ankles to show respect for the local culture.

Running a staff of 81 human-rights officers across the country, she doesn’t want to stand out as she listens to people’s stories of trampled human rights. “I’m their voice, and the people I work with are their voice,” she says simply. “Interviewing people and reporting on abuses is what we do to try and convince those in power, particularly governments, to make changes in policy and practice, to end human-rights violations and to hold the perpetrators accountable.”

It’s a far cry from the comfortable existence the Calgary-born, Osgoode Hall Law School-educated lawyer could enjoy back home in Canada. But Kabul is only the latest stop for Gagnon, who thrives on a danger-filled life of service.

Serious, and very coy about her age, she wants to be out in the field, recording the toll of conflict: documenting the story of a mother who saw her children killed; talking to a young girl running away from an arranged marriage; or listening to boys who were abducted and forced to become soldiers. “It’s all hard, but children are the hardest,” she says.

In her Kabul office, Gagnon keeps a photograph that reminds her of why she chose this career. Taken in 1999, it is of two boys no older than 15, all skinny limbs and wearing torn combat fatigues. She met them in a camp in Sudan after they had escaped from a government military base and run more than 30 hours through brush and desert.

“I’d just hiked two and a half hours into the Sudanese camp, and late that night these two kids came running in. They were traumatized, scared and exhausted, and they described how they had been abducted in the street in Khartoum by government soldiers and trained to attack villages, shoot their guns, loot everything and fight their own people,” she says. “They were trying to look tough, but their eyes gave them away.” Gagnon explains that when she feels down, or if all the stories begin to meld together, “I look at their faces and I carry on.”

Gagnon is also motivated by the results of her work. “After our team in Afghanistan documented and reported on the use of torture in some detention facilities, top Afghan authorities took measures to stop such abuses,” she says. “And our reporting on, and advocacy of, enforcement of the law on elimination of violence against women in Afghanistan led to improved protection for women.”

Graeme Smith, a former journalist who’s now the Kabul-based senior analyst for the International Crisis Group, met Gagnon several years ago, when she was the executive director of the Africa Program at Human Rights Watch. “She is the conscience of the war,” he tells me. “After hearing about civilians getting tortured to death or some other nasty incident, it’s not unusual for people in Kabul to ask ‘Does Georgette know?’ She is relentless in the effort to document such ugly facts.”

More ELLE WORLD: Beneath a tree in South Sudan

The oldest of five children, Gagnon was born into a family that had high expectations. Her parents, a geologist and a teacher turned provincial Liberal politician, pushed their offspring to respect others and respect themselves. “Professional and personal development, volunteering and choosing a career that provides service to others were paramount,” she says. Young Georgette hung with the “smart crowd” and decided in high school that she would be a lawyer. She liked that this métier would enable her to be strategic, apply laws and standards to facts and deliver justice and remedies for abuses.

While in university, she spent summers as a nursing assistant, caring for children with cerebral palsy and seniors who couldn’t function on their own. “I emptied their catheter bags, bathed them and took them for walks,” she says. “You really learn about people that way. I learned to be empathetic. It was especially tough to see kids with CP. They were institutionalized and it wasn’t their choice.”

After law school, Gagnon worked on the front lines of Ontario’s justice system, first for the Attorney General and then as chief of staff to the Solicitor General. She then went to work for a major law firm but kept searching for something else. In April 1994, she joined a federal team going to South Africa to observe the country’s first all-race election after the end of apartheid. “It was a transformative experience. There were lines that snaked for hours as people waited to vote for the first time in their lives,” she says.

As the three-day vote wore on, she saw a man dragging himself along the road to the voting booth. “He was maybe 50, his body severely twisted from some unknown condition, but even though he couldn’t walk, he was determined to cast his ballot,” she recalls. “I helped him because his fingers couldn’t hold a pencil. When I showed him the list of candidates, he said one word: ‘Mandela.’ In that moment, I knew what I wanted to do with the rest of my life.”

Just as her parents had taught her, she would serve her community—only it had grown from the confines of hospitals and courtrooms to the troubled world at large. The following year, Gagnon travelled to Rwanda as a UN volunteer. She remembers one instance, in Kigali, when prison guards shut the gates behind her group and they found themselves in a tiny yard so packed with detained men and boys that there was barely room to walk in single file.

“There were faces, arms and legs stacked atop each other, reaching out to touch me, pleading for help. It was one of the few times I lost it,” she recalls. “I went outside afterwards and I just broke down. I cried for about an hour.”

By 1997, Gagnon was earning her master’s in international human rights law at the University of Essex in the United Kingdom. She then took jobs with various organizations, from Human Rights Watch to the Canadian International Development Agency, always dedicated to Article 1 of the Universal Declaration of Human Rights: “All human beings are born free and equal in dignity and rights.”

Still, it wasn’t an easy career choice; there are no easy days at “the office.” “You have to prepare to be uncomfortable,” she says. “Sometimes there’s no water or electricity and often limited food in the places you travel to, and you deal with officials who don’t want to hear or do anything about human-rights abuses and civilians whose situation or treatment will break your heart.”

Gagnon shares her plans for the future on the next page…

In 2005, during the height of conflict in Darfur, Sudan, Gagnon was taken to a small house in the middle of the night to speak with witnesses and survivors of attacks where whole villages had been killed or displaced. She recalls one young girl, her face lit by candlelight, who whispered: “Everybody is gone. They killed my brother and my father. They raped my mother. How do I get an education? I want to be a teacher. Can you help me?”

Gagnon paused. “I answered by saying I was there to listen to her, to understand and document what happened and help bring an end to the abuses so she and other people could resume their lives and return to their homes safely. It’s difficult–but you can’t fix each person’s problem. You have to serve as their voice in the world at large and be their advocate before people in power who are making decisions that affect their lives.”

Often, the job puts her own safety in jeopardy. Like the time in Sudan when she and colleagues were kept as “guests” of a warlord, while guards with semi-automatic machine guns and rocket-propelled grenades stood watch. Or in 2012, when she and her team were in Syria as part of a UN mission. Their convoy was en route to document an attack on civilians when a large armed mob suddenly blocked their way and began to hurl concrete blocks and shoot at the vehicles. Gagnon was not so much terrified as angry. “Authorities escorting our convoy were supposed to provide protection,” she says.

Now, in Afghanistan, Gagnon spends long hours interviewing civilians, investigating the treatment of men, women and children in prisons, consulting with Afghan non-governmental organizations and working late into the night to draft reports as civilian casualties continue to mount. It can be disheartening: Between January and August of this year, 2,056 civilians were killed and 3,668 were injured in the country’s armed conflict—an increase of 16 percent over the same period in 2012. And she worries that in 2014, with the reduction of international support including funding and troops, the situation could further deteriorate.

As for her own future, after almost four years in Afghanistan, Gagnon will be leaving Kabul at the end of the year. She plans to return to North America and split her time between New York, Toronto, Calgary and Montreal—but not for long. “My aim is to go back to Syria and help civilians who are caught in the civil war,” she says. “I want to help those in need for the rest of my life.”

Read more:
Writing a new future for the women of Afghanistan
A journey to save lives in South Sudan
One woman’s fight to end child executions
Investigating the road to chocolate in the Dominican Republic