A chat with Patricia Clarkson on her romantic role in Cairo Time. 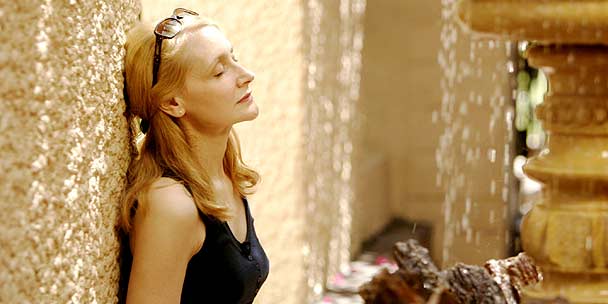 Rita Silvan: You were wonderful and it was a delight to see you in Cairo Time. There is always an added quality to performances you have done. According to the press notes, this is the first time you have played a romantic lead in such a big way?

Patricia Clarkson: Yes, the first time I’ve ever carried a film. It’s rare for a woman north of 40 to carry a film in such a romantic, sweeping, dream-come-true part. It’s a dream come true, it really was, from the moment I read the script. I weary at first of travelling to Cairo as an American. Barak Obama is now our president.

RS: When did you do the film?

PC: A year ago, last summer.

PC: Things have settled now, but not a year ago. There was an enormous anti-American sentiment. I was treated so beautifully when I arrived.

PC: No, I was not the ugly American, which I really thought I would be.

RS: You got to know Cairo two ways: as Patricia and also as Juliette. What was that like? Cairo, in of itself, is a character in the film, the third intricate…

PC: You took the words right out of my mouth. I mean, there is me, Alexander and Cairo. It was life and art imitating, at times, one another. You know I was a middle-aged woman for the first time in Cairo. And so often the journey Juliette was taking, I was taking right along side of her. The interesting thing is, what I realized is that I am not Juliette. I wish, she is a woman I aspire to be.

RS: I think you have a little more spark!

RS: Did you find that energy challenging in Cairo?

PC: It was an awakening for me. As actors we so often think… First of all, we love a lot of bells and whistles and we love big dramatic moments to hang our hats on. We love to…

PC: Right. Juliette was so spare and so simple, the transition I had to make was molecular. It was so internal and it was so challenging in a way that I didn’t realize until I arrived at playing this character. Because I did not want to make Juliette me. I wanted to honour Ruba’s script and become this graceful, quiet woman.

PC: I never said “Thank you” in a film so much in all my life!

RS: You are being swept off and led and everything is kind of there. But as you point out, the change is molecular; it’s very, very subtle. What scene do you feel was the moment where she is over the jetlag; that moment of internal awakening when she realizes she’s in Cairo for a very long time without her husband? That moment when she recognizes that there is this other man in her life and he’s changing things for her?

PC: I don’t think she even realizes. That’s what I wanted to capture. She is a women who I think really accepts that fact that she is going to embrace the city, even though her husband is not there. That’s what I think Ruba achieves so beautifully; the incremental shifts you make when you fall in love. That it is deeply subliminal and it can absolutely happen without an ounce of physical contact. That it is that heart and the mind and often sometimes not the body.

More with Patricia on the next page …

Check out our top film picks from TIFF 09

RS: We must talk about the scene in the train …

PC: Well, that’s when I had given in.

RS: “I could live here,” she says. She is a career person, she has a life, she has freedoms, she may have melancholy, but really who doesn’t? That is part of the human condition. But yet this character says “I could live here” and I was thinking as I watched that scene, “No, you couldn’t.” Does she really mean it or does she just mean it in the moment?

RS: When you are preparing a character do you draw on yourself? Do you write a life story for the character?

PC: Oh goodness no. Yes, there is much of me in Juliette but a different facet and there is a lot of me that isn’t. It is what you keep in and what you really take out. It is often what you take out that is the hardest place to get to. These are the things I’ve relied on as an actress that I could not use as Juliette.

RS: Can you give me an example?

PC: You know my ability, my wit and my smile. Because Juliette smiles in a very different way than I do. My physicality; I’m a very physical actress and she is just physically contained.

PC: Even in that rhythm of New York, Juliette would have a calm centre. Yes, I think the two of them… you know its hard because Cairo is invasive even in a way that I don’t think New York can be. It’s infiltrating and so I think it of course it changes the tambour of the whole film. I do think that if they met in New York it would be successful because they are similar spirits. With Hollywood films it is usually about how opposites attract, but they are very similar. They are two rather ordinary people.

RS: This Film Festival is interesting because it is the third film that has an almost identical theme ( PARTIR and I Am Love). I was interviewing Isabella Rossellini and she made the comment that men don’t find middle-aged women alluring. It’s not that she is not interested in being with someone; it is that men are not interested in her. She is stunning. It is very interesting that you have these three very powerful films with almost identical themes.

PC: We are almost the same age.

RS: I was wondering if there is this sense of women saying this is my last chance to live a passionate life, to be passionate.

PC: What I think is slightly different about this film is that I think I have a very passionate relationship with mine. I think we have a really fulfilling sexual life. I think I have the normal ups and downs of married life. And look at Tom: Tom is a beautiful man. I think I am incredibly fulfilled emotionally, sexually, intellectually. He has a rigorous life and we are separated a lot. I don’t think I am looking to… and that’s what I think is a challenge in this film is I wasn’t missing anything. I had to play a rather fulfilled woman who just serendipitously has this man come into her life.

RS: When you are finished with a part do you have any ritual, or do you do something to say: “Ok, now I’m closing this down.” I imagine characters are always with you to some extent. PC: No, they just transition out of you. You leave a location. At one moment relief and despair simultaneous in me. I don’t know that I have a ritual or a system but they eventually go away. Juliette was hard and it was just all of it that was hard to leave behind. Then a month later I’m back in my New York and life goes on.

Read more
Our daily TIFF blog behind the scenes