The chill of fall may be in the air, but this trio of whimsical new movies is sure to -- warm you up this November. 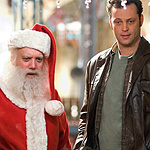 If you enjoy holiday films that are more naughty than nice — (personally, I’d take Bad Santa or The Ref over A Christmas Carol any day), then you’re in for a treat with Fred Claus. Directed by David Dobkin (Wedding Crashers), this twisted Christmas tale stars Vince Vaughn as Fred, the black sheep of the family who’s lived his entire life in his famous brother’s shadow. Try as he might, it’s easy to become bitter when your do-gooder younger brother Nicholas (Giamatti) is truly a saint. A repo man who steals what he repossesses, Fred’s nefarious deeds have finally caught up with him, landing him in jail and it’s up to Nicholas to bail him out. Under one condition: Fred must move back to the North Pole and repay his debt to society by making toys. The problem? Fred isn’t exactly your average productive little elf. With a penchant for making trouble and an attitude to boot, Fred threatens to derail the finely tuned operation that his industrious brother has built, ultimately putting the patience of a saint to the test. With a cast that includes Oscar-winning luminaries like Kevin Spacey, Kathy Bates and Rachel Weisz, not to mention rapper-turned-actor Ludacris as an angry elf, this is an early Christmas present that we can’t wait to unwrap.

The story of how Natalie Portman signed on to this holiday comedy might be just as fanciful as the film itself. While Portman was filming V is for Vendetta in Berlin, she received a script from screenwriter Zach Helm (Stranger than Fiction) containing his directorial debut for Magorium and a note which read, “Natalie, I want to make something as meaningful to kids as boxed apple juice and raisins and roller coasters.” Portman immediately signed on to play the role of Molly Mahoney, the shy manager of a magical toy store. Shot on a Toronto sound stage, Dustin Hoffman who longed to star in Charlie and the Chocolate Factory before Johnny Depp won the part, sinks his teeth into the Wonka-esque title role of the 243-year-old inventor. Held back a year to get primo positioning in the competitive 2007 American Thanksgiving-Christmas holiday market, we’re not sure if this film will be more feast than famine, but with a treasure chest filled with quirky surprises, this eccentric little film earns big points for novelty.

Disney takes on Manhattan in this daring, adult-friendly comedy. Amy Adams stars as cartoon Princess Giselle, who’s blissfully betrothed to the handsome Prince Edward (Marsden). That is, until an evil queen (Sarandon) banishes Giselle from the animated kingdom of Andalasia to the mean live-action streets of New York City. Ousted from a land where every interaction requires a burst into musical song, Giselle is thrust into a less-than-storybook existence until she meets a dreamy lawyer (Dempsey) who helps her come to terms with life in the real world. Boldly combining traditional Disney animation with live action, this dazzling spin on the modern-day fairy tale is a risky departure for Disney. Yet with a premise that’s so unpredictably refreshing, you’d have to be a Scrooge not to delight in Enchanted.

What are your fave holiday movies? Share them with other readers in our forums!