Nadine Coyle says Girls Aloud will ''definitely'' do something for their 10th anniversary next year. 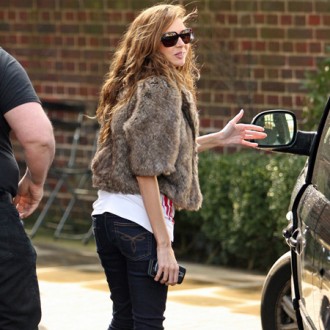 Nadine Coyle has confirmed Girls Aloud will reunite for their 10th anniversary next year.

The singer says she and her bandmates – Cheryl Cole, Sarah Harding, Nicola Roberts and Kimberley Walsh – will “definitely” do something in 2012 after the group took some time out in September 2009.

She told internet radio host Dean Kelly: “We always discuss doing a 10-year reunion thing. So that’s going to be next year.

“We’re definitely going to do something. But it’s a whole huge production. Girls Aloud is not just us five, there’s like us five plus a ridiculous team of 50 who travel with us, it’s amazing

Their manager Hilary Shaw also confirmed they will get back together, although a new studio album is “unlikely”.

She added: “Everybody wants them to make a comeback and it will be next year. Well, it is their 10th anniversary so there will be something.”

“They speak all the time, and that includes Cheryl and Nadine with the other girls. Cheryl is keen to get back with the girls, and is planning something which could be a one-off or some gigs.”

It had been reported Nadine and Cheryl had fallen out as they both attempted to launch solo careers and were no longer on speaking terms.

It had previously been claimed the group – who were formed on reality TV show ‘Popstars: The Rivals’ in 2002 – were in talks to perform at a music festival being held to mark the 2012 Olympic Games in London.

A source said “The girls are getting very excited. The promoters are only looking to book massive show-stopping acts, which they would be perfect for.”