The profound impact of Dynasty on fashion 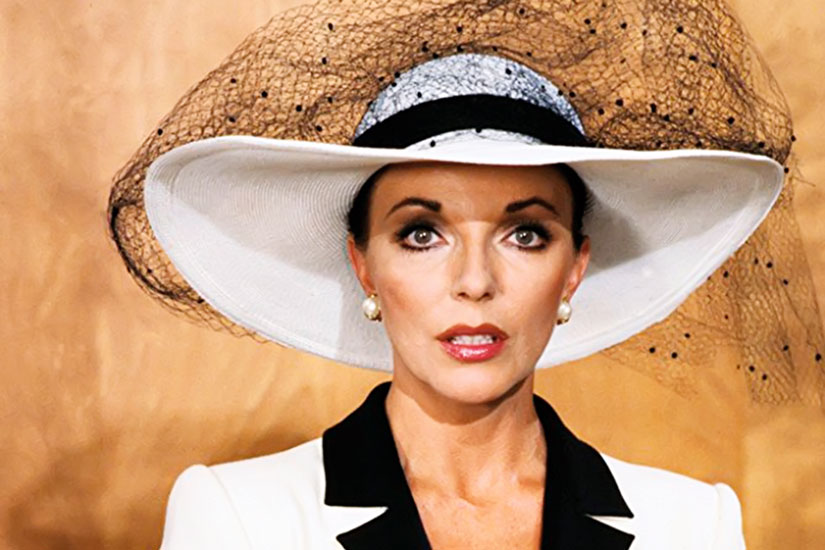 In the late 1980s, when I’d stay up way past  my bedtime, Alexis Carrington waltzed into my life, demanding presence as I’ve never seen a woman do on the  small screen. The iconic Dynasty character, played by the  incomparable Joan Collins, was a sight to behold, gliding through my television in big-shouldered power suits,  sumptuous furs, oversized hats and glistening jewels. She  was my first fashion memory, and her impact on me was profound. She wore her clothes like armour—and she  needed plenty of protection as a lone woman running a  billion-dollar oil corporation with an enemy list that  crossed oceans. When she spoke, it was with a posh  British accent and perfect diction not unlike Princess  Diana’s, except that Alexis could hiss her famous put-downs with very unladylike delight. She was television’s first bitch, and she was entirely unapologetic about it.

“I have a reputation that is unpredictable, devious and manipulative,” she declared on one occasion. “I cherish that reputation because it keeps my enemies off guard.” Her enemy number one was ex-husband Blake (John Forsythe), a silver-haired oil tycoon who had recently married a statuesque blonde—Krystle (Linda Evans)—with the personality of a cardboard cut-out. Alexis’ only weakness was that she was still in love with Blake, and since she could no longer have him, the next best thing was to destroy him. She did so by marrying his even wealthier oil-tycoon rival (who conveniently dropped dead minutes after the wedding) and then launching a corporate war against Blake’s company.

Although I’d been on earth for less than a decade, I understood that the business world was not stacked in women’s favour. Alexis didn’t lean in; she bulldozed through the glass ceiling. In an iconic scene, she marches into the Carrington mansion, in a sparkly white dress, no less, and announces her takeover of Blake’s estate: “Take this junk, and your blond tramp, and get out of my home!” Despite her immorality, I couldn’t help but root for her. Alexis was TV’s first female anti-hero. She was the Carrie Bradshaw of the ’80s, but bitchy, and she opened doors for ambitious mean girls like Blair Waldorf (Gossip Girl), Claire Underwood (House of Cards), Cookie Lyon (Empire) and even Cersei Lannister (Game of Thrones).

Set in Denver during the oil boom, Dynasty was a show about the 1 percent, and it ran for the entirety of Ronald Reagan’s presidency, from 1981 to 1989 (not a coincidence). The Carringtons lived in sprawling mansions and ate caviar as if it were jam. “For many Americans, watching Dynasty felt like having an intimate view of the lives of the hyper-rich,” says fashion writer and historian Laura McLaws Helms. “[Series co-creator] Esther Shapiro realized that they wanted this type of life badly enough that they would be open to purchasing their way into it—and the Dynasty licensing empire was born.”

But it was really the fashion that made the fantasy come alive. Executive producer Aaron Spelling’s finest hiring decision—after Collins, of course—was costume designer Nolan Miller, who had previously worked on another Spelling vehicle, Charlie’s Angels. Miller was given a weekly wardrobe budget of US$35,000 (which is equivalent to close to a staggering $104,000 today!), about a third of which went toward outfitting Alexis. He created more than 3,000 outfits over the course of the series, with more than 700 for Alexis alone. “Dynasty really put Miller on the map,” says Meredith Markworth-Pollack, costume designer on The CW’s new Dynasty reboot. “[The impact] was so significant that people wanted to look like Linda Evans and Joan Collins.”

The show launched a series of licensing deals that included clothing, lingerie, handbags, shoes, costume jewellery and fragrance. “It was the first television merchandising targeted at the upper middle class, yet it was available to anyone who wanted to buy into a little Carrington magic,” says Helms. “While no other TV series has quite emulated the breadth and diversity of Dynasty’s licensing, the series changed the way networks and studios understood and exploited their products.” The show very much established the close relationship between television and fashion that we now take for granted.

My mom’s closet was nothing like the women’s on the show, but I would still rummage through shoulder-padded blouses and fur hats to play Alexis dress-up. I’d wrap silk scarves into a turban, decorate it with brooches and then sashay over to the mirror and say, “Get out of my sight, you miserable has-been.”

The show’s fashion legacy continues today. “The taste for large shoulder pads and sequined gowns has evolved and adapted to various styles since then, yet anytime they show up on the catwalks, a comparison to Dynasty is inevitable,” says Helms. With the rise of third-wave feminism, fashion has taken an active role in female empowerment, once again looking to the decade that defined power dressing. “I think the ’80s, in general, are having this revival in fashion, which has been really helpful for me—it’s made my job a lot easier,” says Markworth-Pollack, who took on the difficult task of translating the original Dynasty look for today.

The new costumes are mostly sourced off the rack, with glam pieces from Balmain, Gucci and Alexandre Vauthier for the character of Fallon Carrington (Elizabeth Gillies) and softer shapes from Stella McCartney, Juan Carlos Obando and Johanna Ortiz for Cristal (Nathalie Kelley), a Latina version of Krystle. My beloved Alexis has yet to make an appearance. She is to be introduced later in the season, and the network has not announced which actress will be taking on the iconic role.

Whoever she is, she has some wicked size 7 stilettos to fill. I’ll be watching, of course, to see how she fares in today’s world. I’ve managed just fine thanks, in part, to her. When I was a painfully shy child, Alexis taught me how to discover my inner bitch, a character that has proven useful in numerous situations when being nice was no longer sufficient. She showed me how to use fashion to compensate for my introvert traits and how to claim space by demanding presence through clothing. My closet is filled with volume—sculptural blouses, cocoon-style jackets, fur stoles and, yes, padded shoulders—adding drama to my rather ordinary five-foot-five-inch frame. I’ve accumulated enough gold and silver footwear to take me through all four seasons, enough sparkly costume jewellery to send a light signal into space and a pile of red lipsticks large enough to last me a lifetime. Whenever I’m intimidated by my surroundings, or afraid to speak my mind, my clothes become my armour—just as they were hers.

This article originally appeared in the December 2017 issue of ELLE Canada.