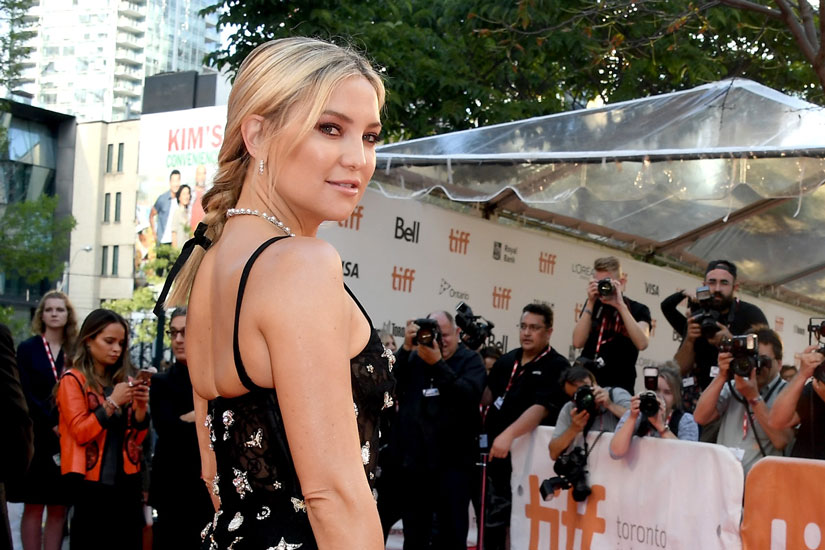 This month, Instagram introduced a tool that allows all users to hide Internet troll snark. Kate Hudson probably won’t be using it. “I loooove reading the comments,” says the avid Instagrammer and Snapchatter. “Blocking [people] is my favourite thing on the planet. Love it.”

Then again, it’s difficult to imagine someone having anything negative to say about her. During a roundtable interview at the Toronto International Film Festival for her new movie Deepwater Horizon, Hudson was as friendly and genuine as your favourite kindergarten teacher.

How did someone who came up in the biz – if you’ve been MIA the past 20 years, her mom is Goldie Hawn and her stepdad is Kurt Russell – remain so chill? “Growing up with parents in the industry gives you a different perspective,” says Hudson, 37. “You don’t come into acting thinking it’s going to change anything in your life or it’s going to make you happier if you find success. You come into it because you really actually enjoy the work and you want to tell stories.”

Kurt – who co-stars with Kate in Deepwater Horizon – says Kate was pretty much born with a love of performance. “We knew from the time she was very little  [that she would be an actress],” he says. “So, it was our job to try as parents to not let that be rushed in anyway. We actually kind of held her back.”

Kurt Russell and Kate Hudson at the ‘Deepwater Horizon’ premiere.

Russell and Hawn didn’t let her work until she was 17. A few years later (which is like two seconds in Hollywood time), she had made it big with her Golden Globe- winning and Oscar-nominated turn as Penny Lane in Almost Famous.

Deepwater Horizon is another milestone in both Hudson and her stepdad’s lives. It’s the first time they’ve starred in a movie together. The film is based on the 2010 BP oil spill in the Gulf of Mexico. Hudson plays the wife of engineer Mike Williams (Mark Wahlberg), who helped rescue his co-workers on the doomed oil rig that caused the spill. Russell stars as Mike’s boss, Mr. Jimmy.

Because most of the movie takes place on the rig, Hudson and Russell only share one scene. Nevertheless they squeezed in plenty of family bonding in between shooting in Louisiana. “We spent a lot of time in New Orleans together,” says Hudson. “And my brother [Oliver Hudson] was there shooting Scream Queens. He had his kids and I had my kids, so it was a family affair down in Nola.”

The pair are already planning their next collabo along with Oliver and Wyatt Russell, Hawn and Russell’s youngest son. So, will it only be a matter of time before Hudson’s two children Ryder, 12, and Bingham, 5, join the family biz?

First, she’s navigating Ryder’s impending teenage years. “It’s a really fun time,” says Hudson. “I did everything fast and early. I was 21 when my career really took off. And then I was pregnant at 23. I had a baby, marriage. Now I’m 37 and I’m a real adult and I’ve got a teenager almost, which is crazy. I have no pressure of anything domestic in my life anymore. And yet, domesticity is one of my favourite things. I’m such a homebody.”

INSTAGRAM VS. SNAPCHAT “I like them both! I think you can tell a lot from somebody by their social media. To me, it’s a creative experience; I just enjoy taking pictures. I think there are certain people who really enjoy sharing and connecting to people and others are like, ‘that’s the last thing I want to do.’”

BIGGEST LESSON “You do make mistakes. I’ve learned that accountability is everything. The second you’re truly accountable for the decisions and the choices you make in your life, it’s like a huge weight is lifted off your shoulders.”