For the actor, the secret to life is structure. 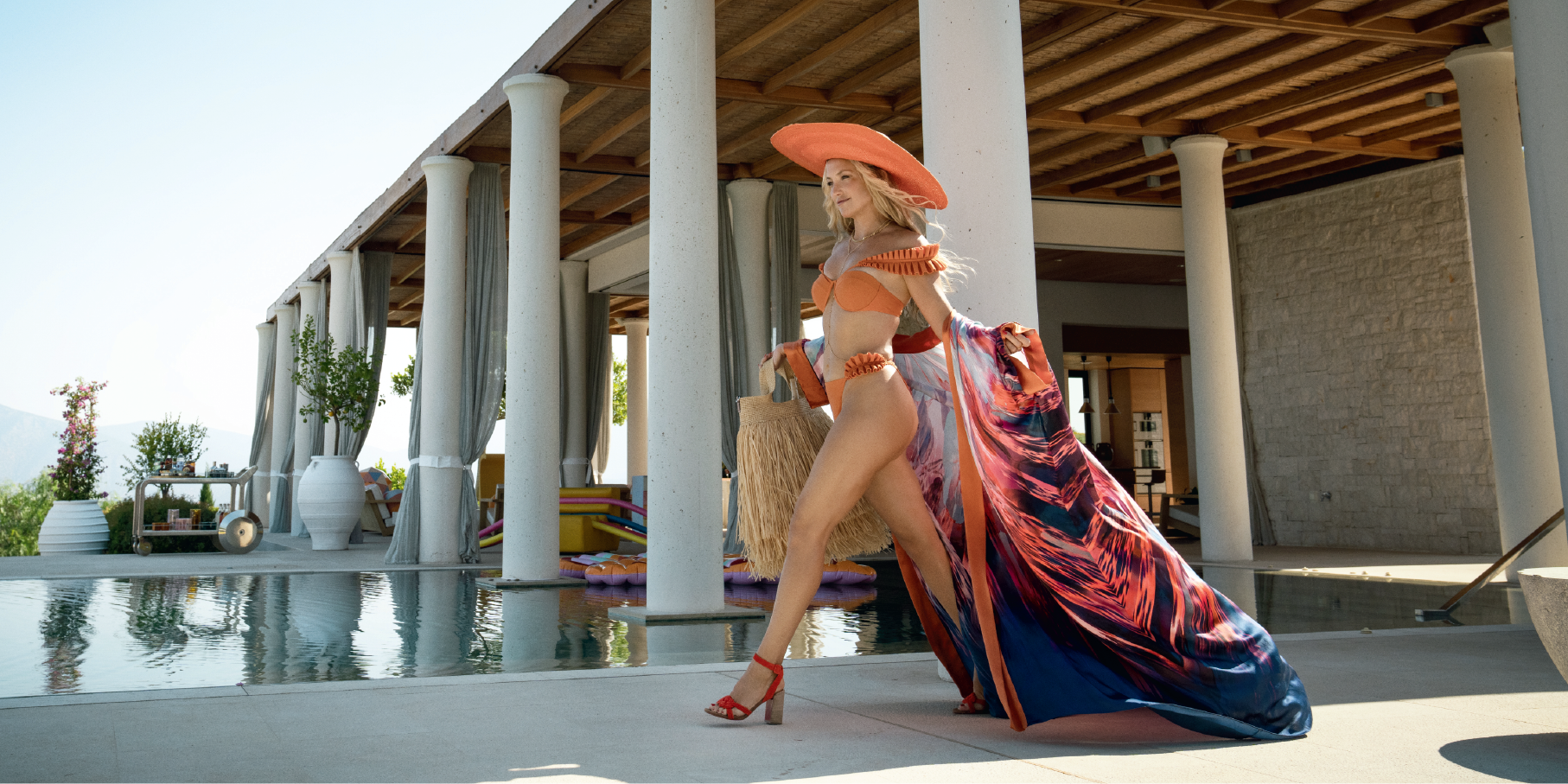 Kate Hudson has it all figured out. She’s an actor, an entrepreneur and a mother of three who’s able to carve out time for her family, her career and herself. The secret, she says, is to have structure. Speaking to me virtually from her home in Los Angeles, the actor shares that she has always been a go-getter but at the same time also gains a lot from being still. “In order for me to create, I need to do nothing [and] have no distractions,” she says. “The only way I’ve been able to make that happen is to have more structure in my life, [which] has given me so much more freedom and so much less anxiety.”

The 43-year-old spends her energy wisely, choosing roles that she’ll have fun playing—like fashion designer Birdie Jay in Rian Johnson’s Glass Onion: A Knives Out Mystery, which had its world premiere at this year’s Toronto International Film Festival and will be released on Netflix on December 23. The follow-up to 2019’s Knives Out is a deliciously layered whodunit that brings back Detective Benoit Blanc, played again by the impressive Daniel Craig. The caper takes audiences to the Greek islands, where Edward Norton’s tech billionaire Miles Bron throws a murder-mystery party that’s chock full of suspects. It’s incredibly entertaining to watch Hudson play Birdie, a tone-deaf character who’s in some of the best scenes in the movie. “To play someone who’s just so out there was really fun for me,” says Hudson.

One significant aspect of that role was the clothing; Hudson lights up when we talk about the outfits in the film. “The first fitting was filled with so much colour,” she says. “There were all these prints and a closet that I just wanted to play in. Birdie is epitomized by the bikini she wears—that look says so much about her.”

When it comes to choosing projects, Hudson says she approaches them all the same, no matter the role. “What I’ve realized after being in this industry for two decades now is that it begins and ends with a great story and a great filmmaker,” she says. “As an actor, when you have both of those things in place, what you put forward is usually going to be in really safe hands, and it allows you to explore all kinds of possibilities with the character and then hopefully make [your] vision come to life.”

Hudson praises writer and director Johnson for the meaty roles he wrote for both Knives Out films and for making the on-set experience enjoyable. “Rian’s just such a great writer, and all of these characters are so rich and have their moments in this movie,” she says. “If any actor ever gets a chance to work with him, they’re lucky.” 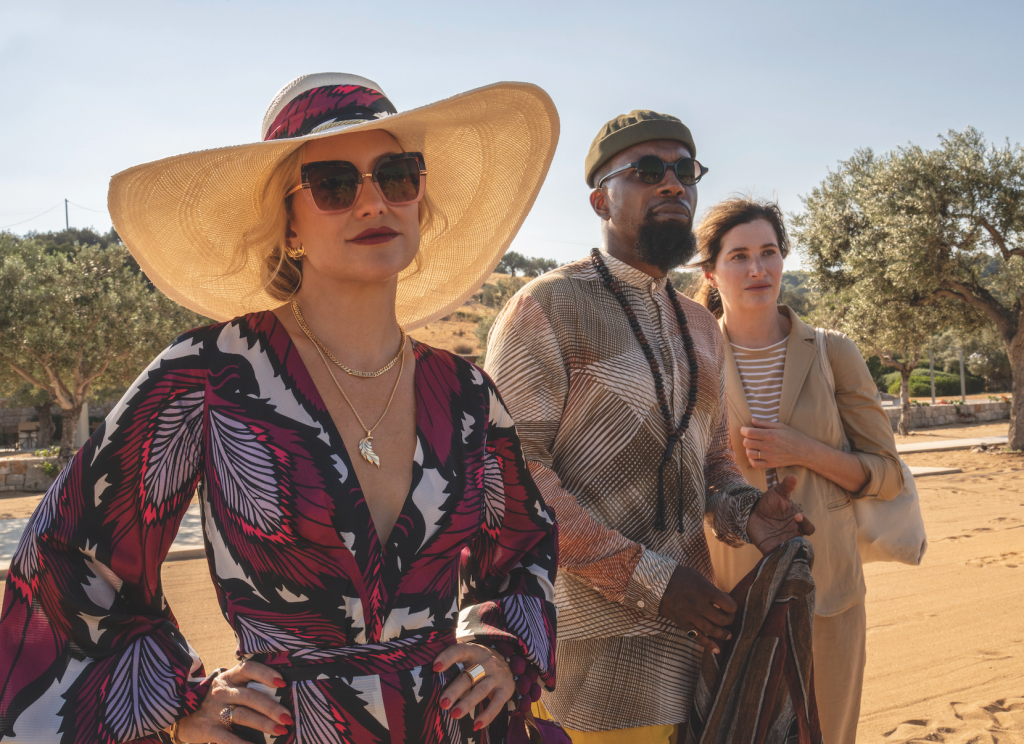 “At the end of the day, I think it’s all about doing the best work you can. You’re gonna win some and you’re gonna lose some, but you just keep going. That’s what any performer should do. ”

The star-studded ensemble cast also includes Janelle Monáe, Kathryn Hahn, Leslie Odom Jr., Jessica Henwick, Madelyn Cline and Dave Bautista. Hudson describes the cast as “loving, generous and playful.” Since the movie was filmed during the pandemic, the actors were in a bubble and hung out mostly with each other. “I just felt really lucky that this was the group because we were all so connected,” says Hudson. “It doesn’t always end up like that [when you make a film], so it was so nice.”

Clearly, Hudson speaks from experience. She made her film debut in 1998 with Desert Blue and rose to fame when she earned an Oscar nod and a Golden Globe Award for her role as Penny Lane in 2000’s Almost Famous. She went on to become a romcom icon, starring in flicks like Bride Wars, Raising Helen and How to Lose a Guy in 10 Days. Hudson candidly shares that she has no regrets about her choices, whether or not they were box office hits. “It’s really hard to make a movie,” she says. “When you’re able to have a career and make a living doing it, it’s such a blessing, and I have so much gratitude. At the end of the day, I think it’s all about doing the best work you can. You’re gonna win some and you’re gonna lose some, but you just keep going. That’s what any performer should do.”

Hudson is just as confident as she is personable—qualities that stem from regular introspection. “I feel like I need to connect with myself to know where I’m at,” she says. “[I need to know] not only what is going on inside of me but also where I’m holding all those [feelings]. Am I feeling tension in my shoulders or my tummy? To me, [recognizing] these things can calm my body down and allow me to refocus on the things I need to be doing to ensure that I feel some sense of balance.”

Hudson certainly has managed to successfully balance a lot in her life. She currently has several projects on the go, including a record that’s coming out next year. “I’m really excited to finally put some music out into the world,” she says. “I would regret it if I never did that.” She’s also pursuing directing, something she has talked about in the past. “I got into this industry because I want to do a lot of things,” she says. “I want to make art, I want to make people feel good and I want to take people on thrilling rides.”