Everything That Happened at the 2019 Oscars

Here's what went down during Hollywood's biggest night. 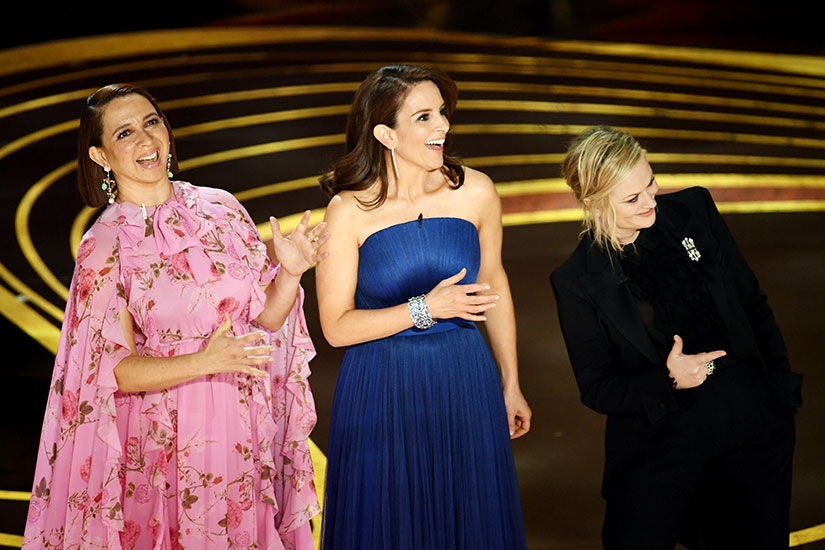 After a rapturous opening performance by Queen and Adam Lambert, Maya Rudolph, Amy Poehler and Tina Fey kicked off the hostless ceremony with a hilarious mini-monologue of their own. While the trio (who we wish were running the show) kept reminding us they were not, in fact, hosting the 91st Academy Awards, they did give us a preview of what some of their jokes would have been had they been emcees for the night—including Maya screeching “Shallow.” Watch it and imagine what could have been—it’s what we’ll be doing.

A Night of Firsts

It was a historic night at the 2019 Oscars. Regina King picked up her first Oscar for Best Supporting Actress in If Beale Street Could Talk (and gave a beautiful speech while doing so). Not only did Netflix’s Roma win Best Foreign-Language Film, director Alfonso Cuarón also picked up a trophy for cinematography, making him the first to win in the category for a film he also directed. Black Panther costume designer Ruth E. Carter and production designer Hannah Beachler also became the first black women to win in their respective categories (Beachler was also the first African-American woman to ever be nominated in the category). One of the night’s most major firsts: legendary filmmaker Spike Lee finally won his very first Academy Award for Best Adapted Screenplay for BlacKkKlansman.

And, okay, this one technically isn’t a first, but it’s still noteworthy: with his Best Supporting Actor win for Green Book, Mahershala Ali (who previously won for Moonlight) became only the second black man to win more than one acting Oscar (the first being Denzel Washington).

Presenters of the Night

Melissa McCarthy and Brian Tyree Henry may have presented the award for Best Costume Design (decked out in outfits paying homage to The Favourite) fairly early on in the show, but we knew they’d be hard to top. Try to get through their banter without laughing, we dare you. (Runner up goes to Awkwafina and John Mulaney’s very anxious rambling.)

At the end of the night Rami Malek won Best Actor for his turn as Freddie Mercury in Bohemian Rhapsody, Olivia Colman took home Best Actress for her role in The Favourite, Alfonso Cuarón won Best Director for his semi-autobiographical film Roma and comedy-drama Green Book won Best Picture.