Everything Phoebe Waller-Bridge Has Said About 'Fleabag' Season 3

We're still not over it. 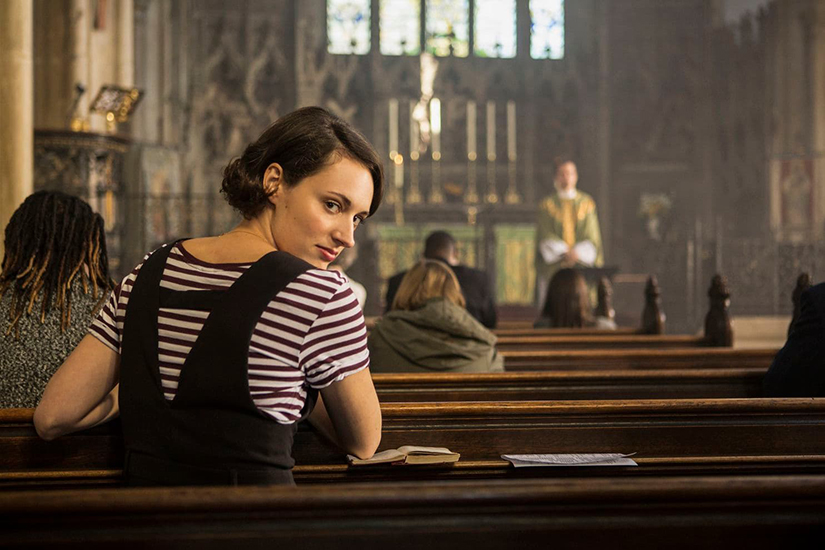 Spoilers ahead for Fleabag.

In the final moments of Fleabag‘s second season, the titular heroine (played by the show’s creator Phoebe Waller-Bridge) tells The (Hot) Priest—”I love you.” He heartbreakingly assures her, “It’ll pass.” Minutes later, the screen on season 2 of the critically acclaimed series cuts to black.

However, the world’s fervor for a third season has not yet passed.

And like her lust for the forbidden Priest (Andrew Scott), the fact that another season has been publicly refuted by Waller-Bridge only strengthens the desire for it.

What began as a 2013 one-woman play is now nominated for 11 Emmys come September 22. But unlike the show’s competitors, Fleabag has no definitive end like Veep, nor renewal for another season via Barry. Here’s everything Waller-Bridge has had to say about Fleabag season 3.

What is Phoebe Waller-Bridge’s current stance on Season 3?

The face of Fleabag has not made any promises that a third season will be happening. In fact, she’s discouraged fans from getting their hopes up about a return. When asked by the BBC about season 3, she declared, “I have thought about it and there isn’t going to be one. This is it – this is the final curtain.” She added, “And yes, I did say that last time.”

The performer has stuck to her word—for now. Recently, she told The Hollywood Reporter, “I feel like it’s done, but I do have a fantasy of bringing her back when I’m, like, 45 or 50. She went on the biggest journey over the past two seasons, and she started as someone who sort of hated herself and ended up as someone believing that she could love again and forgive herself. I have to respect that arc and let her go and live for a bit.”

In the same interview, Waller-Bridge disclosed that “the reasons to end never felt as guttural as they do now,” adding, “I’m a big follower of the old gut.”

Where did Season 2 end?

There’s good news and there’s bad news. Season 2 of Fleabag ended in such a heart wrenching, beautiful way that it could serve as a worthy ending while simultaneously making us ache for another installment.

Fleabag‘s finale saw her evil Godmother, deliciously played by Olivia Colman, marry her father (Bill Paterson) in an outdoor ceremony officiated by the Priest, no less. Fleabag’s relationship with her sister Claire (Sian Clifford) has mended, as Claire’s marriage to Martin (Brett Gelman) ends. So the workaholic sister is free to race to the airport rom-com style for her true love, also named Klare (Christian Hillborg).

Fleabag and The Priest head to the bus stop as they assess where their impossible relationship can go. In the end, he chooses his faith over Fleabag. And, using only her eyes, she mournfully asks the camera to remain behind as she walks out of frame.

Waller-Bridge said the genesis for season 2 began with the idea that someone would notice Fleabag’s direct address to camera; a quirk previously shared only with the audience. “I knew that she was going to meet somebody,” Waller-Bridge told Deadline of Scott’s Priest. “I knew that that person was going to go, ‘Whoa. What was that? Where did you just go?’ And when that idea came up, I went, ‘Oh, shit.’ It was one of those rare feelings. It surprised me when I thought of it. Then it was like, ‘When this happens, it’s going to be huge for her.’ Knowing that he did that became central to his whole existence in the show, really.” (And inspired a lot of Hot Priest™ thirst on Twitter.)

Would Amazon/other cast members still be into it?

Basically, yes. In April, Clifford confirmed to the BBC that “there will not be a third series.” However, she said, “I’m desperate to play Claire again.” But the actress told ELLE U.K. that she was happy with the ending. “I think it was complete and it was perfect,” she said. “I know it’s a contentious issue but I think it’s so hopeful, that ending, because she finally opened herself up to love and being vulnerable which I think is our most powerful asset.”

Clifford’s onscreen husband said he’d also return, telling Vanity Fair, “The thing is that Phoebe is the Daniel Day-Lewis and Jay-Z of show-runners, announcing the end of things. Then she comes back and people go crazy.”

Most importantly, the brass at Fleabag’s U.S. home of Amazon Prime would welcome season 3. “Nothing would make us happier than to have her bring another season of that show, or anything else she wants to do,” said head of Amazon Studios Jennifer Salke, per The Hollywood Reporter. She jokingly added, “I just am, like, basically [Phoebe’s] stalker. Anything Phoebe wants to do, we are signed up to do.”

What else has Waller-Bridge got coming up?

The visionary behind Fleabag would be forgiven for pivoting away to work on other projects. In fact, until September 14 she’s performing a stage version of the character on the West End. The rest of her resume assures her dance card will be full for a while.

Waller-Bridge also created and serves as executive producer for the BBC series Killing Eve, which isnominated for 9 Emmys and renewed for a third season. It was recently announced that she’ll be hosting the October 5 episode of Saturday Night Live alongside musical guest Taylor Swift.

Ever since I saw Fleabag, I’ve been all ‘I can’t wait to see this woman host @nbcsnl’ and it’s happening now + I get to be there too = I am in shambles. ?? Oct 5th ?? pic.twitter.com/VcZeuXWKuc

The 34-year-old also worked on the script for the upcoming James Bond movie, No Time to Die, and is co-writing and co-starring in the HBO rom-com series Run. Oh, and she’s teased a future film and a Fleabag book will be released this fall. So the logistics of season 3 aren’t necessarily there.

Has Waller-Bridge changed her mind before?

If history is bound to repeat itself than a season 3 may be more likely. The TV adaptation of Waller-Bridge’s stage play was supposed to be a one-off installment itself. During a Television Critics Association panel, per The Hollywood Reporter, the creator said, “I decided not to do a second season and I had real pride in my artistic integrity.”

However, an idea for season 2 did arrive and Waller-Bridge said during the panel, “I may be surprised again,” when it comes to a third iteration. In an August Hollywood Reporter profile, Waller-Bridge, once again, pondered revisiting the character “when I’m 50, maybe, when you know there’s been a life lived and it’s a different face looking down the barrel.”

Fans may even remember the creator’s cheeky initial announcement of a second season: “I asked myself if Fleabag has more to say and frankly she hasn’t shut up since. Series two will be a whole new adventure and I’m beyond thrilled to be coming back.” The same could certainly be said for a third season.