The film premiered at the Toronto International Film Festival. 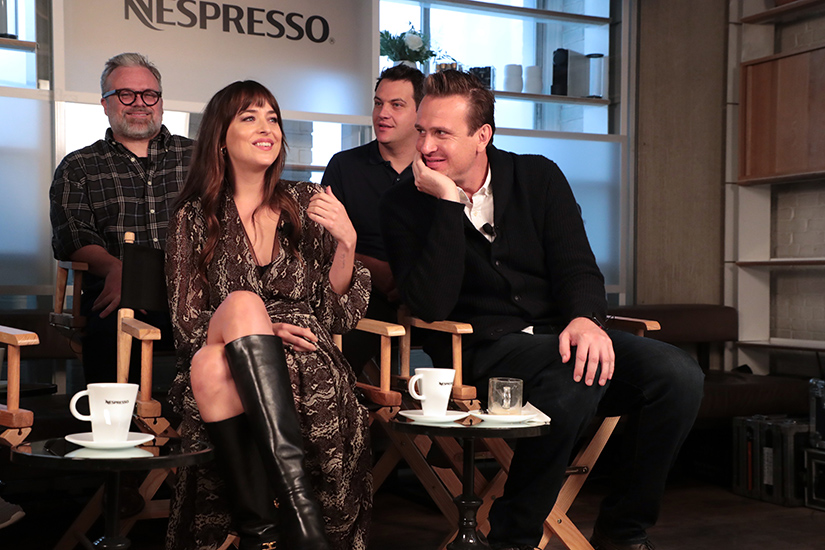 This weekend, Dakota Johnson and Jason Segel attended a Coffee with Creators panel hosted by Nespresso, a longtime supporter of film festivals worldwide, to discuss The Friend, premiering at the Toronto International Film Festival.

Based on a true story, which was originally told in an Esquire article written by Matthew Teague, The Friend follows what happens between couple Matthew (Casey Affleck) and Nicole (played by Johnson), when Nicole is diagnosed with terminal cancer and their friend Dane (played by Segel) moves in to help out with their young daughters.

Read what Johnson and Segel had to say about the film, below.

Dakota Johnson on preparing for the role:

“I did a fair amount of research into what kind of behavioural changes happen and the side effects of different cancer medications, and I mean, gosh, it’s so complicated to explain someone’s reaction to their own body dying. And being totally and completely out of control of that, and still trying to be as stoic and strong as possible for everybody else. So that was kind of my angle, that was what I connected to.”

Jason Segel on building relationships with his castmates:

I hadn’t met Casey [Affleck] until this movie, and I really loved working with him. We’re also shooting this in a very small, two-street kind of town, so there wasn’t much really in the way of distraction. It was a very intimate experience. It was a capsule, you were there to make that movie and to form those relationships and to service the story. So it was actually pretty easy to make those friendships.”

Dakota Johnson on dealing with heavy subject matter in a role:

“It’s kind of different every film, depending on the subject matter. For this one, I was living in this little apartment above a barn on someone’s property on Alabama, so I’d just go on walks. There were so many horses around and I really love horses – I grew up riding – so that was really very grounding for me. I also just felt really grateful at the end of every day. And we had each other to lighten things up and to grip onto.”

Jason Segel on how acting is (literally) child’s play:

“There’s a funny thing about acting with children. As a grownup actor, you do all of these mental gymnastics just to feel ready between action and cut. But when you’re around children who haven’t lost their sense of play… They’re joking around and then Gab [director Gabriela Cowperthwaite] says ‘action!’ and the tears are pouring down their faces. It’s a real reminder that, even when it’s a heavy subject, this is a state of play to some extent. Like you’re doing something as absurd as you’re pretending to be another human being. Having those kids around was very good for perspective.”