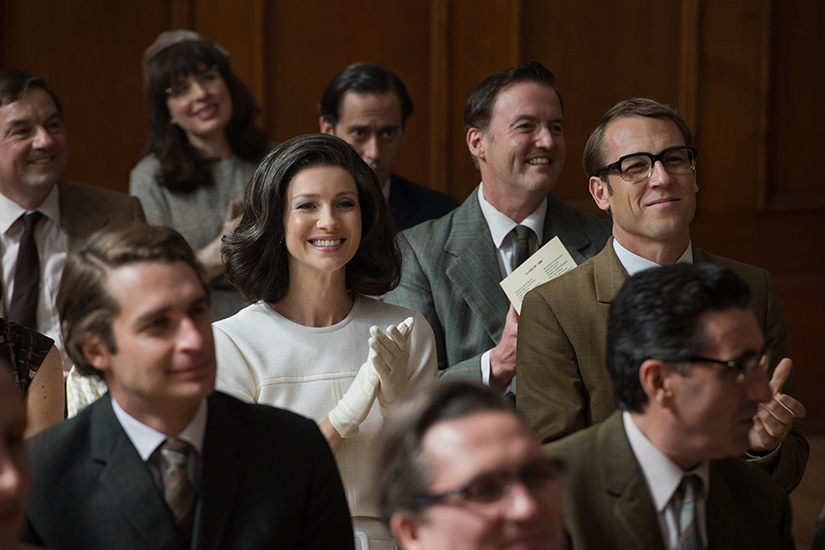 On the day we met up with Caitriona Balfe, it was two days after the much-awaited breaking of the #droughtlander, a.k.a. the premiere of the highly anticipated historic-y science-fiction-y mega hit Outlander’s third season.

Backlit by a dazzling September sky and an enviable view of Lake Ontario, the 37 year old was sunny and smiley—and not say, haggard and sleep-deprived like the show’s legions of fans, who’d likely spent the past 48 hours re-watching the first episode for clues on what the season would hold…and when we’d finally see Jamie and Claire together again. (Catch-up for the uninitiated: Claire, who travelled through time accidentally, fell in love with a hot 18th century Scot named Jamie, also accidentally, has had to travel back to her present time—and her actual husband—while pregnant with Jamie’s child. The end of season two ended with a flash forward where we meet Claire about twenty years later.)

Listen in as Balfe answer ALL the questions in her lovely (and unexpected, given her posh British accent as Claire) Irish lilt.

So, Season 3! Did you really think, in your heart of hearts, back when you were auditioning for this role that you would get multiple seasons?

Do you know what? I didn’t even know to think that! I had never done a TV series before. I remember very early on, my lawyer, right as we were sort of talking about the contracts, being like, “You know this is shooting in Scotland, and you know the first season will be a year”, and I was like, “Oh, I didn’t know that it was going to be a year”, but I was like, “Yeah, Scotland’s great”, and I think he was kind of like, “You might be living there.” Even if I had known, I would’ve been just as excited about it. It sort of defied expectations, but I also really didn’t have any, and went into it blind. Ignorance is bliss maybe.

You’ll obviously go on to do many more great things, but Claire Fraser is rapidly becoming a major line in your biography….

I’m going to be Claire Fraser forever! We’ve been so lucky with the way that this show has gone, and she’s such an amazing character to play… these are all only positive things. I was a struggling actor before this for a good few years in L.A., and I think the memory of that is always pretty close. You are just always really grateful for the fact that, not only are you doing a job that you love, but that it connects with people year after year, and that’s pretty amazing you know.

During those struggling actor days, were you ever close to throwing in the towel and trying something else?

Of course. Right before I had got this job, it was probably six or eight months since I had done my last job. When you first got to L.A., and you’re running around doing castings, you’re in this bubble of delusion where you’re like, “It’s gonna work, it’s just gonna work somehow”. But like with anything, after one year, two years, three years, that resolve gets chipped away at, and acting was my plan A, that became my plan B, and I didn’t have a plan C. There were moments where I was like, “I don’t know what I’m gonna do if this doesn’t happen”.

Much is being made about the great leap forward in Claire’s age—in some scenes, you’ll be a 37 year old playing someone in her 50’s.

It’s an interesting challenge to play somebody over two decades. The big challenge with Tobias [Menzies, who plays her 21st century husband] and I was to construct something that felt very full and real, in these short little scenes we got. People get so caught up in the aging, rather than the idea that this is somebody’s accumulation of experiences. She’s wiser, she’s lived a lot more, and that’s what you have to look at as an actor. Also, she’s only 50! Like, let’s take a look at a bunch of actresses…maybe that’s a bad description because half of them are probably Botoxed to their eyeballs, but you know, look around at people that are 50, and it’s not that old! It was not scary for me.

Balfe and Tobias Menzie as Claire Fraser and Frank Randall.

I think it’s because as women, we’re taught to be so terrified of getting older.

We’re all susceptible to it. I obviously started the show four years ago, and Sam and I were actually looking back at season one, and we were like, “We looked so young!” You get caught up in that, and it’s so annoying because it should be a thing that we celebrate, and embrace our wisdom and experiences. Of course, there are days where you feel more ready to embrace it than others, but I try and force myself to not get sucked into the neurosis about it. But as I said, some days are more successful than others.

You’ve been working on this show for four years, with the same people. What’s that like?

In my previous career [as a model], I probably only worked for people for a few days at a time. You get used to presenting a certain side of yourself, and you can construct this, “This is who I am in front of people” personality. But  when you end up working 14 hours a day with the same people for 10 months a year, you get to know each other in all moods, and all ways, and it’s actually really beautiful because you build these strong bonds that are really true. Some days, somebody is going to annoy you and you might snap at each other, and two days later you’re consoling somebody about something else. I’ve made friendships that I know are going to be life lasting.

Now that you’ve known your co-stars for four years, do you feel like your first impressions of them were accurate?

I met Sam [Heughan] at our chemistry test and he was kind of this really sweet, slightly goofy, non-ego actor. That’s sometimes rare, especially in L.A., to bump into, and I remember thinking, “Oh my God, he seems so sweet”. I was totally intimidated by Tobias because he was very serious, very “actor-y”, and now I know him to be completely goofy and quite ridiculous. Graham McTavish [who plays a Scottish clan leader], on screen he’s so rough and really quite menacing, and in real life he’s so posh. We call him “Dame McTavish”, because he’s like, “Where’s my latte?” It’s not just that people are super talented who work on the show, but they’re all just really lovely, normal people, and I think that’s why we’ve also been able to create this really good bond between everybody.