Brunch with Jessica Chastain (and friends) 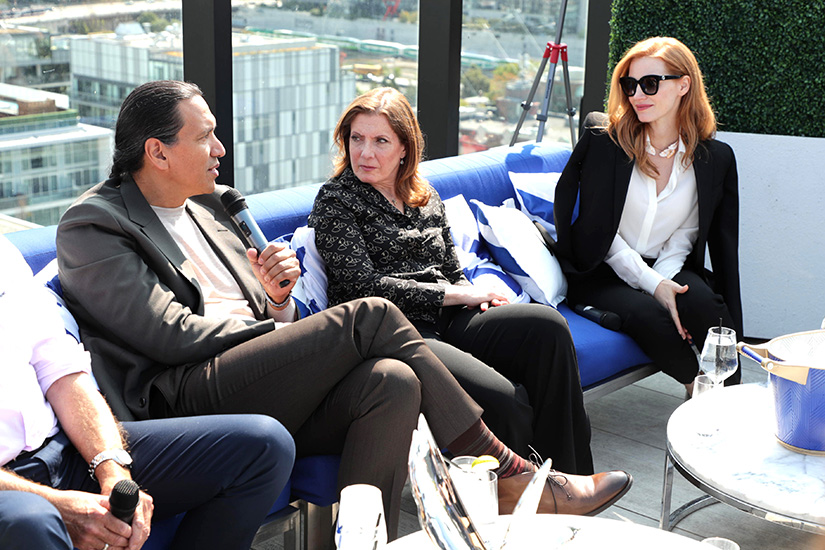 There are worse ways to spend a Sunday morning than high up on a rooftop, sipping a cocktail while you gaze out on the Toronto skyline, the sky vivid in that special September blue. That you’re listening in on one of Hollywood’s biggest stars talking to her co-stars about a movie they’re all clearly very passionate about? It seems like a gift from the TIFF gods.

Part of an intimate group of journalists, we were hosted by Grey Goose (who have a long association with the Toronto Film Festival, and support for all things cinema and chic in general) as Jessica Chastain, black jacket slung elegantly over one shoulder, conversed with her Woman Walks Ahead collaborators about the film, premiering that night at the festival.

Before we get to the highlights of the chat, we must shout out a couple uninvited guests: A crew of cinephile bees, who buzzed both audience and celebrities alike without favour. One hopes they at least buy a ticket to the film when it’s in theatres…

Woman Walks Ahead tells the true story of a woman named Catherine Weldon, who until now, has been an obscure historical footnote who’s only known as someone who journeyed alone across 19th century American to paint the famous chief Sitting Bull’s portrait. Here are some of the juiciest bits of a very entertaining, rather enlightening Q and A:

Jessica Chastain on why she took the role of Weldon:

“It was Steve’s writing. When I read the script, I was blown away. I was also really excited about the character of Sitting Bull, because we meet him as human with wants and desires. The film is a very unconventional love story, a complicated love story, between two oppressed people who find hope through their connection. That’s an important thing to put out in the world right now.”

Michael Greyes on taking on the role of Sitting Bull:

“My concern as an actor is finding something I can connect with in a character, some shared humanity. I’ve been in the industry 25 years, and so often our community is used as a foil against which other larger, more important narrative are played. We’re often a dichotomous “thing” against which mainstream culture examines itself. This movie avoids that completely because Sitting Bull is three dimensional. Often with a character you get to play an octave, but this role asked me to play with all 88 keys.”

Director Susanna White on what she learned about the indigenous community researching this film:

“The big overarching thing for me in this movie is the people’s relationship with the land and their spirituality, that the land is there before any of us, and will be there after we’ve passed through it. None of us can truly own it.”

“Right now, it’s a difficult time to find hope, but I live my life knowing that what you put out into the world is contagious. I try not to go down the rabbit hole of fear and destruction. Sometime I lock myself in my bedroom with my phone and read the news, and I just want to disappear. But for the most part, I want to focus on the positive things that are happening in the world. This movie is a perfect example of people coming together through compassion and empathy to do the right thing. I saw that at the Women’s March in DC. It was intersectional feminism, people from all demographics taking a non-violent stand against hate. That was probably my very favourite day of my life.”