The sci-fi comedy satire starts streaming on Amazon Prime Video on May 1. 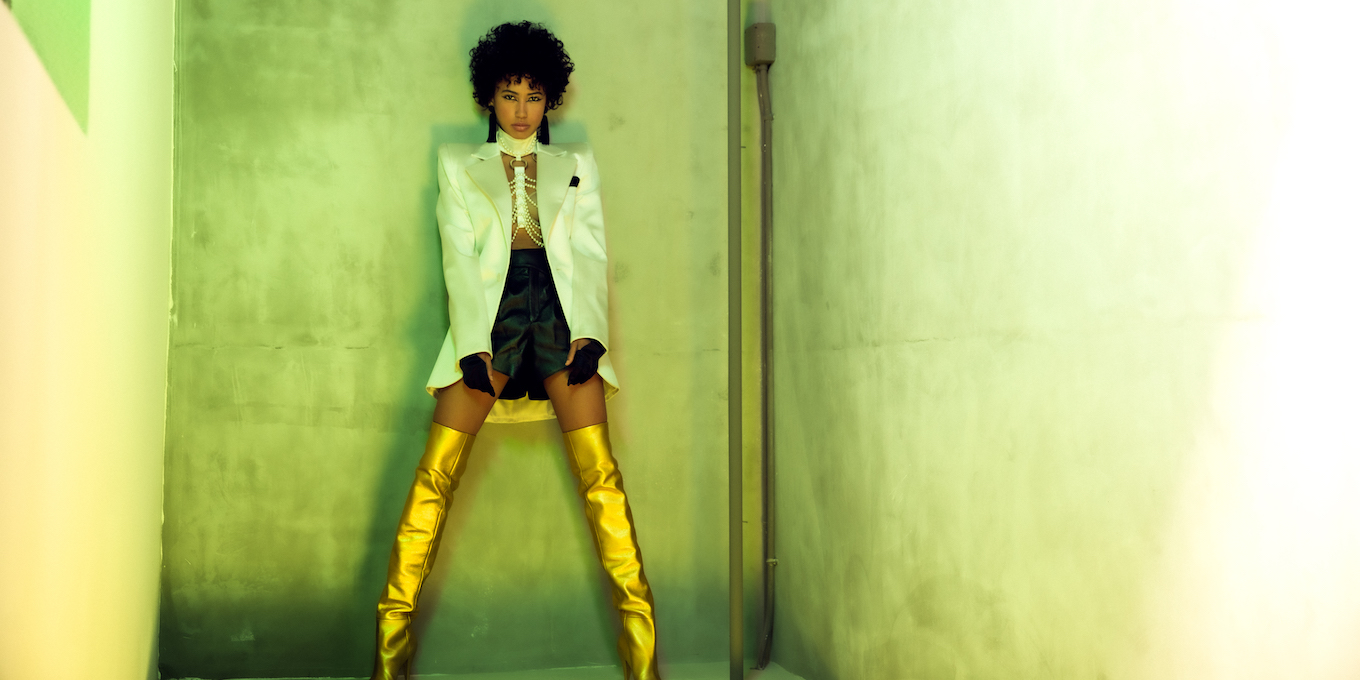 Andy Allo is far from the only person trying to stick to a schedule while self-isolating, in an attempt to maintain some sense of normalcy. But she is the first person I’ve spoken to who has remained committed to waking up at…6 a.m. “I get up and journal, meditate and then I work out,” the 31-year-old actress says, laughing, when I can’t help but express my shock over how much she gets done before I’ve even woken up. “You know, there are good days and not-so-good days. A friend of mine [helped me realize] that on the bad days, you’re grieving that [missing] connection or the way things used to be. And that’s okay. But it’s been nice to really think about the things I normally wouldn’t have time for.”

And, okay, Allo is mostly talking about her creative endeavours, but she admits she’s been watching more TV than usual, which is fitting, given that her new binge-worthy series, Upload, is about to drop on Amazon Prime Video on May 1. The sci-fi comedy satire (which, btw, was created by The Office‘s Greg Daniels) is set in a future where humans can upload their consciousness into the afterlife. Allo – who you’ll know from roles in Pitch Perfect 3, Chicago Fire and as a musician who has toured with Prince – stars as Nora, a woman who helps uploaded people adjust to their new version of life. We hopped on the phone with the Cameroon-born, L.A.-based actress to talk about the show, filming in Vancouver and working with Prince.

Why did you want to be a part of Upload?

First of all, Greg Daniels. Legend. Genius. That alone I was like, “I’m in.” What’s great about Greg is that he really knows how to craft characters and relationships. Look at Jim and Pam [on The Office]. He gives you so much to work with, you kind of just have to get out of the way and let the material shine. From day one, he created an environment that was supportive and made me feel empowered. I felt like I had a voice [on set].

And what was it about Nora that appealed to you?

I really related to her, which is kind of scary. She really loves her dad and cares about him so much, which struck a chord with me. She desperately wants him to upload so she doesn’t lose him. As my parents get older, I can totally relate to that. I want to be able to talk to them forever. Nora is such a layered character. Oddly she fit just like a glove. I truly believe that there are roles that are meant to be yours, but I hadn’t quite experienced something that felt this right. It felt so natural to put her on.

When you said it was scary how much you relate to Nora, how did you mean?

I learned so much from her because she grows so much in the series. A big lesson for Nora is that you need to also take care of yourself and learn to not fix people and, instead, just accept them for who they are. And that’s been a big lesson for me in the past. You have to let go and allow people to grow in their own time.

How has living in self-isolation changed the way you think about Upload?

It’s so wild how many similarities there are between the show and our [current] reality. Nora only communicates with her clients through technology, which is how we’re able to connect with our friends and families now. I talked to Greg about this and we were laughing because a lot of the show is coming true even though it’s set in 2033 and I said to him, “Greg, man, you’ve got to be more careful about what you write.” Like, we have scenes where everyone is wearing masks, but we’ve been working on this for two years. And Greg has been working with the idea even longer.

You’re also a musician and have toured with Prince. What did you take away from that experience?

Working with him trained me to work well under pressure at a very high level. I don’t think I could have shown up to set, working with another legend like Greg, and felt like I was ready to take the series on. Upload is my first leading role, and I had to be able to show up, be a leader on set and not crumble under the pressure. Working with Prince trained me for that.

Right, it’s like once you do something for Prince, you can take on the world.

Yeah. He was no joke. There was such a standard of artistry and professionalism, and also integrity with what you did. That’s something I try to bring into everything I do.

I love Vancouver. I would live there. I did not want to leave. It was so beautiful, the perfect blend of city and nature. I had heard Canadians are the nicest people, and it’s true. Everyone on the crew was such a joy to be around. And I couldn’t have asked for a better partner in crime than Robbie [Amell, her co-star], who is from Toronto. He’s such a kind and generous person. We hit it off instantly and I think you can tell when you watch the show.

Exclusive: Watch a Clip of the Audition Tape That Landed Maitreyi Ramakrishnan Her Starring Role in Never Have I Ever