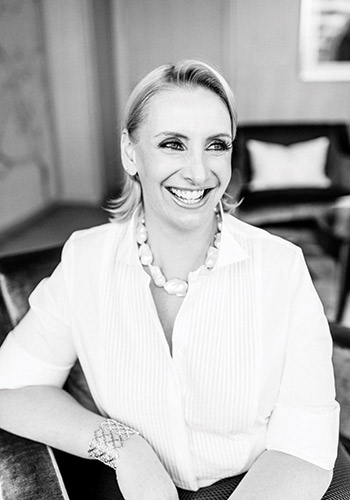 A princess. That’s how Kathi Andri says she felt when she arrived at the Royal Suite at the Four Seasons Toronto after spending the previous day being pampered at the hotel’s spa and then enjoying a dinner with her husband. Eventually he was dispatched home to tend to their kids so Andri could spend a rare night alone soaking in the tub and watching movies. “This morning, I had breakfast in bed and read a newspaper!” she said, laughing. “I can’t remember the last time I did that.” As a nurse and mother of three, Andri doesn’t exactly have a lot of free time. Indeed, time – in the metaphorical sense – is especially precious to her.

Four years ago, at the age of 36, she was diagnosed with invasive carcinoma in her breast. From the moment she found the lump, her world changed. After the diagnosis, she opted for a bilateral mastectomy and six rounds of chemo. “I never thought I’d pick myself up from this nightmare,” she recalled. “I never thought I’d feel joy or happiness. Then I went to Wellspring [a Canadian cancer support foundation]. I remember I was crying and this volunteer said to me: ‘This isn’t the end of you. Look at me; I’m a 25-year survivor. You might think your life is done, but you can do it.’ Wellspring was my soft spot to land. They gave me hope. Nobody gets it, but they do.”

A year after her treatments, Andri had reconstructive surgery, which she says helped her regain her self-esteem. But more than accepting the changes to her body, Andri says her biggest hurdle was emotional. “We don’t know what our future holds,” she explained. “The hardest part for me was this loss of innocence. We all think, when we’re in our 30s and 40s, that we are in the prime of our lives and that we’ll have a full life and be a grandmother. A diagnosis like this changes that. But you learn to live your life with joy. I’ve done everything I can to stop the cancer from coming back. Now I want to show people that there is light at the end of the tunnel.”

Kathi Andri was shot on location at the Four Seasons Toronto. Normally a jeans-and-a-t-shirt gal, she says that wearing looks from Pink Tartan  inspired her to go shopping!