How to pull off an epic but elegant outdoor bash

Warning: Your guests may never leave. 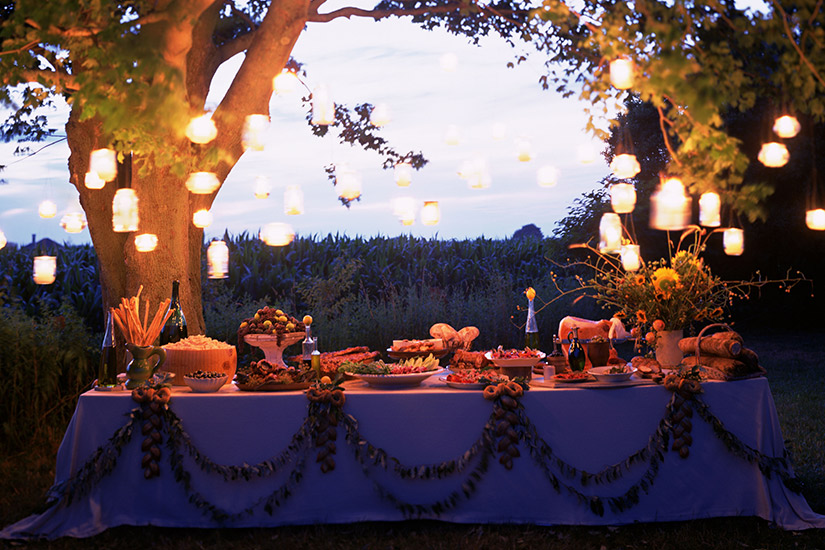 ON YOUR CONDO ROOFTOP

THE VIBE Unless you live in the penthouse, simplicity is key to pulling together a rooftop bash—you don’t want to be running to and from your apartment for snacks and supplies. Grilling is your best bet if you want to serve a meal, or start your party after dinner if cooking isn’t your thing. Hors d’oeuvres, like crudités and dip in shot glasses or mini anything, always do well, and you must proffer something sweet to the party gods. Event planner Brittany Wong of Bash + Fete in Vancouver says you can’t go wrong with pavlova. (Step 1. Buy pre-made meringue nests. Step 2. Add fruit and whipped cream. Step 3. Accept that you are the second coming of Julia Child.)

THE ESSENTIALS Elevate the look of the party by using your regular tableware outdoors, says Toronto-based party planner Jaclyn Genovese. (Plastic is a big no-no; you should have retired those red party cups the same year you stopped playing beer pong.) If you don’t have a complete set, rent plates or hit up your local thrift store for mix-and-match cutlery. Be sure to have a backup location — like your party room or a nearby bar — in case it rains, because nothing will break up a night faster than trying to squeeze 40 people into your studio apartment.

IN THE BACKYARD OF YOUR NEW HOUSE

THE VIBE Even though living in a proper house makes you feel grown-up (thanks, crippling mortgage payments!), avoid being tempted to hold a formal meal – that’s best for a winter dinner party or your upcoming wedding to Jake Gyllenhaal. Instead, lay out throws and pillows picnic-style, strewing candles and lanterns around them. Clustering chairs in groups will also encourage intimate convos, like with the hot guy from the coffee shop, although you should also set up a few small tables so people can put down their drinks. (There’s nothing worse than holding a plate with food and trying to eat while clutching a wineglass.)

THE ESSENTIALS Set up two bars – one at the party’s entrance and one in the middle of the action – so guests can mingle. Instead of a signature drink, make signature grapefruit ice pops. (Mix six ounces of grapefruit juice, four ounces of coconut water and two tablespoons of torn fresh mint leaves and freeze.) Bonus: Throw one into a glass of Sauvignon Blanc. Another good idea: Invite your neighbours. They’ll be too busy having fun to complain when the party goes on ‘til 3 a.m.

AT YOUR BALLING MUSKOKA COTTAGE

THE VIBE We’re assuming budget isn’t an issue here, so live large. Arrange flowers (ask your florist for in-season blooms like dahlias, sunflowers and hydrangeas) and greenery that mimics the surrounding boreal forest around food and beverage stations. And while, yes, the backdrop of Lake Rosseau should be enough for guests, our experts say that activities can take a party to the next level. “Set up a projector and screen and have a mini movie screening, or hire a DJ for a more energetic crowd,” says Genovese. “If you’ve invited some cocktail enthusiasts, organize a beverage station with fresh fruit, herbs and bitters so guests can get creative with their drinks.”

THE ESSENTIALS Mosquitoes are a major buzzkill. Keep bug spray (like Erbaviva Buzz Spray, $27.53, at thedetoxmarket.ca) on hand for guests. And don’t let them leave empty-handed: Celebrity party planner Melissa Andre loves doling out goodie bags with scones and orange juice – a fail-safe hangover antidote – for the morning after.

REMEMBER: A PARTY IS AS GOOD AS ITS PLAYLIST… Keep it mellow to start, and switch to more upbeat tracks once the party is in full swing. You should have at least four hours of music planned.

…AND ITS GUEST LIST “Choose guests who share common interests, but also introduce new friends by mixing different ages and sexes [and people with different] careers and viewpoints,” says Genovese, adding that every guest should know at least one other person and, to keep the energy up, you need to invite two “life of the party” types. “You want people to leave feeling elated and asking when you’ll be holding the next one.”