Classy Edinburgh or cutting edge Glasgow -- Which style are you?

Get set for a high-fashion fling in Scotland. 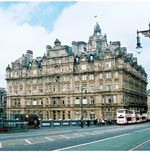 Your guide Edinburgh-based film producer Catherine Aitken started making handbags with local mohair and Harris Tweed as a promotional tool for her production company until the demand for her designs warranted setting up an online boutique, www.catherineaitken.com. “The muted and jewelled colours of the gorgeous textiles emulate the Scottish landscape,” says Aitken. “They make you think of everything from the elegance of country ladies to that glorious Brigadoon notion of Scotland.” Aitken’s film Afterlife won the Standard Life Audience Award at the Edinburgh International Film Festival in 2003.

Big picture Beautiful architecture, lush, colourful gardens, cobblestone streets and Scotland’s most famous castle perched high on a rock overlooking
the country’s capital. In August, the city is packed with jazz, film and book events, not to mention the hugely popular comedy and theatrical Edinburgh Festival Fringe. The Edinburgh International Festival — one of the largest arts gatherings in the world — is also held in August.

The vibe “Edinburgh has a classic feel — a sort of buttoned-up style,” says Aitken. “It’s a rich city, but it’s country rich, not snobbish. Women pay attention to detail. How well a garment is made is more important than whether it’s the latest style. But there’s also a saying about Edinburgh women — that they’re all ‘fur coats and no knickers’!”

What to take Sensible shoes, for traversing the cobblestone streets, and a jacket. “It’s always windy in Edinburgh, even in summer,” says Aitken. “Very rarely can you wander around without a jacket.”

Must-see spots No trip to Edinburgh would be complete without walking the Royal Mile, which winds through the narrow streets of Old Town from the
Palace of Holyroodhouse (the Queen’s crib when she’s in town) to Edinburgh Castle. For shopping, you can’t miss Princes Street and a trip to Jenners, one of the oldest department stores in the U.K. For higher-end digs, head to George Street’s Cruise and Whistles boutiques. For slightly more off-the-beaten-path design, trawl through William Street’s Sam Thomas and Arc Angel, which carry lesser-known labels from all over the world.

Where to stay To fully enjoy Edinburgh’s hospitality, stay at the plush Scotsman hotel. With only 69 rooms and a very attentive staff, you’ll be treated like a queen (of Scots, that is). From the panoramic view of New Town to the rich tartan fabrics — and the unlimited Molton Brown goodies — you’ll find yourself torn between exploring the city and cocooning under your duvet.

Where to eat Edinburgh is a feeding ground for foodies. At Restaurant Martin Wishart — home to one of Edinburgh’s two Michelin-starred chefs — local and traditional ingredients are treated to French flair. Pop in for lunch and try the Scallop Risotto with Cucumber and Lemon Vinaigrette and finish with the Rhubarb and Fromage Frais Parfait with Strawberry Jus.

Where to drink Head to another of the city’s land-marks, the Bar at Palm Court in The Balmoral hotel. With five-star clients like Kylie Minogue and Angelina Jolie roaming around, be sure to pack your favourite Jimmy Choos — if only for posing at the bar. To rest your heels after shopping on George Street, make your way to fashion emporium Harvey Nichols. If you can resist the designer bootie and make your way to the top floor, you’ll be rewarded with stunning views of the city and the perfect place for a mojito break.

What to splurge on Treat yourself to a membership at The Hallion (approximately $800 a year) — a private club sans wood panelling and the blue-haired crowd. With locales in both Edinburgh and Glasgow, you’ll have a place to call home in each city. Sip champagne in its swank bar while you wait for a table to free up. Once seated in the traditonal yet modern dining room, sample dishes like Ravioli of Shetland Salmon, Crab and Spring Onion. Later, check into one of the individually styled rooms — from the all-white Virgin Suite to the super-sexed Bond Suite. In the morning, schedule a pedicure — you’ll need one after walking the Royal Mile.

Photo of the posh Balmoral hotel courtesy of Ryan JenningsGLASGOW

Big picture Music, shopping and nightlife. Greater Glasgow has 2.1 million people and a history rich in design, architecture and the arts. The city is home to Franz Ferdinand and gave Oasis their big break. Remember the name Charles Rennie Macintosh-his work as an architect, designer and artist in the art nouveau and Japanese styles influenced much of the city’s (and Europe’s) design aesthetic at the turn of the last century.

The vibe “Glaswegians are very much into designer clothes — Kate Moss-style,” says Aitken. “There are labels on everything, and you never dress down-high heels and your Prada bag go everywhere. It is much more in your face.” If you like to spend money, you won’t have any problems splashing your cash in the U.K.’s second-best shopping city, after London. “Glasgow is much busier and bigger than Edinburgh. It has a huge amount of energy, and as soon as you’re there you know you’re in a big city — but not in a bad way,” says Aitken.

What to take An umbrella. Glasgow is generally warmer and less windy than Edinburgh, but it gets more rain.

Must-see spots Glasgow is a shopper’s paradise with concentrated, pedestrian-only streets like Buchanan and Sauchiehall, and areas like the high-brow Merchant City and the Italian Centre. Everything’s so close together, you can hop from the Miss Sixty boutique to the ELLE shop (that’s right!) to Lacoste and Furla in Princes Square. If you like to see all your designers in one spot, stop in at Frasers, where you can satisfy your Gucci and Pringle itch. After a full day of credit card abuse, indulge in afternoon tea at one of The Willow Tea Rooms. From the architecture to the tables and chairs to the menu — even the waitress uniforms — everything was designed by Charles Rennie Macintosh.

Where to stay If you’re looking for a contemporary spot to lay your head and still be within seconds of Buchanan Street, then Langs is the place for you. Treat yourself to one of the Manhattan-loft-style suites-they feel more like private apartments than cookie-cutter hotel rooms. And with two restaurants, two stylish bars and one of Glasgow’s best spas on-site, it’s the perfect place to come home to after a day of power shopping. (Did I mention how great the shopping is?)
Where to eat Glasgow has a large Indian population, so there are plenty of ethnic restos serving up great curries at reasonable prices, and you don’t have to go far to find one. If you’re looking for something a little more upscale, there’s no beating Gamba. Fantastic service and pared-down decor create the ideal atmosphere to enjoy the best fish in the city. The Japanese- and French-influenced dishes, like Seared Swordfish with Chilli Jam, Rocket and Parmesan, is especially delicious.

Where to drink Stylish bars in converted Victorian buildings are worth a cocktail or two. Try Corinthian, which spans five floors of bars, a restaurant and party spaces in the former Union Bank of Scotland head-quarters. If you’re looking for Celtic culture and some good tunes, head to the pubs that line the pedestrian Ashton Lane in the West End.

What to splurge on A kilt by Howie Nicholsby, the designer who brought us 21st Century Kilts and whose pleats have swirled around Vin Diesel’s and Robbie Williams’ hips. Darts are added to the front apron of women’s kilts to flatter the figure, and the length can go “from the indecent to the floor.” Nicholsby’s designs skip tartan altogether in favour of oriental silks, pin-stripes and PVC. If leather is more your speed, you can expect to pay upwards of $2,000, but everything’s made to order and one-of-a-kind doesn’t come cheap.

Photo of the posh Balmoral hotel courtesy of Ryan Jennings