Zoe Kazan tells about her friendly role in The F Word, which premiered at TIFF last fall. 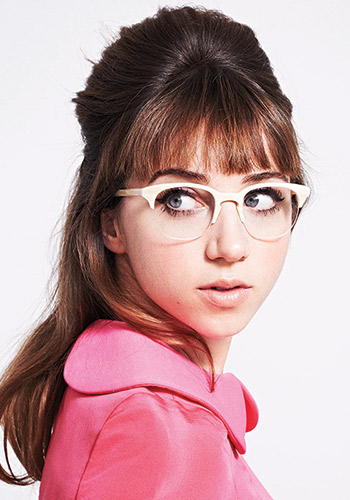 Zoe Kazan isn’t only an actress. The 30-year-old is also an accomplished writer: She penned, and starred in, the charming flick Ruby Sparks. But her talents behind the camera don’t diminish the fact that, in front of it, she is totally adorable. In The F Word, she shines alongside Daniel Radcliffe and Adam Driver. The updated romcom grapples with the most hated of all romantic plights: the friend zone. And at the Toronto International Film Festival, we fell in love with her quirky personality—and her Honor crop top and shorts.

Why this movie?“ I met Dan [Radcliffe] in New York when he was doing Equus on Broadway and I was doing another play. We had a drink, and I thought he was the coolest, funniest, most down-to-earth person.”

Your character in this movie is very authentic. Is that unusual for female roles?  “It is, unfortunately, uncommon. I think that all of the people in this movie feel super-real. In a lot of romantic comedies, the girl is a prize to be won. In this, it’s much more about two people.”

It’s also rare to see a movie without an obvious villain. “In the ’90s, it was always Bridgette Wilson—she was the too-pretty girlfriend of the guy you were supposed to like! There’s no version of that in this movie, which is good.”

Do you bring your writing into the mix when you take on an acting job? “I’m probably more of a snob because of my writing. But, if anything, I’m more cautious about suggesting changes in a script because I don’t want to step on any toes.”

Like when a chef goes to someone’s house for dinner?  “Exactly! I was 25 when the first play I wrote went out. I think back on that and I’m like, ‘What was I doing?’ I don’t even think the play was bad; I just thought: ‘You’re 25. What do you know?’ I was the youngest person in that room, and people would be looking to me for guidance and I’d be like, ‘I don’t know! You’re twice my age!’”

TIFF 2013: The best fashion and beauty looks from the film festival

Do you think your fashion sense has changed?  “I grew up shopping at thrift stores and Gap. When I was younger, I used to wear a lot of crazy shit—like fur hats and overalls. Now, when I think about what I wore in college, I’m, like, so humiliated. As I get a little older, I’m getting more streamlined about what I like.”

Read more:
Role model: How fashion helped a cancer survivor
Stylish partygoers at the 2013 Whistler Film Festival
The 10 Films You Absolutely Must See at TIFF ‘13
ELLE Cocktail: The Buffalo Soldier