The deal with Meghan and Harry's PDA

Royal experts break down the royal rules for us. 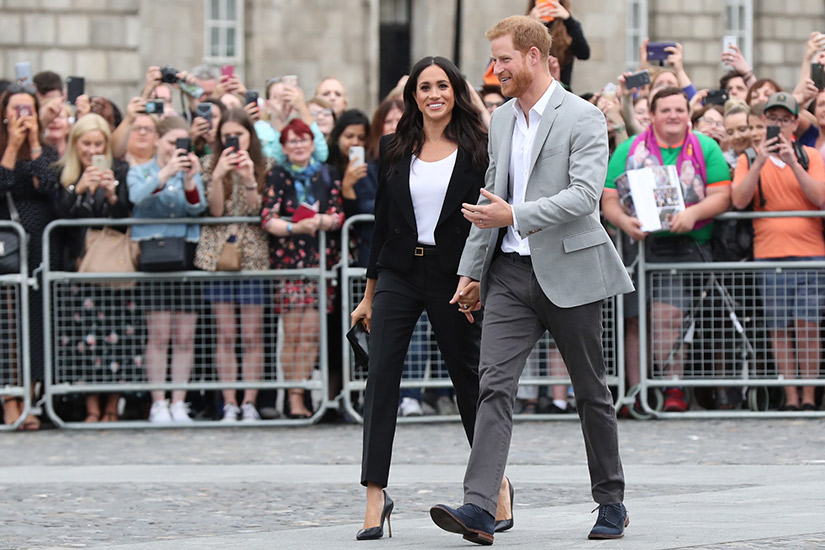 If you’re anything like us, you can’t help but slow clap whenever Prince Harry and Meghan Markle are spotted engaging in even the most minor PDA. Like when they held hands at first public appearance together during the Toronto Invictus Games last year. Or when Meghan slipped her arm through his for the official family portrait at Prince Louis’ christening. But you don’t have to be an obsessive royal watcher to realize that no one else in the royal family seems to be this touchy feely. And with every arm offered or hand placed at the small of her back, we couldn’t help but wonder: are they breaking some sort of royal protocol?

The short answer is no. “There’s no rule saying [a royal] can or can’t do that. If a royal wants to hold the hand of [their partner], I don’t think anyone’s going to say that’s right or wrong,” Grant Harrold—a.k.a. The Royal Butler, who worked alongside the royal family for years, as a butler for Prince Charles, Will and Kate and Prince Harry—explains.

Harrold says it’s simply a matter of their personal preference. When royals are attending official engagements, they need to stay focused on the task at hand, so it’s not surprising that affection can fall to the wayside. As sixth in line to the throne, Harry also faces less pressure than Prince William, who will be king one day. But Harrold, who now teaches etiquette and works as an expert with with his own website under his Royal Butler moniker, also reminds us that Meghan and Harry are still newlyweds. “It’s probably natural for them to be more touchy-feely,” he adds. “But Prince Harry and Meghan Markle, as we’ve seen, have their own way of doing things.” (Think Meghan and Harry walking arm-in-arm into Buckingham Palace for the 100 anniversary celebrations for the Royal Air Force.)

And if you’ve noticed that Will and Harry often walk slightly ahead of Kate and Meghan, you’re not seeing things. Again, there is official rule written down proclaiming that it has to be this way, but there is one key reason (and it’s not sexism): Will and Harry are royals by birth, while Kate and Meghan are part of the family by marriage. It’s the same with Queen Elizabeth and Prince Philip; Philip walks behind Her Majesty. “They are the ones carrying out the engagements and their [spouses] are there to support them,” Harrold says.

So the next time you notice Meghan and Harry showing affection or behaving a little differently than what we’re used to, keep one thing in mind: the younger members of the royal family are starting to change the rules, and they’re leading the way. “It’s difficult for a royal to break protocol, because royals make the rules,” Harrold laughs.