Prince George is "the number one target" for paparazzi 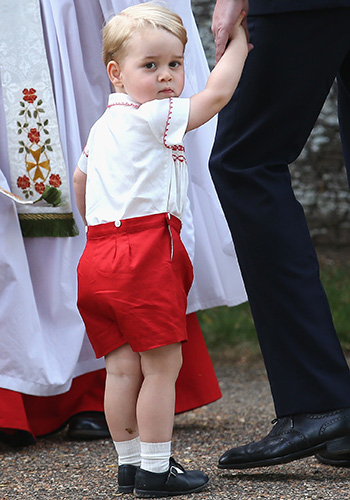 In today’s installment of “that’s just not okay” news, we have word that our prince of frowns, our beloved Cambridge baby himself, is having a spot of bother with overly enthusiastic photographers. And when we say “spot of bother”, we mean that some rogue paparazzi are harassing Prince George…and it’s gotten so bad, the palace has had to release a special letter addressing the issue.

In a letter published Friday, Kensington Palace called out what they call “increasingly dangerous tactics” used by some photographers to get pictures of this admittedly very photogenic little boy. To illustrate, they shared this distressing—but not uncommon—recent incident:

“A photographer rented a car and parked in a discreet location outside a children’s play area.  Already concealed by darkened windows, he took the added step of hanging sheets inside the vehicle and created a hide stocked with food and drinks to get him through a full day of surveillance, waiting in hope to capture images of Prince George. Police discovered him lying down in the boot of the vehicle attempting to shoot photos with a long lens through a small gap in his hide.”

Creepy, no? The letter went on to add that Will and Kate don’t want George and Charlotte to grow up “behind walls”, and while they love sharing photos of their children, they’re just like any other parent who feels majorly weirded out by strangers taking their picture.

The royal toddler with the coolest style (and it’s not George!)