A new album. A new fragrance. A new look. Has Katy Perry reinvented herself? Find out in our celebrity interview. 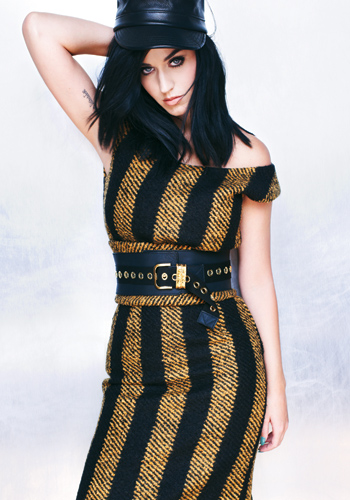 The swirling chaos that surrounds Katy Perry is making me light-headed. I’m standing in a Manhattan mansion, practically being force-fed glitter-filled champagne like a slightly drunk foie-gras duck. Perry, legendary pop star and evident party lover, is swanning around the grand room in a
Thom Browne bustle gown, tapping people with a sceptre and laughing hysterically. She breaks only to eat cake and dance with New York DJs the Dolls, who are spinning ear-shattering ’80s pop.

It’s late, but she is celebrating the launch of her latest
fragrance, Killer Queen—another building block in the empire she has created since hitting the scene in 2008 with the sexy “I Kissed a Girl.” She seems on a high. It’s understandable: This is the biggest fragrance launch. Ever. Her fourth album,
Prism, is only hitting shelves this month, and it’s already a success.

All this glitter is churning in my stomach. When I sit down with Perry in a plush hotel, she is more demure. Her body—as though sketched by a teenage boy—is hugged by a high-collared emerald-green Moschino dress fronted with a regal spray of roses. Despite the
royal-themed dress and fragrance, she’s quick to cast aside any fussy associations. “I’ll be the jester to the princess,” she says with a laugh. “The comedian counterpart!”

But she’s not the confectionery-breasted bubble-gum queen anymore. “It’s a whole new chapter,” someone in Perry’s entourage whispered before I met her. She has grown up and come out the other side of a reportedly messy divorce from comedian Russell Brand. “You held me down but I got up,” say the lyrics of “Roar,” the infectious first single of her new album. “You’re gonna hear me roar.”

Katy Perry talks about her lifestyle evolution on the next page…

Perry laughs when I ask her where she’s at right now. “Right here! On this couch!” she says, kicking her feet out and cackling, before relenting. “I’m 28, and I don’t know how young you are, but, as you must know, when you’re at the end of your 20s, it’s a very important growing time. It’s called the Saturn return, if you like
astrology—I know it’s important for me.” I don’t know much about planetary phases, but I looked it up. In fact, the Saturn return is described as a bracing cosmic wake-up call, when youth’s charms fall away to reveal adulthood’s sobering realities. “I think that it’s a very important time, when you kind of let go of childish things and accept the wisdom that comes with age,” she explains. “That’s exactly where I am now.”

Perry uses words like “cooler” and “sophisticated” to sum up her evolution. It seems important for this self-described control freak to keep pushing forward. “I’ve always been a sponge; I’ve always had a desire to learn,” she explains. “I didn’t grow up with a real education, but now I am kind of educated by life.” In fact, Perry got her GED during her freshman year of high school so she could pursue a music career. She recorded a gospel album inspired by the music she grew up with in her parents’ Pentecostal church. Then she fell in love with acts like Queen and Alanis Morissette.

The kid who wasn’t allowed to listen to “secular” music has certainly broadened her tastes. She smiles when she tells me that she went to see Kinky Boots on Broadway the night before. “I loved it. I was surprised that I was emotional about it. The message is so powerful.” The musical is based on the true story of a shoemaker who teams up with a drag queen to save his family business. It’s fun and glitzy and boasts a score by Cyndi Lauper. At its core, though, the story is about the characters’ search for commonality and struggle to stand up to their parents. No wonder Perry loved it. Her rebellious streak may be why she says she’s so inspired by strong women like Joan of Arc. She puts it more simply, though. “I always like to go the unique road less travelled.”

Sometimes, however, Perry’s evolution seems a little raw around the edges. She talks a lot about luxury’s allure. “One of my favourite places in the whole world is Claridge’s for high tea,” she says. “It’s exquisite and royal.” She plays with her raven hair as she describes the importance of elegance, dropping one stray strand after another on the floor, seemingly without noticing. Then she looks down, surprised, and laughs with a touch of embarrassment. “All these extensions!”

We chat more with Katy Perry on the next page…

It seems that as soon as Perry forgets she’s trying to be poised, she slides back into the charmingly brash girl we fell for years ago—the one your brother would be infatuated with but your mother might not approve of. She chats easily about her interest in her health: She has switched from drinking lattes to green tea, she hikes and she takes supplements. Then, while describing her preferred brand of vitamin C, she casually mentions that the only drawback is that it tastes like “a load and is disgusting.” She smiles, continuing on, and then stops dead and laughs. “I can’t believe I just said that! Strike the ‘load’ part!”

Before long, she has flicked her
pumps onto the floor (“Yeah, I’m taking my shoes off!”) and dumped the contents of her
makeup bag out on the coffee table. “There we go!” she says. “My bag of tricks!” It’s an unusually literal response to an admittedly rote line of questioning about her
beauty regimen. “I make sure to give myself a break,” she says. “I had to find that balance. But I learned this thing called Transcendental Meditation, which I do as much as I possibly can. It’s 20 minutes and you’re supposed to do it twice a day, but I only do it once every other day—but anyway, it works.” She waves her hand dismissively. “People say you should work out 30 minutes a day—none of us works out 30 minutes a day!” She is equally frank about why she admires her famous friends. “I think that Rihanna always looks so fresh and I’m like, ‘How do you do that? We all know how much pot you smoke! And you don’t sleep because you’re on Instagram at four o’clock in the morning!’” she hoots with mock despair and then winks. “I’ll get her secret for you.”

It’s funny to hear her mocking Rihanna’s inability to shut down, since if Perry isn’t tweeting a fan, she’s planning a world tour or collaborating on a scent. When it comes to her expanding commonwealth, she “can never turn it off.”

In fact, when asked if she has a talisman, she just cocks her head. “What’s that?” she asks, listening intently as I explain that it’s just a lucky charm. “I would love a talisman! Hold on, taking a note right now. I love words!” Then, in a flash, she whips out her phone and types herself a reminder. “Be my talisman!” She starts humming. “We’re writing a song right now!”