Here's what we know about Meghan and Harry's wedding

All you need to know about the Royal Wedding 2.0. 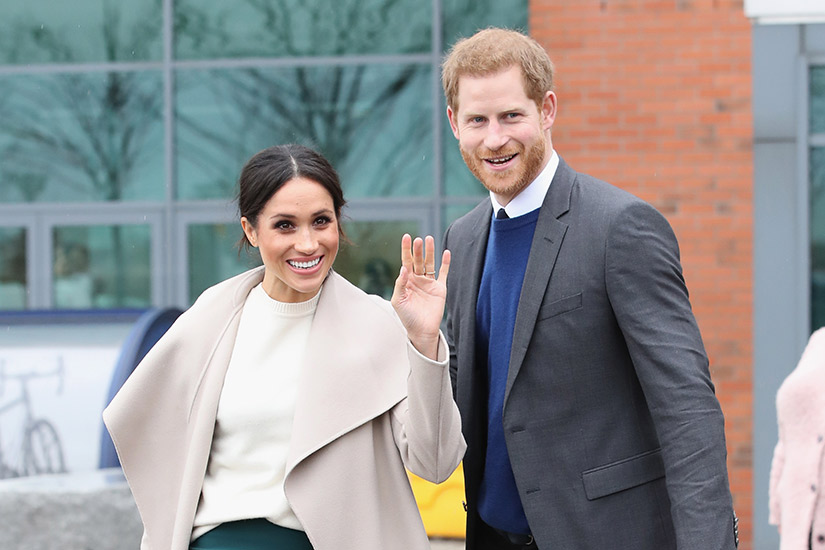 Grab your fascinators: we are less than two months out from Prince Harry and Meghan Markle’s wedding. In case you lost your invitation in the mail (us too), here’s a primer on everything you need to know about the Royal Wedding 2.0.

The good news: The big day is on May 19, a Saturday, which means no having to pretend to work on those spreadsheets for Bill in accounting while you livestream the carriage procession. The bad news: the ceremony begins at noon BST, or 7 a.m. ET/4 a.m. PT, so you won’t get to sleep in. After exchanging vows, the newlyweds will embark on their carriage procession at 1 p.m. their time.

Meghan and Harry will be wed at St. George’s Chapel at Windsor Castle, just outside of London. Not only has the chapel at the Queen’s private weekend getaway already been the setting of a number of royal weddings—including Queen Victoria’s children and Princess Eugenie’s upcoming nuptials—it’s also where Prince Harry was baptized.

#Repost @meghanmarkle and right back at you nutmegs. ・・・ My @suits_usa sisters ❤️ Celebrating our friendship of six years and counting. So much deep love for these two women and the sage advice, comforting meals and shoulders to cry on they’ve generously shared with me. Love you both @iamsarahgrafferty #ginatorres Thank you @danielboulud for making this night extra special for us ?

There’s not much we know for sure about the wedding guest list. Key members of the royal family, obviously, will be front row. And we know that Meghan and Harry have definitely invited 2,640 lucky members of the public to greet them on the grounds of Windsor Castle.

But that won’t stop us from speculating/daydreaming our dream guest lists. It’s been reported that “the cast and key executives” from Suits received their invites earlier this month; there’s also a good chance Pretty Little Liar Troian Bellisario, who’s married to Meghan’s on-screen love interest Patrick J. Adams, will be in the crowd. And it’s likely that Meghan’s BFFs Priyanka Chopra, Serena Williams and Canadian stylist Jessica Mulroney will be there.

Other possible attendees include Elton John, close friend of the late Princess Diana, who pretty much confirmed he received an invitation after cancelling two concerts that conflicted with the event. And in dreams-really-do-come-true news, Mel B hinted that the Spice Girls will be reuniting for royal performance (update: Mel C has since said that Scary Spice was just joking).

As for the wedding party, it’s tradition that children participate in royal weddings. Expect to see Prince George and Princess Charlotte as a page boy and bridesmaid, just like they were at Aunt Pippa’s wedding last May.

What will Meghan wear?

Again, not much has been confirmed about Meghan’s bridal look (turns out royal weddings are v. hush-hush) other than the fact that she has chosen a designer. But, if the most recent round of rumours are to be believed, we have a winner: the Daily Mail has pegged Australian-born duo Ralph & Russo, who Meghan also wore for her engagement photos, as the dress designers. London-based Canadian Erdem was an early favourite, while British bookies had to stop taking bets on the hot-topic question after an influx of wagers came in for Sarah Burton at Alexander McQueen (she designed Kate Middleton’s dress).

And it turns out one dress may not be enough. It’s been rumoured that Meghan will have two dresses for her special day: a gorgeous, more traditional gown for the ceremony and something a little more glam to party in later that night. We still don’t know who the designer is, so now that’s double the anticipation and excitement.

Did Meghan really need to get baptized?

The simple answer: no. The former actress, who attended a Catholic school growing up, did not need to become Anglican in order to marry Prince Harry. But the Daily Mail reports she decided to get baptized out of respect for the Queen’s role as the head of the Church of England. Awwwww.

Will Harry wear a ring?

That is TBD. There is no specific royal tradition or protocol that dictates whether men should wear a wedding band; it’s a matter of preference. Prince Charles, for example, has worn a ring since he put a ring on Camilla, Duchess of Cornwall (and also did so during his first marriage to Princess Diana). Prince William, on the other hand, made headlines when he decided to forgo wearing a ring simply because he doesn’t like jewellery. Prince Philip also doesn’t wear a wedding band.

What kind of cake will they have?

For their wedding cake Prince Harry and Ms. Meghan Markle have chosen pastry chef Claire Ptak, owner of the London-based bakery @violetcakeslondon. The couple have asked Claire to create a lemon elderflower cake that will incorporate the bright flavours of spring. It will be covered with buttercream and decorated with fresh flowers? Claire Ptak, who was raised in California, focuses on using seasonal and organic ingredients in her cakes. Ms. Markle previously interviewed Chef Ptak for her lifestyle website The Tig. Prince Harry and Ms. Markle are looking forward to sharing the cake with guests at their wedding at Windsor Castle on May 19th. ?PA

Reportedly, Meghan and Harry want one of their wedding cakes (yes, one—traditionally, royal weddings have at least two cakes, one of which is a nation-wide-fave fruit cake) to be banana flavoured. According to the Telegraph, the Prince loves all things banana. Long-time Meghan fans will also remember that the star posted a picture of two bananas “spooning” to her now-defunct Instagram in October 2016, which is believed to be when the couple started dating.

But Kensington Palace’s most recent update put the status of the banana cake into question. Meghan and Harry have officially chosen American-born, London-based pastry chef Claire Ptak to create a floral lemon elderflower cake that will “incorporate the bright flavours of spring.” Meghan actually interviewed Ptak when she ran her lifestyle website The Tig.

Have the invitations been sent out?

As of March 22, yes! Kensington Palace announced that a London-based printer, which has been doing invitations for the royal family since 1985, used American ink on English paper (an homage to Meghan’s former home, perhaps?). The palace also revealed that 200 guests have been invited to the private reception Prince Charles will be hosting at Frogmore House later that evening.

The invitations follow many years of Royal tradition and have been made by @BarnardWestwood. They feature the Three-Feathered Badge of the Prince of Wales printed in gold ink. pic.twitter.com/cd7LBmRJxO

What will Meghan and Harry’s official titles be?

Just as Wills and Kate became the Duke and Duchess of Cambridge on their wedding day, Meghan and Harry will also get shiny new titles. While they won’t officially be announced until May 19, according to the Telegraph, Brits are guessing the Queen will anoint them the Duke and Duchess of Sussex. Regardless, Meghan is getting an HRH in front of her name.

Does Meghan get some kind of a royal gift?

She does—and it’s a pretty cool one. For the occasion, Kensington Palace will create a coat of arms for Meghan (and, by extension, her family), the Daily Mail reports. We don’t know what it’ll look like yet, but it will be ready to print on the souvenir programmes. Kate also had one made when she married Will.

What kind of flowers will they have?

Prince Harry and Ms. Meghan Markle have chosen floral designer @philippacraddock to create the church flowers for their wedding? The displays in St George’s Chapel will feature foliage from The Crown Estate and Windsor Great Park, and will use seasonal plants including branches of beech, birch and hornbeam, as well as white garden roses, peonies and foxgloves. The designs will reflect the wild and natural landscapes from which many of the plants will be drawn. The Royal Parks will also supply pollinator-friendly plants from their wildflower meadows. These plants provide a great habitat for bees and help to sustain healthy and biodiverse ecosystems. ?PA

It’s safe to say St. George’s Chapel will have quite a different look from Will and Kate’s tree-lined aisle at their Westminster Abbey wedding. Over the Easter weekend, Kensington Palace announced that Meghan and Harry have chosen floral designer Philippa Craddock—who’s done arrangements for fashion houses Christian Dior and Alexander McQueen—for their wedding. The flower displays will feature seasonal plants like white garden roses and peonies. Bonus: the royal couple are thinking green when it comes to their wedding planning. The Royal Parks is also supplying pollinator-friendly flowers for the day, which create a healthy habitat for bees.

What’s on their wedding gift registry?

Prince Harry & Ms. Meghan Markle are incredibly grateful for the goodwill they have received since their engagement, & have asked that anyone who might wish to mark the occasion of their wedding considers giving to charity, instead of sending a gift. https://t.co/lzfrRmoeUv pic.twitter.com/nxrTZtIKBY

Nothing, actually. “Prince Harry & Ms. Meghan Markle are incredibly grateful for the goodwill they have received since their engagement,” Kensington Palace said in a statement on Twitter. “[They] have asked that anyone who might wish to mark the occasion of their wedding considers giving to charity, instead of sending a gift.”

What counts as royal wedding transportation?

Well, for Meghan and Harry it’s exactly one horse-drawn carriage. Kensington Palace has revealed that the couple has chosen the Ascot Landau carriage for their procession, which will take the newlyweds through Windsor Town. The carriage will be pulled by adorable father-and-son Windsor Grey Horse duo, Storm and Tyrone.

Prince Harry and Ms. Meghan Markle have selected the Ascot Landau carriage for their procession through Windsor Town after their wedding on May 19th. pic.twitter.com/uR9bKgqmiX

Who’s walking Meghan down the aisle?

It’s been uncertain up until now, but Kensington Palace has officially confirmed that Meghan’s dad, Thomas Markle, will be walking his daughter down the aisle on May 19.

Both of Meghan’s parents will be arriving in the U.K. a few days before the wedding in order to get some quality family time in—with Harry, Will and Kate, and even Queen Elizabeth.

How will Princess Diana’s family be involved?

It makes sense that, of course, Prince Harry would want to include his late mother’s family in the big day. Apart from all three of Princess Diana’s siblings being at the ceremony, one of her older sisters, Jane Fellowes, will give the reading. “Prince Harry and Ms. Markle both feel honoured that Lady Jane will be representing her family and helping to celebrate the memory of the late Princess on the wedding day,” Kensington Palace said in a statement.

Who will be Meghan’s maid of honour?

As it turns out, no one! In a media briefing earlier today, Prince Harry’s communications secretary, Jason Knauf, won’t have anyone filling the maid of honour role. Instead, the bridal party will simply be made up of children. However, he did assure everyone that Meghan will have friends supporting her throughout the day.

Will Prince Louis be there?

In the most recent media briefing, the Palace also confirmed that Kate Middleton will be in attendance (phew!). But the little HRH Prince Louis, who won’t even be one month old by the wedding date, will be staying home.

Dreaming of your own royal wedding? Sandals Resorts can help make your day perfect.