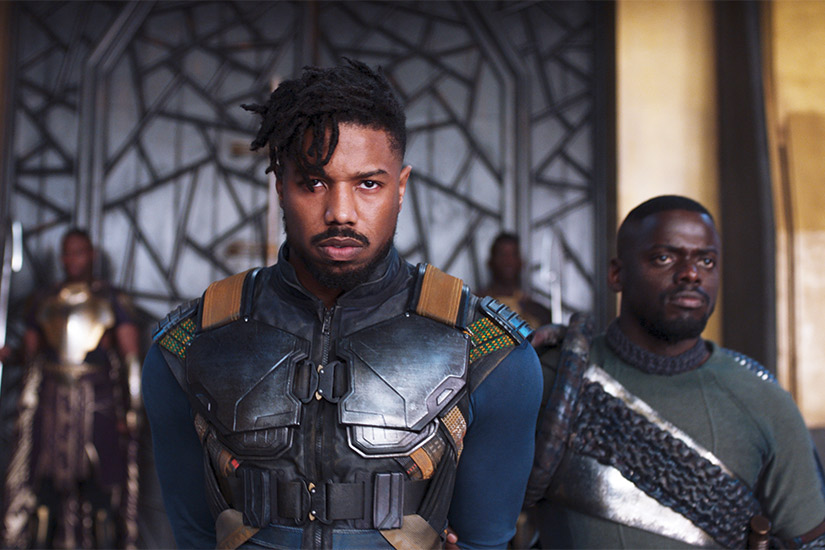 Michael B. Jordan says he can relate to the character he plays in Marvel’s forthcoming Black Panther in a few ways. After first establishing that Erik Killmonger, an exiled warrior coming for the kingdom of African ruler T’Challa (Chadwick Boseman), is “methodical, angry and passionate and wants the throne and will do anything to get it,” the 31-year-old actor goes on to say: “He’s from outside [Wakanda], so he feels he could do a better job ruling the kingdom. He’s smart, he’s dangerous and he’s a heartthrob—kind of good-looking.”

When asked which parts of Killmonger’s story he most connected with, Jordan immediately replies: “Everything I just said. Especially the ‘good-looking’ part.” And then he chuckles.

The actor—who has starred in critically acclaimed films like Fruitvale Station and Creed and did a baby-faced turn in HBO’s The Wire—is joking about that last part. But much like Black Panther itself—a strong statement about black empowerment made via the action-packed vehicle of a superhero film—there’s a deadly ser­ious second layer to all of this, as becomes evident when Jordan is pushed to go beyond his initial super­ficial answer. “There’s a certain sense of frustration he has with the way the world works, and I, as a black man, know what that feels like,” he elaborates in a tone that is understandably different from that of the relaxed banter of before. “There’s a layer of relatability I had there that I got a chance to indulge in.”

This character is described as a villain. Do you really think he is one? “That’s a good question. No, I don’t. I think the most interesting ‘villains’ are the ones you empathize with when you see their point of view and their pain. Hopefully, people will take that away from this character. He’s about change, and he’s willing to take things into his own hands.”

The original Black Panther—which started as a comic-book series in the 1960s—depicted the first African-American superhero and was a huge step toward diversity. Where do you think this 2018 version fits into the pop-culture universe? “This is an equally huge deal, I think. People will be able to identify with this character, see themselves onscreen. Also, they’ll see black people depicted in a better light: as strong characters in a place of power, in their own nations, with their own technology. I think that’s very inspiring and enriching. It’s definitely time for it.”

It certainly is a timely film…. “Everything happens for a reason. It’s kind of like medicine, in a way, because it’s what people need right now. They need to feel hopeful and inspired; I think a lot of people are feeling frustrated and very down about everything that’s going on in [America] right now. It’s time to bring things back into perspective in a positive way.”

Speaking of good things, you’re working with Ryan Coogler again, who has directed you in a couple of other films. Is it fair to say you’re kind of his muse? “I feel good about that! I’m really lucky to have met him so early in our careers and to have built this friendship. He’s a brother of mine, and we have a shorthand and chemistry that’s a lot of fun.”

You call him one of your best friends. Does that relationship ever get tricky when he’s your boss? “We don’t look at it like that. We both have shit to lose, we both want the best movie possible and I trust him and he trusts me. We keep it real, and if he tells me ‘That shit was corny,’ we’ll laugh about it and try something else. There’s nothing I can’t tell him or he can’t say to me.”