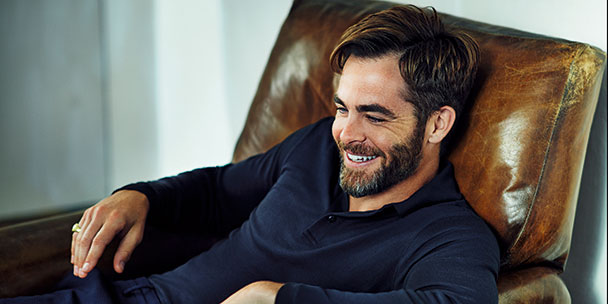 Chris Pine speaks his mind but only when he feels like it—just as you would expect of the actor charged with playing the iconic Captain Kirk in the latest Star Trek films. Ask him if he always wanted to be an actor and the L.A. native, who recently signed on as the face of Armani’s Code Ice fragrance, flatly answers “No.” When prodded, the 34-year-old adds that he wanted to be a baseball player. Ask him what kind of music he plays and he says he likes “a good jam.” It’s a blunt form of honesty that is downright charming—maybe because a lack of bullshit is rare in Hollywood. We sat down with Pine to talk about a few things on which he would like to elaborate: beards, buds and “Mr. Armani.”

You’re in the upcoming Horrible Bosses 2. That kind of comedic ensemble is new for you. What appeals to you about comedy?
“I haven’t had much of an opportunity to do it, especially at the level of [Jason] Bateman, [Charlie] Day and [Jason] Sudeikis. It’s just like a high-wire act: They know the script backwards and forwards, and they talk about the story structure and the shape of the scene way more than in any h drama or action I’ve ever done. By the time the camera rolls, they can just let loose and try a bunch of stuff. I love having to try to keep up with them—their minds are so fast. There’s a music to it. You don’t have time to second-guess yourself or overthink. You just have to pull the trigger, and I like that.”

That whole concept of improv sounds terrifying to someone who has never done it.
“Yeah, for my money, I think everyone should try it. It should be compulsory while you’re studying acting because, more than anything else, you just get out of your head. You’re in your body, you can’t think—and I think that thinking is the worst thing an actor can do.”

How did you feel about playing Prince Charming in this December’s Disney musical, Into the Woods? It’s a loaded character.
“I was taxed with playing a stereotype, but I didn’t really think about Prince Charming; I just wanted to sing, really. [Laughs] I wanted the chance to be in a musical, which I had never done before. The story is way more involved and beautiful than I ever really expected. It’s essentially about all of these two-dimensional wooden storybook characters becoming real people. The Prince Charming character that I play is pretty two-dimensional. [Laughs] It was a fun character to play. He’s funny—but not the brightest bulb.”

How did the singing go?
“It was way more difficult than I imagined. I always thought I was a pretty good singer, but once you step out of the great acoustics of your shower, you realize that there’s more nuance to what you have to do. Stepping into the recording booth—that’s when you really get to see how well you’re singing. The mics in those booths pick up everything. I really appreciated the challenge, though. I learned a lot from watching people like Anna Kendrick, who has sung all her life and really knows how to communicate through singing.”

Are you a bit of a risk taker? It sounds like lately you’ve been throwing yourself into tough stuff: improv, singing…
“I don’t know if I’d characterize it as risk taking. Every time I said yes to these things, they just seemed like a lot of fun. I was driven more by the idea of enjoying myself, I guess. You’ve heard it before, I’m sure, but if something scares you, you should do it, because it’s a challenge and it makes you grow.”

Some say we’ve reached what they call “peak beard,” because these days every hipster seems to have one. Now that you’re rocking one, how do you feel about being thought of as a hipster?
“Oh, man…well, I’ve always lived in L.A.’s hipster ter­ritory, so I don’t mind it. I’m not really a true, defined hipster. I do, at the moment, have kind of a weirdish haircut, and I do have a beard, and I do occasionally wear skinny jeans…. I saw one dude wearing one of those Davy Crockett—what the hell are they?”

A raccoon tail?
“Yeah, yeah! The raccoon tail! This guy was wearing double raccoon tails. I haven’t gotten to that territory yet, but I’d rather live in hipster territory in L.A. than the weird, jock-y, mid-Hollywood area.”

Are you high maintenance?
“I’m probably more high maintenance than the average Joe because I’m an actor; you do become more and more metrosexual as you do this job. But, I don’t know, if I’m on a job where I have to shave every day, then I shave every day. And if I’m not, I don’t. I have a beard now because I’m not working and there’s no real reason to shave, so why do it? I just want to see how much more grey I can get in my beard.”

Did going grey bum you out at first?
“No, I haven’t really thought about it at all. My dad went grey pretty early, so I don’t mind it.”

What do you admire about the Armani brand?
“I appreciate the attention to detail and craftsmanship and the time that goes into Mr. Armani’s work. Here’s a man who began this global empire at the age of 40, I think—he’d already had a complete life. I love the story of it.”

Is there something you know now that you wish you’d known at 20—something that you could go back and tell yourself?
“Yeah. ‘Youth is wasted on the young’: There could not be a truer statement. I’d probably tell my younger self to chill out, to take a deep breath. I was a pretty hard worker when I was a [student]. I’d just basic­ally say ‘Enjoy everything a bit more because, like your dad said, you’ll wake up one day and you’ll be 34.’ I’d just say ‘Everything will work out, so enjoy the day.’”

ELLE Man: How to properly groom your beard

What do you like to do in your downtime?
“I’ve been gone for a long time working, so I like to make sure I just have good hangout time with my friends. A lot of them are getting married now and having kids, so I want to steal as much time as I can with them. I also like to play music, and I like design, so I’m working on my house. It’s mid-century rustic, so it’s like a really good blend of ranch house meets Palm Springs.”

What are you looking forward to?
“I’m looking forward to making this film called Mantivities that I wrote with my buddies. We’ve been trying to do it for a long time, so I’m hoping to get that off the ground this year. I’d love to do more comedy—I really had a good time on Horrible Bosses 2.”

What was the experience of writing like?
“Really fun! It was five guys; we went and improv’d for like a week, and then we cherry-picked the moments from the improvs that we thought were funny and wrote scenes off that. It was a lot of fun—just laughing with your buddies.”

READ MORE:
A guy’s guide to the ultimate cologne
How to properly groom your beard
ELLE Man: Interview with football star Mike Bradwell