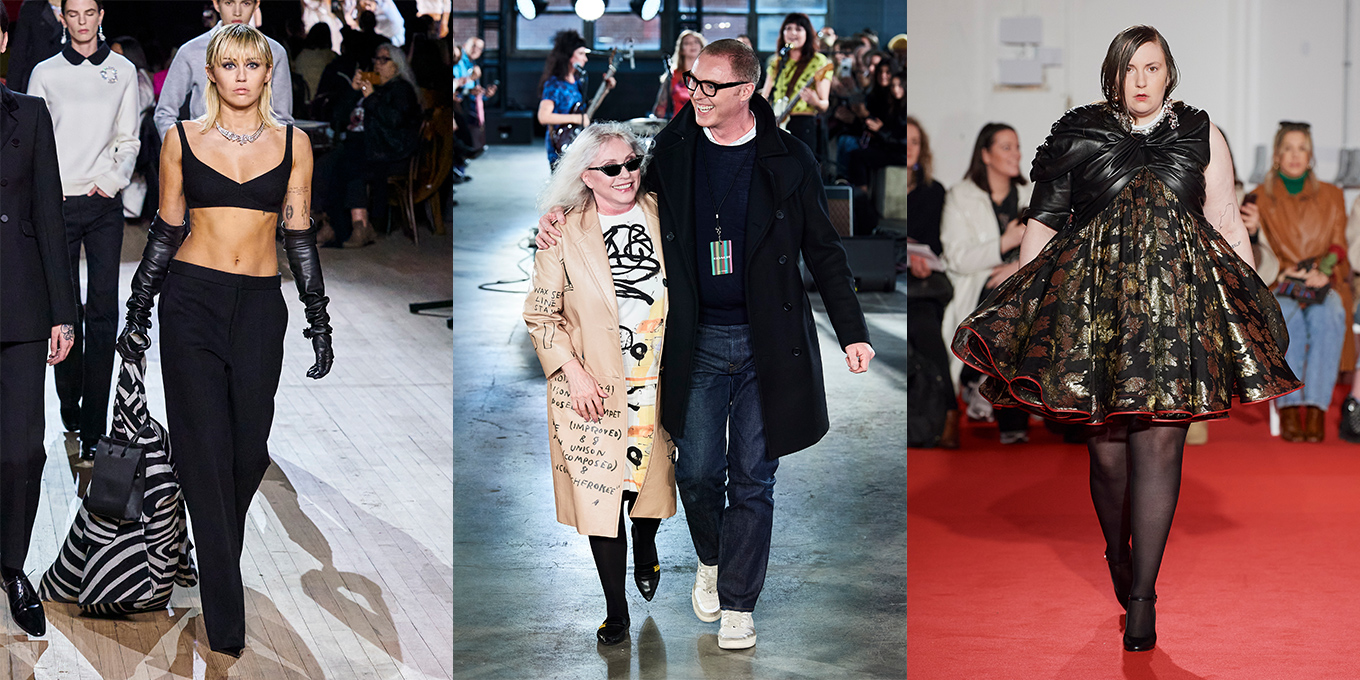 Fashion month has been nothing if not full of celebrity surprises. From TikTok star takeovers to the cast of Netflix’s Cheer sitting front row, one of the only things that can rival the actual collections are the stars who attend the shows. This season has been full of interesting appearances, especially on the runway. Let’s take a look at some of the highlights, including some stars who made their runway debuts.

She exudes the confidence of someone who has strutted on the runway before — and that’s because she has. Back in 2014, she walked in Jeremy Scott’s spring/summer 2015 show as part of NYFW.

Actor and writer Lena Dunham made her first runway appearance at the 16Arlington show in London and apparently it was a personal request from the designers. “When my friends at @16arlington asked me to walk the runway, I basically yelled “YES WHEN!?” Who doesn’t want to be a supermodel!?” she captioned an Instagram post.

When my friends at @16arlington asked me to walk the runway, I basically yelled “YES WHEN!?” Who doesn’t want to be a supermodel!? I don't get out of bed for less than $10,000 a day, just like Linda Evangelista (JK, will work for chips.) It was only after my initial scream of joy that I realized this would hit on a lot of my insecurities- about my body, desire-ability and general coolness. But Marco & Federica are such sensitive, funny and wise artists and they created a show that could make any woman feel beautiful and unusual and happy in her total uniqueness. I loved meeting girls from all over the world (wow, your job is a lot harder than it looks- I can barely move my legs after that strut, so hats off to models) and I’m so proud to call the designers my friends. Congratulations, my loves, on your first runway show! What a way to spend #ValentinesDay 😍 #LFW #LondonFashionWeek (📸: Mitchell Sams)

Dunham said that she initially felt insecure about walking in the show, but became more comfortable knowing that designers Marco and Frederica “created a show that could make any woman feel beautiful and unusual and happy in her total uniqueness.”

Debbie Harry is arguably one of the coolest women in New York City (and ever), so her appearance on the runway at the Coach NYFW show really took the already beautiful collection to the next level.

More than just a dream. Blondie's #DebbieHarry closed-out the #CoachFW20 runway show with a surprise performance and a walk down the runway with creative director @StuartVevers. 👏💥👏 #CoachNY #NYFW

In true rockstar fashion, the Blondie front-woman strutted down the catwalk towards the band and performed “Dreaming.” Very casual and immediately iconic, if we do say so ourselves.

Indie-pop solo artist Caroline Polachek (formerly of the group Chairlift) made a memorable runway debut at the Puppets and Puppets show in London. Her bold stage presence translated well onto the catwalk, where she donned a silky green statement gown.

Waltz of the dreamers @puppetsandpuppets ❣️

Actor and Red Table Talk host Jada Pinkett Smith made an appearance on the Philipp Plein runway, in which a larger Kobe Bryan tribute was taking place (albeit, not without some controversy). She wore a Swarovski-crystal adorned hoodie with Bryant’s jersey number, 24, on the front.

HEROES COME AND GO…..LEGENDS LIVE FOREVER 🙏 happy to be able to support with the sales of this capsule the MAMBA & MAMBACITA SPORTS FOUNDATION 🖤