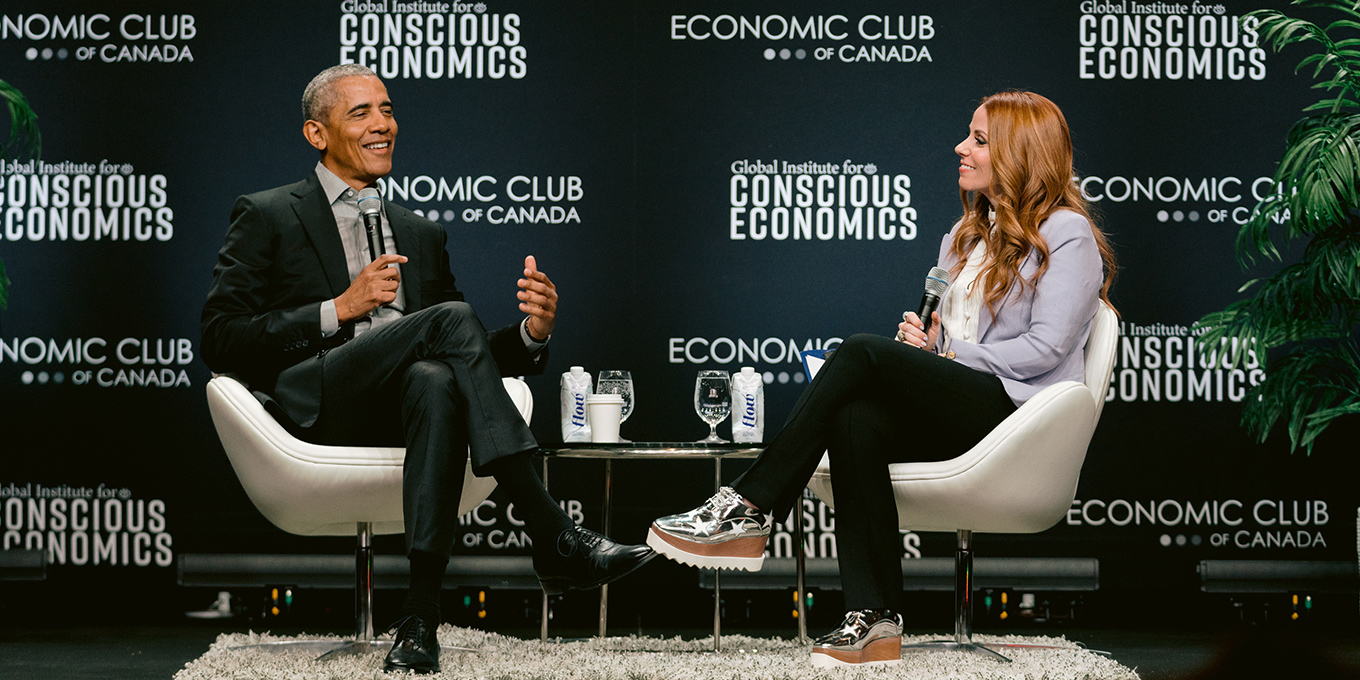 You may know former president Barack Obama as a loving husband and a tastemaker when it comes to music. Today in Toronto, he proved that he’s still got both qualities going for him. While speaking at an event hosted by the Economic Club of Canada called “Future Skills,” he revealed his tips to a successful marriage and some of his Canadian music favourites.

Obama’s number one suggestion for healthy relationships? Active listening. He referred to his marriage to Michelle Obama: “It took me a long time to figure out that after listening, I should not try to solve her problem,” he explained to Rhiannon Rosalind, president, CEO and founder of the Economic Club of Canada and host of the event. “But I should just say ‘Yeah, I see why that would be upsetting and that makes sense and I get it.’ Rather than, ‘Well, if this is really upsetting you, why don’t you try this?’ [That’s the] wrong thing to do.”

When asked about some of his current music faves, Obama mentioned Jessie Reyez, who performed at the event. “That young lady who just I met, Jessie Reyez, that was a nice song that she was just singing,” Obama said, referring to “Figures.” Reyez hit the stage at the Metro Toronto Convention Centre just before Obama for an acoustic set, rocking her signature top knot and checkered Vans.

He also mentioned Canadian R&B king Daniel Caesar. “That’s Michelle’s favourite,” Obama said. “My favourite songs are basically the songs Michelle decides to play.” Based on her most recent workout playlist, we would say the same.

The event is part one of a four-part series by the Economic Club of Canada in conjunction with the Global Institute for Conscious called “The Future Of Work & New Economy.” Obama also discussed climate change, workplace diversity and his affinity for Canadians. Check out some tweets from event attendees below.

Loved Barack Obama’s take on why it’s so important to have a diverse team when problem-solving. Said that he can admit he blind spots and if he kept hiring people that thought the way he did then they would all have those same blind spots and everything would stay the same.

Recognizing that everyone has something to contribute is necessary to build relationships with those you work with. Listening to the inspiring words from @BarackObama with an amazing group of students from @HTSRichmondHill @Toronto pic.twitter.com/7zjybZ8iYj

“I love Canadians as they are reasonable” Barack Obama in Toronto at Economic Club of Canada pic.twitter.com/UR9RRnz2i7