"There's no way I would be where I am without her." 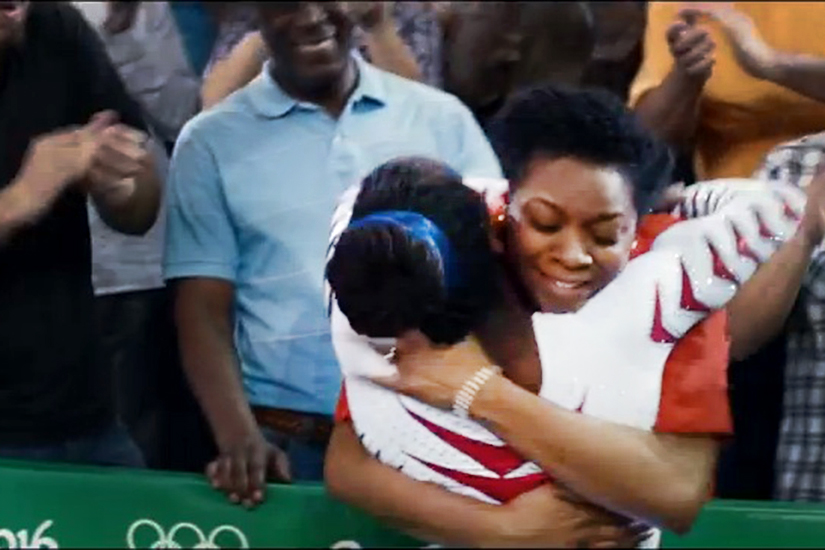 Trampolining may be a solo sport, but when Canadian Olympic gold-medallist Rosie MacLennan steps out for her routine, there’s someone mimicking her every move. “My family says I jump every jump with her [from the stands],” admits Rosie’s mom, Jane MacLennan. “My shoulders almost go as high as she does!”

Of course, such jitters come with the job desription of “mom of an Olympian”; someone who puts in just as much hard work without the credit (or the medals!). Enter P&G’s new “Thank you, Mom campaign,” which pays homage to the unsung heroes on the sidelines, bleachers and in the stands. (See the video below. Warning #1: you’ll need Kleenex.) “It was like I was watching my own story,” says Rosie, who along with her mom Jane, spoke to us about their bond. (Warning #2: you’ll want to call your mom after reading…)

Rosie, tell us how your mom supported your Olympic dream.
I don’t know how much I can narrow it down! I was the youngest of four kids and she always made sure that I was included, and that being too young and too little was never an excuse. Mentally, she taught me that there were no barriers or obstacles that I couldn’t overcome. And I know that even if I’m on the other side of the planet, if I picked up the phone and needed her, she would be there.

And of course, she was the personal chauffer for you and your three siblings!
[Laughs] For a long time it was dance and trampoline, so she was shuttling me back and forth between the two. It was a lot of multi-tasking. She was making food, and putting us in the car, and making sure we were doing homework on the way to one activity from the other. I think she was maybe a little relieved when I got my driver’s licence!

Jane, what was Rosie like as a little girl?
She was absolutely tenacious, and whatever her older siblings did she wanted to do. For instance, she wanted to water ski when she was 18 months old, so my father just made her a small pair of skis. She would paddle with the rest of them just with a size-proportioned paddle. Age was never a restriction. It was just a matter of figuring out how we could make it doable for her.

And when did you realize she had a gift for the trampoline?
She had a gift for many things. Trampoline was just the one she finally decided to focus on once she hit university. I think it’s very good to put a child in activities; you get the socialization, to have fun, to be active. I always thought competition was a healthy thing. I thought it taught them a lot of life skills. And we always try to keep it realistic and focus on the personal journey, not competing against others.

Rosie, how do you stay in touch with your mom nowadays?
We have a family chat that all six of us are in, so we all type into that. I usually call my parents five times a week. And it’s a little bit hectic now with training, but I try and have my parents down from brunches or for dinner, or we’ll go with my grandma to church and take her to brunch.

Will you go down to Rio, Jane?
We are all going to Rio; we were all in London and I think it’s important because no matter how things go, she realizes her family are still there for her, life will carry on, the sun will come up.

Rosie, what’s it like to have your family there watching you?
At the 2012 Olympics in London, obviously I was a little nervous, and I remember going through my routine in my head, and opening my eyes and in a stadium of 17,000 people seeing my family right in front of me. That was probably the best thing that could have happened for me because I knew that no matter what happened, my family were my anchors and they would be there for me and they would love me the same.

READ MORE:
Our health editor tests three new workouts
Out of joint: Confessions of a pot addict
MUST WATCH: Your “Aunt Flo” just got her own video campaign