How everyday habits can make you fat

Trying to shed pounds? Surprise! From staying up late to not washing your hands, your everyday habits could be making you fat. 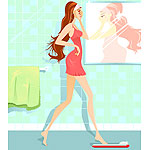 You work out religiously — or at least when the spirit moves you. You consider trans fats and soda to be pure evil. Yet, you’re still struggling to maintain a healthy weight. What gives? Well, scientists say that simply hanging out with overweight friends or not washing your hands enough can lead to excess pounds. Read on to find out how you may be unwittingly expanding your waistline.

You wash your hands — when you remember
A virus called adenovirus-36 — which is spread through food, saliva and touching — may cause obesity by turning stem cells into fat cells. A recent study by Dr. Nikhil Dhurandhar at the Pennington Biomedical Research Centre at Louisiana State University in Baton Rouge found that rats injected with the virus gained significantly more weight than their uninfected pals despite similar food intake. In another study, researchers at the University of Wisconsin in Madison and Obetech Obesity Research Center in Richmond, Va., analyzed samples of human blood infected with the virus and discovered a significant association with obesity. “Since we don’t have a vaccine to prevent the virus, good hygiene practices, like washing your hands, might be a good idea [to avoid it],” says Dhurandhar.

You have fat friends
There’s no need to ditch your social circle, but if your friends have gained weight, you have a greater chance of packing on the pounds too — so consider catching up at the gym instead of over a plate of nachos. A recent study by Harvard Medical School in Boston, conducted on more than 12,000 people over 32 years, concluded that having an overweight friend, sibling or spouse increased one’s risk of obesity by 37 to 57 percent. “There is some suggestive evidence that when people around you gain weight, it changes your idea of what an acceptable body size is,” says lead researcher Dr. Nicholas Christakis. Fight back by taking on diet and exercise challenges together.

You dress for July — even though it’s February
Your sheer silk top may be the height of fashion, but if it’s not keeping you warm it could trigger cravings for calorie-rich foods. To maintain our core temperature (about 37°C), we tend to drink more liquids in summer and eat heavier foods in winter, explains Brian Wansink in his book Mindless Eating: Why We Eat More Than We Think. Research by the University of Massachusetts Medical School in Worcester discovered that people ate 86 more calories each day in fall than in spring, with body weight peaking in winter. According to Wansink, dressing warmly when the thermostat dips may help avoid physiological cues to overeat.

You’re the ultimate carnivore
Lean meats like pork tenderloin and turkey breast are excellent sources of iron and vitamin B12, but they could also be the culprits behind sneaky weight gain. Research by Dr. Magdalena Rosell at the University of Oxford in the United Kingdom indicates that, on average, women who follow a vegetarian diet weigh 4.6 pounds less than non-vegetarians. Of the 21,996 people studied, those who gave up meat for a vegan diet gained only 30 grams each year compared to meat eaters, who gained 42 grams. (Vegetarians gained 39 grams each year.) You may not have to give up meat, says Rosell, but increasing your consumption of vegetables and whole grains can help you stay lean.

Looking to detox? We have the plan for youYou’re a night owl
If you’re routinely losing out on sleep, chances are, losing weight is more challenging for you. Sleep deprivation can increase your risk of obesity by boosting ghrelin (an appetite stimulating hormone) and lowering leptin (an appetite suppressor), says Ramona Josephson, a registered dietitian in Vancouver. One study from the University of Bristol in the United Kingdom found that, compared to a healthy eight hours of shut-eye, each one-hour decrease in sleep duration was linked to almost three percent more body fat. Worse still, research by the University of California at Irvine suggests that people are more likely to binge-eat at night, in darkened rooms or restaurants and during the darker seasons of fall and winter. Take preventive measures by getting to bed earlier and eating meals in brighter light, so you’re less likely to overindulge. Check out these 5 reasons to get your beauty sleep.

You eat at “healthy” restaurants
According to a study co-authored by Wansink last September, people tend to under estimate calories at so-called “healthy” restaurants — and they’re more likely to order high-calorie extras like sodas, chips or desserts there too. In fact, study participants ended up consuming 56 percent more calories at Subway than at McDonald’s. So, don’t get duped by healthy claims: ask for nutrition information everywhere you go, and if you have to guesstimate the calories, add up the individual components and double your total for a more accurate tally, says Wansink. (In his study, Subway diners estimated, on average, that a large meal was 646 calories — less than half of the actual 1,327 calories it contained.)

You never weigh yourself
There’s no need to be a slave to the scale, but a recent study from the University of Minnesota found that dieters who weighed themselves daily lost about 12 pounds over two years, while those who never did shed only four pounds. Other research, published in The New England Journal of Medicine, concluded that those who have daily weigh-ins (along with face-to-face support) are 82 percent less likely to regain five pounds than a control group without weigh-ins or support.

You’re a stress junkie
We all know stress is bad for us — but new research reveals that women are particularly prone to developing poor eating habits when they’re under pressure. In an experiment led by Dr. Debra Zellner, a psychology professor at Montclair State University in New Jersey, men and women were given sets of word jumbles in different difficulty levels (easy and hard) with bowls of grapes, chips, peanuts and M&Ms nearby. The women working on the most difficult puzzles were more likely to eat the M&Ms and reported feeling more stressed than women with the easier puzzles, who mostly ate grapes. Men showed opposite results: those working on the easy jumbles ate the most M&Ms and chips. The study demonstrates that among women, the trigger to scarf down unhealthy foods may be psychological, not bio logical. “It’s called ‘disinhibition,’” says Zellner. “We think women choose chocolate when stressed because so many normally deprive themselves of high-fat and sugary foods.” So, even if it’s counterintuitive, eating a few small treats each day — whether it’s salty pretzels or a scoop of cookie-dough ice cream — may make these foods less “forbidden” and possibly less appealing, even when you’re under the gun.