Let it Grow: Moving on From Body-Hair Stigma

The pandemic has made us rethink everything from clothing choices to the need to wear makeup, and it’s time to finally move on from body-hair stigma too. 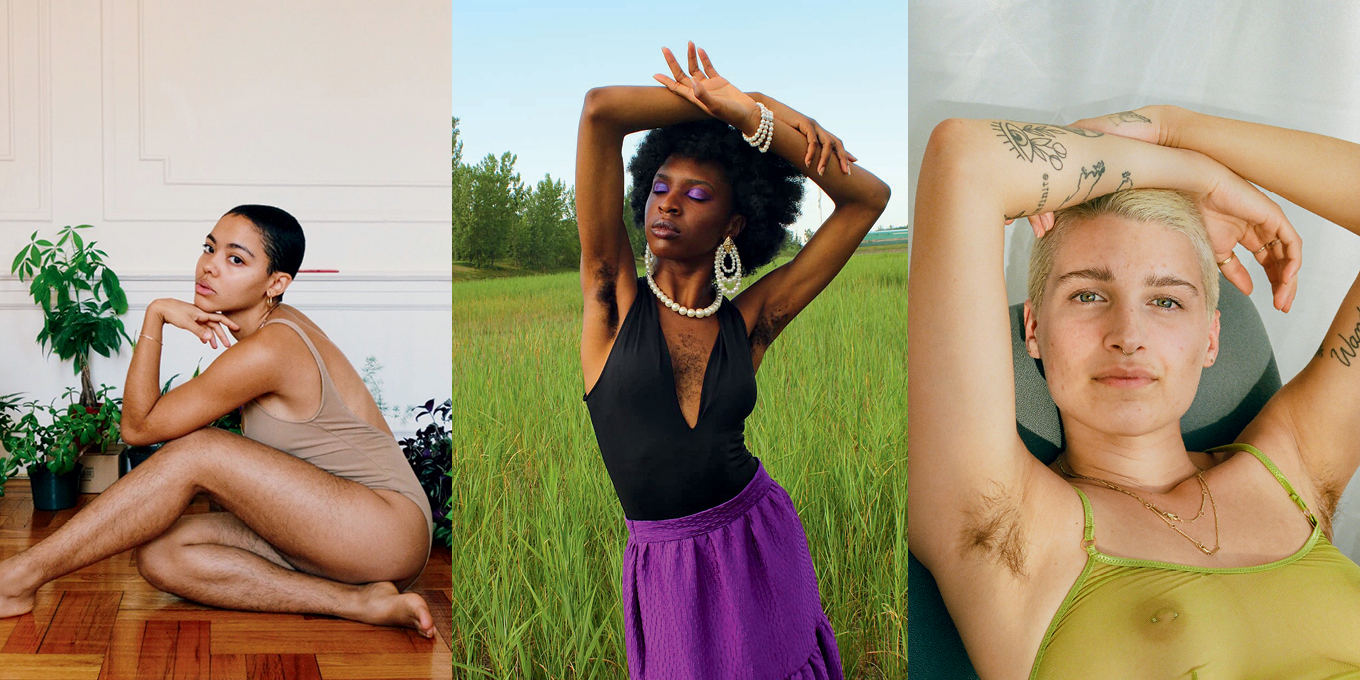 The past year and a half has seen many of us take a step back to examine societal norms surrounding aesthetics—goodbye, bras, makeup and constrictive clothing— and ask an honest question: Who am I really doing this for, anyway? Now more people are questioning their body-hair- removal routines too.

The smooth look is nothing new; it goes back to around 3000 BC, when the world’s oldest known razors were made from copper in Egypt and India. Over the centuries, everything from pumice stones to tweezers to thread to sugar were used for hair removal. Hairless skin was less popular during the Victorian era, when even a glimpse of a woman’s ankle was scandalous, but the modern trend for near-total shaving is believed to be related to Charles Darwin’s famous theory of “natural selection,” which he explained in his 1871 book, The Descent of Man, and Selection in Relation to Sex. In the book, Darwin hypothesized that modern Homo sapiens have little body hair compared to our ancestors because they tended toward the less hairy when selecting mates, meaning the more hirsute among them were less likely to reproduce and pass down their hairy genes. By the beginning of the 20th century, middle-class and affluent North American women had already started associating smooth skin with femininity and desirability.

The first razor designed specifically for women, Gillette’s Milady Décolleté, hit shelves in 1915. Up until that point, the company had only been marketing to men, but with sleeveless tops growing in popularity, advertisements in women’s magazines started calling the razor the must-have solution to an “embarrassing personal problem.” A shortage of nylon stockings during the Second World War and the appearance of miniskirts, bikinis and pin-up styles were all factors in shaving becoming so popular that by 1964, 98 percent of women in America shaved regularly. Though temporarily rejected by the hippie movement of the 1960s and ’70s, the trend for smooth skin returned in full force with the arrival of the Brazilian bikini in the 1980s and, along with it, an ever-growing variety of hair-removal methods, including laser and electrolysis. What started as a lucrative ad campaign bent on shaping our collective vision of beauty and femininity has grown into a universal discomfort with the female body in its natural state.

“People are very uncomfortable with the idea [of not shaving], but you have to see things for what they are, and shaving for women is meant to make them look prepubescent,” says Roxanne Hallal, a sexology master’s student and ambassador for the Quebec-based Maipoils movement, which provides a safe environment for anyone who wants to explore their freedom of choice regarding body hair. “The difference between a girl and a woman is puberty: body shape, periods, hair. And the second these become visible, we’re expected to make them disappear.”

Not only has this cult of eternal youth affected our relationship with our own hair but we’ve also been convinced that body hair is dirty. “We incorrectly believe that removing our body hair is more hygienic, but it actually has an important role, especially in the case of the genitals,” says Hallal. “We get pushed into a never-ending fight with our bodies because hair always grows back, sometimes darker and thicker than before.”

In the past few years, a mini body-hair revolution has taken off, highlighted by initiatives like Januhairy and Maipoils, which encourage people to let it grow, and celebrities like Bella Thorne, Jemima Kirke and Ashley Graham, who’ve appeared in public with hairy armpits or legs, prompting waves of support for going au naturel.

For some, the simple recognition that removing hair is a choice—not an obligation—is a radical act of self-realization. “Showing my body hair was like letting go of a big secret,” says Esther Calixte-Bea (a.k.a. Queen Esie), an artist and model and an important figure in the pro-body-hair movement. In 2019, the young Quebecer, who has been hairy since adolescence and was recently on the cover of UK Glamour, decided to stop shaving her chest and create a series of self-portraits, titled The Lavender Project, to immortalize the turning point in what she describes as a long process of rebuilding her self-esteem. Though she didn’t consider herself an activist at first, Calixte-Bea quickly saw the positive impact that her images had on thousands of people around the world. “Photography has an immense power over our perception of beauty, and body hair can be beautiful, classy and glamorous,” she says.

For others, it’s about taking control of their physical identity. “My relationship with my hair helped me make peace with my gender,” says model Alex Lacelle. On their Instagram, Lacelle, who’s non- binary and queer, shares photos of themself with their body hair visible. Accustomed to the stares of others, they say that making the choice to keep their hair helped them take back control of their body and identity, in both the public sphere and their personal relationships. “If the person I’m with is bothered by or judges me for my hair, that’s their problem, not mine,” says Lacelle. Acting feminine can be a heavy burden to bear, so making certain choices, including shaving their head, wearing the unconventional clothes they prefer and letting their body hair grow, brought a feeling of freedom. “It allowed me to rediscover myself away from the expectations of others,” they add. “Whatever I do, I know that I’m doing it for myself—always.”

So the next time you reach for the razor, ask yourself whether that’s really what you want to do. Because if it isn’t, you can put it right back down—you certainly wouldn’t be alone.

Skin Savers: Here’s Your 101 to Sun Protection
Should I Freeze My Eggs?
12 Indigenous-Owned Beauty Brands to Know and Support Now