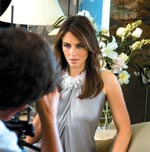 When Estée Lauder introduced her original Re-Nutriv moisturizer in 1958, store managers could hardly keep up with the demand. Women from all walks of life stormed the counters, despite its $115 price tag. In defence of the cost — at the time, the highest ever for a skin cream and the equivalent of about $600 in today’s currency — Lauder said, “The materials that go into a
famous painting may not add up to its selling price, but it’s the final creation you’re paying for.” Women were sold.

he product’s upscale packaging, in solid “gold” jars worthy of Byzantium, combined with Lauder’s aspirational touch made her a pioneer in luxury skin care and set the tone for customer expectations for the next 50 years. The most recent addition to this classic line, a gold-flecked Lifting Serum, is no exception.

“To this day, the Re-Nutriv user is in a different category of customer,” says Evelyn Lauder, senior corporate vice-president of The Estée Lauder Companies. “This is a woman who is more interested in pampering herself and in protecting her skin so that as she ages she can delay the necessity of interventions that may not turn out to be as successful as she would have hoped.”

As part of its science-over-surgery message, Re-Nutriv Lifting Serum uses glucosamine technology, specifically non-acid skin refinishers, to enhance smoothness while brightening with micro-powdered South Sea pearls, Japanese cypress extract and bio-fermented yeast, which fade the melanin content in age spots. The key ingredient, the OGG1 enzyme, targets the oxidative effects of environmental exposure, including ozone, by boosting skin’s natural collagen and elastin production. As we age, levels of OGG1 decrease, and our natural ability to fight environmental assaults starts to weaken, says Dr. Daniel Maes, Estée Lauder’s vice-president of Research and Development. “The interaction of UV light and nitrogen dioxide, contained in car exhaust, factory pollution and smoke — what we call ground level ozone — can lead to oxidative effects similar to those caused by UVA exposure,” he says.

With that knowledge, Re-Nutriv, the line that used to only cater to the mature woman’s skin care concerns, is now recommended for women as young as 30. “It’s prevention,” says Lauder. “Medicine and good skin care go hand in hand. In the same way you take care of yourself to avoid getting sick, you should try to keep your skin youthful longer because it’s much harder to repair once the collagen layers have collapsed. Putting Re-Nutriv on the skin in advance delays some of the damage, giving you back that glow.” Clearly, Re-Nutriv is still Estée Lauder’s golden child.