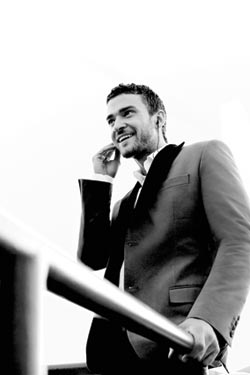 Justin Timberlake must have a fridge stocked full of Red Bull — after a week that included hosting Saturday Night Live (for the third time), co-chairing the Metropolitan Museum of Art’s Costume Institute Gala and dodging the paparazzi with his GF, Jessica Biel, you’d think he’d be dozing off during our interview.

Instead, the multi-talented musician turned mogul is wide awake and focused on his latest gig as the face of Play, Givenchy’s new woody-citrus scent spiked with amyris wood and mandarin orange. Perched on a white leather banquette in a penthouse in New York’s Chelsea neighbourhood, Timberlake — dressed head to toe in Givenchy, save for his J.Lindeberg loafers and ruler-thin Jil Sander tie — modestly says that he’s not sure why the luxury brand chose him for the role. For Givenchy, the decision was a no-brainer. “When it comes to music and cool things, he is the man,” says Alain Lorenzo, president and CEO for Parfums Givenchy. “There were no other candidates in the running.”

Despite the obvious fit for the brand, Timberlake wanted to make sure that the luxury retailer knew that his Type A resumé trumped his experience with fragrance. “[When Givenchy contacted me] I said to them, ‘Well, let me just throw this out there to you guys: I don’t wear cologne,’” he recalls. “And they said, ‘Well, why don’t you give us a chance to make something that you would wear?’” The result is two versions of the scent: a softer eau de toilette and a more intense incarnation with a stronger hit of citrus and bergamot top notes. With this project under his belt, can a bottle of eau de Justin be far behind? Timberlake says that he’s happier fronting a fragrance than developinghis own: “I’ll let Sarah Jessica, Britney and Christina handle that.”
Read moreTake ELLE’s quiz to see what your perfume says about you!
Check out celebrity looks you can copy at home!