(If you already like Star Wars, they're good too.) 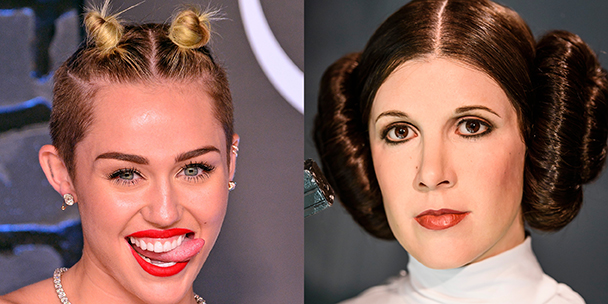 If you aren’t a diehard fan of the Star Wars saga, the only replicable beauty look that probably comes to mind is Princess Leia’s hair – two buns pinned up on either side of her head – but today, that reference reads more Miley Cryus than leader of the Rebel Alliance. Now, you’ve got options.

In anticipation of December’s release of the seventh Star Wars film The Force Awakens, CoverGirl created six looks inspired by the series for their new campaign, all designed by the beauty brand’s global creative design director Pat McGrath. “The Light Side was all about metallic tones – the influence of greens and lilacs,” says McGrath, of how she channeled the supernatural, metaphysical, all-power force into the looks. “The Dark Side was about power and geometry, working with blacks, reds and gold metallics.” The resulting characters – Chrome Captain, Dark Apprentice, Droid, Jedi, Mystic and Storm Trooper – are fodder for the best Halloween costume ever, but can be toned down for a night out.

See all six looks below, plus one bonus look featuring CoverGirl Janelle Monáe, who said she had to get in on the action for three reasons:

1. Her love for Star Wars: “I remember watching it in my grandmother’s living room in Kansas, and I was so taken aback by the costumes, the set design, Princess Leia’s hair!”

2. To celebrate female empowerment: “It’s always amazing to have women in leadership, especially in science-fiction and film: [me] being a woman and owning my own record label, and George Lucas’ wife Mellody Hobson is brilliant, she owns her own company.”

READ MORE:
10 best celeb beauty Instagrams of the week
5 contouring products for people who don’t know how to contour
This is the proper order to apply skincare products in