When men love kids but don't want to become dads

Ease up. Some men are great with kids, but that doesn't mean they're dying to have them. 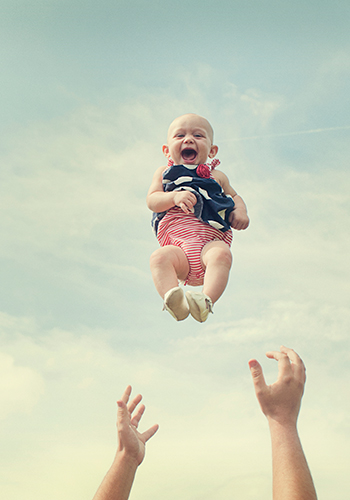 People ask me this all the time, but it’s still a weird question. (“Why?” I want to say. “Do you have some for sale?”) But I suppose it’s better, and a little more hopeful, than the alternatives: “Don’t you want kids?” (Subtext: You monster!) Or: “No kids for you, huh, weirdo? Probably for the best.” Because if you accept procreation as the baseline of human endeavours, then someone in his mid-30s without a litter to cram into a minivan is the cultural equivalent of a lunatic running a marathon in a handstand.

Since I’m not currently in a long-term relationship, and have never been party to a romantic situation in which pregnancy would have inspired anything short of panic, kids aren’t really on my mind. Except when they are, which is always, because other people’s children are everywhere: riding grocery carts around the supermarket, stealing my seat on the subway, shrieking like caged hyenas for the entire 20-hour flight to New Delhi. (And, you know, they can be adorable and fun sometimes as well.) And once you’re in your mid-30s, it’s not just strangers’ kids who seem ubiquitous – it’s your friends’ kids too.

READ MORE: Why one woman decided to become a surrogate

Most of my close pals who are parents have cool, smart, terrific children. Not all of them, mind you, but I’ve ruined friendships by making fun of people’s shoes, let alone their progeny, so I’ll avoid dwelling on the duds. And no matter how strong the bond of friendship, a chasm often opens between moms, dads and their childless acquaintances once kids enter the picture. Not being invited to a sixth-birthday party sucks, for example, but so does attending said birthday party and lurking purposelessly in the corner while everyone else runs around stopping nosebleeds, luring hyper kids down from the roof and quizzing the potluck providers about shellfish and nuts.

I probably sound like a cranky, youth-hating curmudgeon – the sort to grumble about teenagers’ pants (Too tight! Too baggy!) and scowl at families in restaurants over my boiled eggs and beetroot. I do, however, quite like kids. (There are exceptions, though – the little turd who spat at me from a school bus, for example.) I worked at sports camps through my teens and early 20s, taught elementary school for a couple of years and occasionally run writing workshops in high schools. And I think I’m “good with kids,” or at least I’ve been told as much – although it’s often followed forlornly by “And you’d be such a great dad!”

These days I make my living as a writer (at home, alone, in a sequence of shame spirals), so I don’t interact with many other adults that often, let alone young people. The problem, too, is that a grown man hanging out with children without some institutional context isn’t just difficult; it’s suspicious – even creepy. Simply typing the words “I like kids” makes me feel that I should offer qualifiers such as “with proper supervision” and “but never in my basement.”

READ MORE: How one woman proposed to herself

The other day I met two kids, a brother and a sister, on the street when I was walking my dog. They enjoyed him so much that they invited us home so they could play with him off-leash. How much fun would that have been – my pooch and I romping around in that goofy, carefree way you can only get away with in the company of children? And these siblings were especially terrific. “Fascinating how dogs smile all the time,” pontificated the sister, like a pigtailed Socrates, “and yet our cat just frowns and frowns and frowns.” “Our cat,” added her brother with a dismayed look, “doesn’t remember anything.”

I was reminded of some of my more cherished and hilarious moments as a teacher – such as the time I asked a six-year-old if his dad drove him to camp in a spaceship and he flew into a blind rage, screaming “It’s just a Volvo with a roof rack!” Or another occasion, when my Grade 3s, for lack of a common prayer among their diverse religions, hummed a mournful version of “O Canada” at the funeral for our class gerbil. But, nostalgia aside and regardless of how much these kids liked my dog, I couldn’t go back to their house. Imagine coming home from work to a thirtysomething stranger thrashing around the backyard with your eight-year-old daughter. Your first call wouldn’t be to the cops; it would be to the mafia to help dump the body of said stranger because you strangled him to death with the garden hose.

READ MORE: Can a sports fan also be a feminist?

As a man, I find it a bit more of a challenge to enjoy day-to-day interactions with young people. If I want to spend time with kids without siring some of my own (or ending up sleeping with the fishes), the easiest answer seems to be taking a job as a food-court Santa Claus. However, that’s one yuletide tradition I can’t accept: “See that old bearded man hiding under that tree? Go sit on his lap and tell him what to leave behind when he breaks into our house.”

To be fair, though, I obviously enjoy privileges that female friends my age do not. If I want to, I can wait until I’m in my 50s (or even older) to have children. But life can be a lonely thing, and the clichés are true: Kids force you to experience things differently, and the ways in which the world unfolds for them in real time is a marvel to behold. So do I want any? I can much more readily imagine having kids with someone than being suddenly appointed some children to raise.

To ask a man in his mid-30s if he wants kids is begging for a sarcastic response, if only because it suggests inadequacy – whether personal and painfully relevant or more broadly cultural and alienating. Unless, of course, you’re that man’s partner, and you’re hopelessly in love, and the future stretches out before you like some great unfurling tapestry, and you look into his eyes, and you take his hand in yours, and you ask him, with everything in your soul and heart, “Should we?”

READ MORE:
Can your relationship survive a juice cleanse?
How to tell if your date is into you
4 dates, 4 unconvential date ideas