The Unexpected Catharsis of Watching an Ex Find Love

"It's funny how people from your past can bring out the better parts of you." 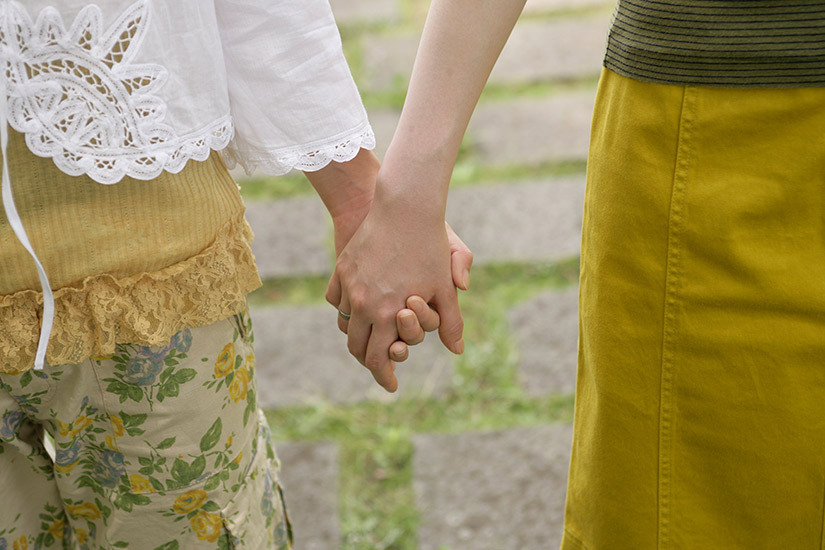 Twelve years after I broke up with my high-school girlfriend, Angela, I found myself in a forest clearing wearing a black dress and bright-red lipstick and officiating at a wedding. I was 29 and 100-percent bleach blond, and six years had passed since I’d decided I was a woman and started taking hormones to transition. I was about to say “Love is always part of what we are doing right.” For teenage me—a green-haired boy who hadn’t quite figured out yet that he wasn’t a boy—all of this would have been weird enough even without the fact that one of the newlyweds-to-be standing in front of me was Angela.

Angela and I had the kind of sweet and dramatic high-school romance you might find in a YA novel. When we began dating, I was 16 and she was 17. We were theatre kids in a university town on the West Coast, kissing in my stepdad’s old beater car, exchanging instant messages, watching old horror movies and Buffy the Vampire Slayer episodes and sneaking out after curfew to go to all-night diners.

Before I met her, I was cynical about love the way only a teen can be and flat-out disillusioned about marriage. My parents had divorced when I was four. I had zero memories of my mom and dad together and lots of memories of them apart and overworked, lonely and exhausted. It seemed like the whole business had just caused them a lot of misery. Marrying young, like them? Or marrying at all? Not for this kid.

But Angela and I confided in each other, trusted each other. She put makeup on me for the very first time while we were sitting in a school hallway. (“Close your eyes,” she said, studying my face intently as she applied eyeliner.) I half-jokingly asked if I could put on her dresses; she said yes, and I would wear them to school. Kids shouted and jeered and asked her, “You’re okay with this?” And she replied, “He looks so pretty.” Later, in the quiet by the river in a park, she told me about her history with depression, and I told her I loved her. I was still sour on the idea of marriage—of, like, hearts-and-flowers romance forever— but Angela taught me that I could probably do love.

When we broke up after a year of dating, we stayed friends. I got drunk at her house, brought her cheesecake on her birthday. She burned me R.E.M. CDs. We made banana pudding in the middle of the night and drove around our neighbourhood, surprising insomniac friends with dessert. A few months later, she came out to me. She was in love with a girl. Two years later, I came out to her: I wanted to be a girl, I said, and then spent the next few years waffling about what to do about that. Through it all, Angela and her then-new partner, the same person she’s still with today, were always kind, so kind, in a way that many people back then weren’t.

I moved east, and we fell out of touch in the years that followed, but the scant times I went home, I always visited Angela. Watching her relationship grow and seeing her pull through her father’s disownment for her queerness, raise an adopted child and finish school—all while living with a supportive, loving partner—was calming for me, a twentysomething transsexual who found commitment so intimidating that she literally ran away from the last stranger she hit it off with. It made me feel that stability was possible, even if it felt a long way off for me.

Three years ago, on my way through town from a conference in California, I dropped in at their place to stay the night. That’s when they told me they were having a commitment ceremony in honour of their 10-year anniversary: Would I officiate it?

Any doubts I might have had were quelled by the simple fact that Angela had been there for me and I needed to be there for her. And I believed in what they had. By this point, I’d seen Angela in this relationship for nearly a decade, and in the frustrating way that ham-it-up clichés prove real, I’d realized that maybe marriage isn’t some eternal state for cynics and romantics to respectively disavow or lust after—maybe marriage is just a special word for a love that’s been around long enough to celebrate.

So that’s how I ended up in a black dress in a forest. The wedding, at Angela’s mom’s house in the country, was relaxed and fun—the ceremony was under 10 minutes and the food and drink were limitless. Later, we danced on the patio behind the house to ’80s music. Old friends from high school showed up, including one I’d lost post-transition and hadn’t seen for years. We hugged it out by the beer keg and the goat pen. It was a beautiful night, and the stars were out. All the guests slept in tents on the lawn, and the next day Angela and I said our non-tearful and very warm goodbyes.The distance between us means we don’t see each other often. But it’s only physical distance—I feel nothing but tenderness for her and her partner.

It’s funny how people from your past can bring out the better parts of you. When I was younger, I thought my mom and dad made a mistake in marrying: They were “wrong” for each other and should have married someone “right.” Someone perfect. But, of course, perfect partners don’t exist. Angela taught me that and also that I was worthy of permanent love—or whatever you want to call marriage. Today, when I fight with an ex or think about a terrible date that ended in rejection, I remind myself of the two of them in the forest, and I remember those words, “Love is always part of what we are doing right,” and I believe in love for myself too.

Casey Plett’s first novel, Little Fish, is out now. She’s also the author of the short-story collection A Safe Girl to Love.

This article was originally published in the June 2018 issue.