One Woman's Quest for a Grown-Up Relationship with Money 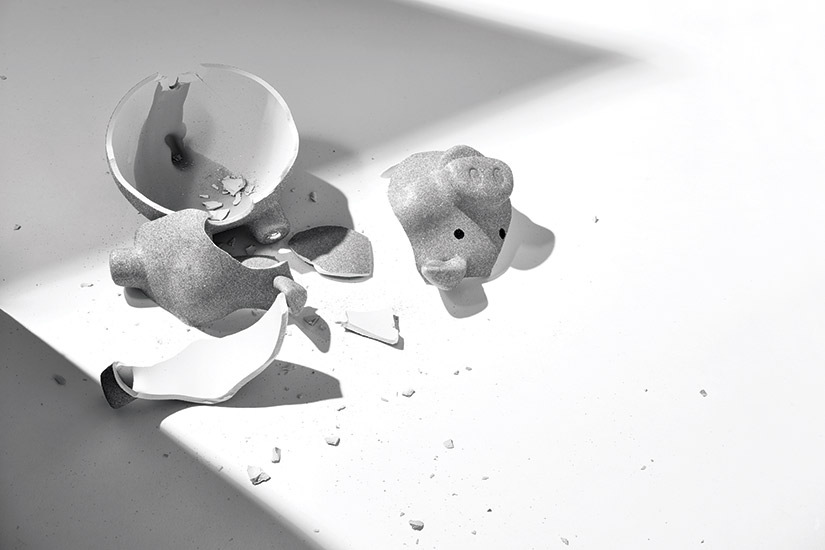 I’ve only ever known two states of financial being: just paid and flat broke. I’ve long lived beyond my means—primarily because I’ve never been entirely sure what my means are. I confess to acting like a drama-chasing teenager when it comes to money—the first flush of having it, anyway. I could do without the inevitable heartbreak of an overdraft. But as I’ve watched my friends make rite-of-passage purchases (homes, cars, Max Mara camel coats), at the age of 40 I’ve had to face the fact that my adolescent relationship with money has had grown-up consequences.

After nearly two decades of hustling, I’ve got nothing to show for my work. No RRSPs, no significant savings, no house, no condo, no assets that will accrue in value. Nothing but $4,000 of credit-card debt and a statement bag I bought years ago in NYC. (Statement: Visa; status: still paying it off.) In tough times, I imagine Til Debt Do Us Part’s Gail Vaz-Oxlade shaking a Mason jar of coins at me and shouting “You did this all yourself!”

Of course, she’d be right. But finger wagging is never going to work for me in the long term because shame doesn’t motivate me; it paralyzes me. It also sends me back into the arms of my old friend denial, which only perpetuates the cycle of regret, anxiety and wilful blindness. In desperate times, I’ve tried boot-camp-style approaches to budgeting and found them as successful as extreme diets—which is to say, not at all. (I did the Master Cleanse once. Gained 10 pounds.) And I’m not alone. Toronto-based certified financial planner Shannon Lee Simmons hears the budgeting-diet comparison all the time. Traditional budgeting often takes an aggressive approach to cutting the fat from spending, one that makes adherence tricky: We immediately want what we cannot have. “It’s like being on a lettuce diet and then you see a pizza and binge,” she says. I don’t want to have a punitive relationship with money followed by an excessive, irresponsible one. I want a positive, balanced relationship with my income, one that satisfies me without filling me with guilt or shame.

To move from restriction or excess to balance, you first have to cut yourself some slack, says Simmons. In her new book, Living Debt-Free: The No-Shame, No-Blame Guide to Getting Rid of Your Debt, she encourages people to begin their financial planning by “reframing” their debt story without shaming or negative self-talk. (You know, all those “I’m such an idiot with money” thoughts that keep you in a state of embarrassed paralysis and perpetual broke-ness.) “Your self-talk becomes reality, so the more you think you’re bad with money, the more you will be,” says Simmons. “You basically assume ‘I’m a person who has debt or is in debt.’” So why even bother trying to make your way out of it?

Emphasizing the negative isn’t always accurate either. As Simmons points out, it’s not just our vices that get us in trouble; our virtues do too. Research suggests that people who struggle with money are often more generous in sharing what they do have with others. When I look at my bank statements, I can clearly map my weaknesses. I eat out when I’m too tired to cook, buy clothes when I want to impress, buy more when I’ve been dumped (ditto getting my hair done). More often than not, I’ve just wanted to escape the restriction of my limited income by proving my value with a random pricey purchase. (Hello, goop.com.) But I can trace some of my virtues in those transactions too.

I like to spoil loved ones, I love to buy dinner or brunch for friends and I’ve helped my family out in times of need (as they’ve helped me).

These things bring me joy, but understanding what really makes us happy versus what only provides momentary elation is a key component in cutting back on spending. “Money is just a tool, and people use this tool to be happy,” says Melissa Leong, author of Happy Go Money: Spend Smart, Save Right & Enjoy Life. “You can teach people about money and budgets, but if you don’t understand why they’re spending the way they’re spending, then you’re not going to help them.”

For me, part of this challenge has been thinking about the reasons why I’ve chosen the “Interac and run” approach to my bank account. Something Leong says during our conversation about the connection between impulse spending and our state of mind sticks with me: “When you are in a state of stress, the part of your brain that regulates long-term repercussions of your actions is turned off.” Instead of pushing forward, she says, take a minute for some self-awareness rather than self-indulgence. “Ask ‘Is this a good use of my money? Is this purchase in line with my values?’”

I decided to use that tactic as the first step in aligning my spending with both my personal values (generosity and spontaneity) and my goals (financial stability and maturity). With that in mind, I’ve since crunched the numbers, separating my fixed expenses from the money I can devote to debt, savings and spending. I’ve also come round to the idea that budgeting doesn’t have to be about living in what Simmons calls “scarcity” mode.

It’s not a spending free-for-all, but it can be flexible, allowing space for both planning and spontaneity. Instead of micromanaging my discretionary spending into impossible-to-control categories, like “coffee,” “magazines” and “beauty products,” I’ve taken both Leong’s and Simmons’ advice and opened a “spending account.” This is where any discretionary income goes (a lot less than I imagined, as it turns out). It’s an amount I’ll use to sensibly indulge my affection for fancy shampoo and brunch with friends—the major difference is that the amount is fixed rather than improvised.

Today I have firm knowledge of my financial virtues and vices, greater self-awareness and a banking plan with a little room to play. I almost feel like a grown-up. Anybody want to buy a slightly used statement bag?