ELLE Canada collects dating advice that suggests men need to 'man up' and risk social rejection in order to find the relationships they really want. 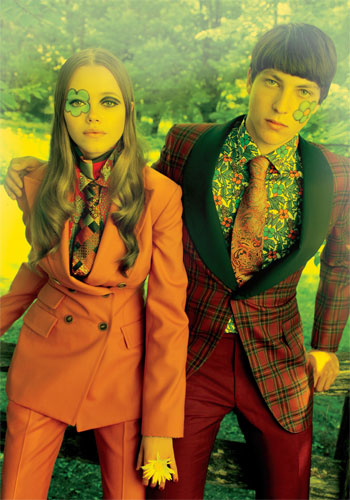 It’s no secret that I have square tires when it comes to "wheeling women." My friend Dan, however, is quite the opposite. He exudes confidence, charming ladies like a prince in a Disney movie. (Coincidentally, I’m compared to
Toy Story‘s Woody, which, I assume, is because of his jealousy toward Buzz.)

Our differences become particularly evident during hungover breakfasts at our questionable local diner. There, we assemble pieces of the previous night’s festivities, discussing debauchery over cheap, lukewarm eggs, ibuprofen and your choice of bacon or sausage.

After my second glass of apple juice, I usually voice my tiresome aside on loneliness-which friends blame on my hasty departures from the club.

In fact, I’ve acquired the nickname "Houdini" due to routine disappearances before 1 a.m., when I cab home alone, claiming to be tired of the same club-or tired in general.

There’s nothing magical about why I leave early, though: I don’t have the confidence to approach a woman I’ve never spoken to.

My cocktail of insecurities started in the early years of high school. I was bullied and perpetually turned down, and my advances went nowhere. By college, I was suffering from a brew of self-doubt, second-guessing and a less-than-desirable self-image. My anxieties lingered like a scarlet letter of unassertiveness.

Cut to New Year’s Eve 2012, when Dan effortlessly garnered phone numbers from two very attractive women (one of whom I’m almost positive was over 30-a gold medal for the twentysomething guy).

I, on the other hand, spent the night hiding our other friend’s drunken rambling and public urination from security and police. (He woke up with no recollection of these events but was later reminded by a vicious afternoon hangover and tagged photos.)

The next morning, Dan mused about his sexual successes and relationships and I about what I ate when I got home (in this case, leftover lasagna from my Italian grandmother with a side of everything else in the fridge). That’s when a revelation hit me like a vision from Disney’s That’s So Raven. I could learn from Dan-I just had to be the Steve Carell to his Ryan Gosling, so to speak.

Hoping to first get a cheat sheet about what women are actually like, I turned to Lauren White, a.k.a. Raymi the Minx, a popular Canadian blogger who bares it all-breasts included-on her daily blog.

Honestly, I was hoping to avoid venturing too far outside my comfort zone, so I asked the unofficial sexpert and burlesque performer if there was any way I could get a woman’s attention at a bar without having to, you know, approach her.

"Be devastatingly handsome and practise your best Clive Owen smouldering techniques," she answered.

"Send brooding looks as you stare puzzlingly into your glass and ignore everyone. Wait for the prey to come to you." Then what? "Wear an awesome outfit and be GQ, not Trailer Park Boys."

Well, as a natural brooder, I figured I could give that a shot. But then Raymi went on: "There are more women on the planet and not enough men to go around, so tell all your loser single friends to man up already because we’re waiting."

That struck me. Unlike my co-workers, cousins and beloved mother, Raymi didn’t feel sorry for me. She thought I should get off my ass.

So I scheduled a man-to-man apprenticeship with Dan-which was basically a Hangover-style guys weekend in Niagara during which he and two of my buddies gave me a head-to-toe once-over and a reality check.

For an evening out, the boys put on their club gear of dress shirts and black flat-fronts. I, on the other hand, donned a red sweater, collared shirt and jeans. I looked like Mr. Rogers after half a bottle of whisky. Turns out I dress like a substitute teacher and buy clothes one size too large (their words, not mine). So Dan lent me one of his coolguy button-down shirts (which was too tight-although they disagreed), and we headed to the club.

As I stood brooding at the bar (per Raymi’s advice), a woman approached me. "This is it!" I thought. She licked her lips, drew closer and asked "Can I steal your spot or are you waiting for a drink?"

Strike one. I relinquished my spot and headed to the dance floor, where Dan, giving me a cocky nod, was approaching a drunk redhead. He lured her in with a wink and twirled her, making her the envy of her friends. Before I knew it, he was typing her seven digits into his phone as she giggled and flipped her fiery hair. Bastard.

How did Bobby eventually get a girl’s number? Discover his secret on the next page…

It was my turn. Since I can’t wink without looking like I’m getting a fork in the eye, I chose a different reeling-in method: flattery. I approached one of the redhead’s friends and told her she looked beautiful. But the music muffled my already bass-level tone.

"What?" she yelled as the strobe lights flickered. "Y-you look beautiful!" I shouted back too loudly. She rolled her eyes as if I had told her Ryan Gosling was gay and turned back to her friends.

After trying a line on the bartender and flaming out, I felt like I’d put in a full shift. But I’d pinpointed my biggest challenge: I had to learn to shrug off dismissal like Dan does.

He doesn’t allow for the possibility of failure, whereas I made a habit of taking off in a cab at the mere mention of it, stopping at McDonald’s for a Big Mac and moping while scraping up any remaining lettuce scraps. (That weekend, I’d merely walked back to our hotel after a trip to Burger King for a Whopper with cheese and onion rings. Progress?)

As I sat alone, bathing my last few onion rings in zesty sauce, I thought back to a question Raymi had posed: "What males in cinema are you drawn to or do you emulate? Be them, but be yourself."

So I looked to Judd Apatow characters for insight. Take Steve Carell’s Andy in The 40-Year-Old Virgin-I’m no virgin, but I could relate when he shouted "I respect women! I respect them so much I completely stay away from them." I realized that I was worried I would be pegged as a "player" if I started approaching women confidently. And then I realized how crazy that is. No more fast-food void fillers for me.

A few weeks later, I went to a party at my friend’s condo; it was a preamble to an event at a distillery close by. I was "brooding" over my drink when a gorgeous blonde approached me and introduced herself. Let’s call her Erica. She had the body of the superheroines I’d drawn when I was a kid. Conversation flowed seamlessly, and before I knew it we were off to the distillery.

The event was packed. After several hours and dozens of drinks, the crew decided to head back and order pizza. If I wanted a chance with her, I knew I had to act. Instead of slinking away, I screwed up my courage (okay, a full keg of liquid courage) and asked for her number. We exchanged info and then she left, opting out of greasy pizza. I took a deep breath and resisted the urge to plunge into a spiral of hysteria.

The next morning, I woke up partially clothed on a semi-deflated air mattress in my friend’s apartment. The place was empty and way too bright. I needed caffeine. I was heading to the nearest coffee shop when my phone vibrated in my pocket. I assumed that the battery was running low. I dug into my pocket, shuffling around some change. Under the blinking red bar was a short message from Erica that read "hey :)."