ELLE First: The one that got away

He had a skateboard and red-kool-aid-dyed hair. She had Heidi braids and her nose in a book. Lauren Kirshner on her first crush. 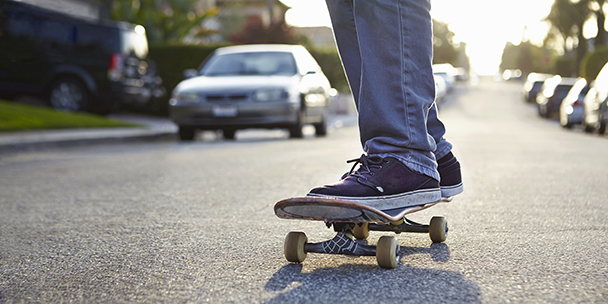 I was not a 13-year-old girl who fell in love easily. In fact, I didn’t even know what falling felt like. The only time I was alone with boys was in line for the Slurpee machine, but that had never led to anything, and my major crushes so far had included Rock Hudson (a dead man not interested in women) and Leonardo DiCaprio (a live man not interested in me). I wasn’t prepared for everything to change in the middle of Grade 8, when a boy I called A.B. – after his initials – moved to the locker across from mine.

I thought A.B. was the most beautiful and sad-looking boy I had ever seen. He had puffy rock-star lips, red-Kool-Aid-dyed hair and a big, sculpted nose that reminded me of a Siamese cat. He rode a skateboard wild with decal flames and wore baggy khakis, the signature style of the coolest skater boys at my school who smoked and classified girls’ breasts in fruit categories. But he was usually alone, and this made me imagine that he was bookish and sensitive and that we could be outsiders together, like Sid and Nancy – only with novels instead of heroin.

But I couldn’t tell him that. Though I had recently started using Sun-In and a grape-coloured lipliner, I was still wearing Heidi braids and collecting inspirational yarn-tasselled bookmarks. When I walked around school, all I saw was the coffee-cream grey linoleum floor because I was too shy to look into people’s eyes. I couldn’t imagine any way of actually speaking to A.B. unless circumstances brought us together.

In the meantime, I busied myself by watching and thinking about him. Whenever he rolled by on his skateboard, electric sprinkles raced across my skin and my chest filled up with a crazy pressure, like tiny rubber balls pinging around. My whole world tilted: My skin became skin he could look at, my eyes, eyes he could peer into, my hair, hair he could touch. I knew I was turning cheesier than the Sweet Valley High books I once devoured and now denounced, but the more I watched A.B., the more aware I became of myself and the more I imagined he became a part of me. I carried his image in the pit of my stomach like a warm hard-boiled egg.

Weeks became months, but my lack of contact with A.B. didn’t faze me. I found other ways to feel close to him. I drew our names on the fogged mirror after showering. I asked my friends to describe our babies. (I was more interested in kittens, but that would have been complicated.) And after I saw him load a Beastie Boys tape into his Walkman, I bought the tape myself and listened to it until it garbled and Mike D went slower than a Sinatra love song.

My opportunity to meet A.B. finally came with the Grade 8 graduation dance. Lacking funds for a snazzier costume, I wore a hand-me-down secretary dress atop a criminally padded bra and carried a snakeskin purse containing my mother’s 12-year-old mood lipstick and several lucky rocks.

The venue was a rented room at the local racquet club done up as textured teen dream, with pearlescent balloons, huge tulle bows and countless bowls of ketchup chips. Girls in crushed-velvet baby-doll dresses milled while boys in oversize suits peacocked in disinterested packs. My eyes followed A.B. around the un-familiar room, although I felt my-self observing the scene rather than living it.

The DJ that night understood the timidity of our junior-high hearts: At a quarter past nine, he breathily announced that this next song would be the last before the last, thereby giving us four minutes to summon the courage for whatever coups we had planned. I knew mine was to ask A.B. to dance, but as I pogoed around the dance floor with my friends screaming “Jump! Jump! Jump around!” my thoughts took a melancholy turn. What if he said no? What if he said “Sure, I’d like to dance” and then, when I got closer, “No, I said ‘You look fat in those pants.’” A hot starfish of indecision uncurled in my chest. And then – a revelation. It hit me like a shot of fresh Dr. Pepper: A.B. and I were going to different high schools, and if I didn’t say something now, I would never see him again.

With the dry-ice machine releasing heavy-metal-style mist, I used all of the guts I never knew I had to cross the room and very softly ask A.B. if he wanted to dance.

He smelled like Irish Spring soap, and he held my waist as I rested my head on his shoulder. “Dreams” by The Cranberries is an awkward song to dance to because it’s somewhere between fast and slow, but I didn’t mind, because dancing with A.B. was magic. It was like dropping a heavy knapsack after days of lugging it uphill. When the song ended, I said “Thank you,” like I was getting change at 7-Eleven. And A.B. smiled and said “You’re welcome” and then was gone.

In bed that night I was still dancing, my fingers numb and warm, my chest filled with a zippy energy that kept me awake. I smelled my arm to see if it smelled like him, and I decided not to shower for a day in case it did.

My friends thought I was on the verge of becoming A.B.’s girlfriend and arranged for a large group of grade eights to see a movie two days after the dance, giving him another chance to see me. The theatre was one of those old-style palaces that don’t exist anymore, with a Gone With the Wind staircase and rich carpeting, and as I searched the crowds rushing the doors and did not see A.B., I felt my old shyness return and I turned to the pattern on the carpet, the little acorns in the paisley whorls – “He’s here!” my friends whispered and disappeared.

I had imagined this moment for so long that when A.B. and I found ourselves off to the side of the snack bar, beside the pay phones and the flavoured popcorn topping stand, I was surprisingly calm. It was the first time that I had stood face to face with A.B. in daylight, and seeing that he had a minor galaxy of zits on his forehead and that his puffy mouth was set in a nervous frown made me adore him even more and convinced me that it was finally time to let out the truth.

“A.B.,” I began – and then, remembering his real name, I started again. “I just wanted to tell you…I want you to know that I really like you.”

A.B. spoke, looking at the carpet: “I really…

Time froze as I watched a man sprinkle his popcorn with three different flavoured toppings.

In a hopeful but unfortunate move, my friends, who were already inside the packed theatre, had reserved two seats one row behind them for A.B. and me to be alone. I spent the next two hours subjected to The Rock, but Nicolas Cage’s peril was nothing compared to mine. I couldn’t stop replaying A.B.’s last lines in my head, circling this now-critical syntactical issue: Had A.B. said “I really don’t like you?” Or had he said “I don’t real-ly like you?” I looked over at him, thinking I could maybe clarify, but he was laughing at a joke I had missed, and I automatically forced a laugh too, which made tears slip from my eyes.

I had a longer cry that night, locked in the bathroom with the shower running so that no one would hear me, the A.B. initials re-condensing on the mirror, my diary on my lap. My tears marked the open pages with soppy stains, and I circled the stains with my pen and dated them: June 30, 1996. I wanted to cry for the whole night – at least seven hours seemed appropriate, maybe eight or nine. I was humiliated, but I also found pleasure in dwelling on my sadness. Every tear was proof of the hope I had held for A.B., and I so badly wanted someone – something – to recognize my feelings. But after 15 minutes, my ribs aching and my throat sore, my tears suddenly dried up. I tried to force out a few more, but nothing came. I was all A.B.’d out. Not knowing what else to do, I went to my room, put the Beastie Boys tape in a bag, took the bag down to the basement and shoved it under-neath an old mattress.

In the following days, I would forget about A.B. for minutes at a time and then remember him with a shocking pang. It took weeks to downgrade him to cameo appearances in my head and another six months for his picture in my mind to fade, like a photo left out in the sun. But, to this day, whenever I see Nicolas Cage in a movie, I get momentarily distressed. And whenever I see those little neon-green boxes of Irish Spring soap at the drugstore, or breathe in a spicy whiff of it at the gym, my heart does a little sigh. And each time I hear The Cranberries, my stomach drops a bit and I can see A.B. at his locker, about to zoom off on his skateboard. His puffy red lips are smiling and his eyes are almost, but not quite, looking into mine.

Each month, we ask a Canadian writer to share a story about a significant “first” in his or her life. Lauren Kirshner is the author of the novel Where We Have to Go, which was a finalist for the City of Toronto Book Award.

READ-MORE:
A crisis of confidence
How to fall in love with anyone (in 36 questions)
Status update: The rise of on-and-off couples
Signed, sealed, delivered