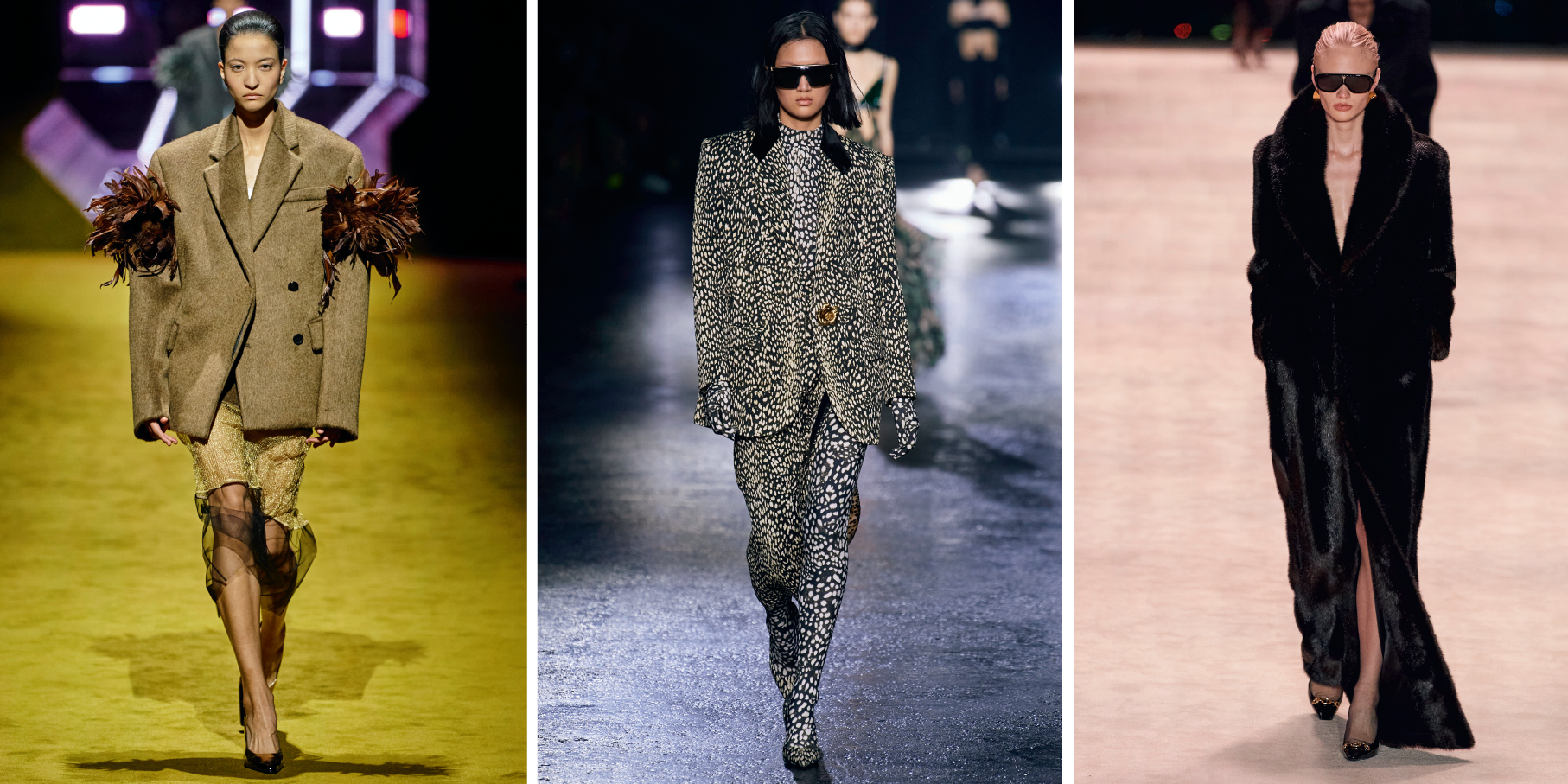 If the recent unpredictable nature of our times has had any impact on fashion trends, it’s that chaos reigns and nothing is as it seems. And as we increasingly return to parties, nightlife and the fun of getting dressed up, it’s never been more apparent that our collective notion of glamour has reached new bounds. Where it was once depicted by a perfectly-made-up and impossibly beautiful head-to-toe look, that flawlessness has been replaced by an anything-goes attitude—one that embraces the conceptual and the playful and oozes personality.

When it comes to dressing up these days, there’s no longer such a thing as playing it safe. On the red carpets, fashion has become personal as stars break the rules and bare it all. At the Met Gala in May, Kylie Jenner accessorized her Off-White gown with a backwards baseball hat, Lizzo brought along her signature flute and Cara Delevingne revealed a gold-painted torso and matching pasties under her red Dior haute-couture suit jacket. At the Academy Awards, Kristen Stewart wore a pair of black Chanel shorts (and even swapped her heels for flats later in the evening) while Rihanna literally busted out of matronly maternity dress codes in several belly-baring ensembles that broke the internet and inspired soon-to-be mamas everywhere. And then there’s Uncut Gems star Julia Fox, whose high-energy fashion experimentation has resulted in a number of DIY creations going viral, including bleached eyebrows, a cut-off white undershirt, a duct-tape brassiere and her signature “Fox Eye” makeup. In menswear, bold colour and provocative silhouettes reigned. Timothée Chalamet wore a customized backless Haider Ackermann ensemble in bright red to the Venice Film Festival, and Harry Styles, who has a close relationship with Gucci creative director Alessandro Michele, was outfitted in a range of bold Gucci looks, including the green suit and handbag he wore at TIFF in September.

That free-to-be-me spirit was equally prevalent on the fall/winter 2022/2023 runways, where personal celebration through extravagance triumphed. Frills and embellishments added an element of drama to otherwise functional pieces: At Prada, a navy puffer was adorned with feathers and worn over a sheer knee-length skirt, and at Saint Laurent, loose leather jackets added edgy informality to floor-grazing skirts. At Fendi, furry clutches contrasted with boudoir-inspired clothing, and at Dries Van Noten, a sparkling belted duster coat brought the Kirakira filter to life. A glamour mainstay, animal prints made a ferocious runway return and were spotted at Roberto Cavalli, Giambattista Valli and Proenza Schouler. But perhaps nothing captured the look at-me-now zeitgeist better than the all-pink-everything ethos at Valentino, where Pierpaolo Piccioli paraded dozens of looks in head-to-toe fuchsia.

With the return of nightlife and parties comes a renewed desire to make a sartorial splash, perhaps for the first time in years. Party-circuit veteran Marlowe Granados, who is also the author of Happy Hour—her 2020 debut novel, which follows a young woman’s exploration of New York City nightlife—has spent her fair share of time on the New York, London and Paris social scenes. She says that throughout 2022, she witnessed a rise in overt displays of nightlife extravagance. “I’ve been seeing a lot of seafood spreads and oyster bars, which I didn’t see very much of pre-pandemic,” she says. “It’s all very swish and decadent.” 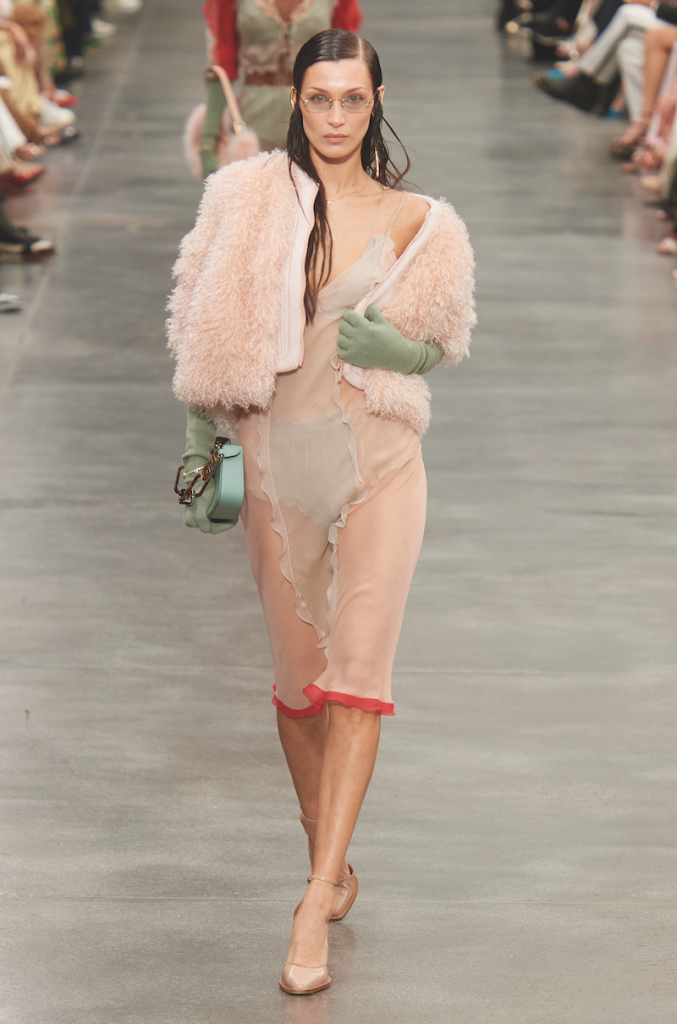 That idea of going over the top has spilled into after-dark fashion choices as sex appeal, grandeur and a sense of practicality collide. Bella Hadid’s ensemble—a visible thong beneath a lace dress and oversized leather jacket—for her 26th birthday party in October was a perfect example. “I think everything’s getting sexier!” says Granados. For her own nightlife escapades, she’s turning to accessories and, in particular, cosmetics to elevate her look. “I’ve gotten much more into makeup as well, so doing something fun with eyeshadow or a shade of lipstick I wouldn’t usually wear can make a night out that much more special,” she says. Complementing this season’s glam runway collections were statement-making beauty looks, including metallic eyeshadow at Gucci, face gems at Simone Rocha and Burberry and the smudged, after-hours smoky eye at Eckhaus Latta.

For Toronto-based designer (and recent Canadian Arts & Fashion Awards emerging-talent winner) Kathryn Bowen, designing clothing that bolsters confidence is a source of enjoyment. “I would really love it if every person who wears a Kathryn Bowen garment just feels cool in it,” she says. “I also hope all wearers of my clothes understand the importance of self-expression and the importance of allowing themselves to have an evolving personal style. All of these things create confidence.”

Bowen, whose brand is a favourite of glamour queen Kim Kardashian (she wore custom mesh dresses by Bowen in her KKW fragrance campaign), says that the pandemic has broadened the traditional notion of glamour to include strong moments of personal expression. “I’ve seen a lot more confidence and comfort in people choosing to embrace natural beauty in a really unapologetic way. But, equally, I’ve noticed people making impulsive changes to their appearance, like neon hair, bleached brows and crazy TikTok-trending eye makeup,” she says, explaining that both approaches offer exciting new ways to achieve a feeling of glamour. “Our perspective is changing and allowing unconventional looks to be defined as glamorous, and fewer of us are conforming to one look that is deemed the most attractive.”

This anti-perfectionist ethos has given way to playful experimentation, allowing for a new-found sense of personal expression following years of style homogeneity dictated by social-media trends. In short, it’s the perfect time to delight in playing dress-up. “It’s really exciting to feel glamorous because it’s a much more elevated version of your day-to-day self,” says Bowen. “Glamour is absolutely more of a feeling than a defined look, in my opinion.”

Read more:
The Power Suit in 10 Statement Pieces
The Babydoll Look Is Having Its Fashion Moment
Iris van Herpen Is The Fashion Industry’s ‘It’ Designer