These Russian fashion designers are getting our attention

How Gosha Rubchinskiy, Andrey Artyomov and Dasha Selyanova are making a fashion statement worthy of the term. 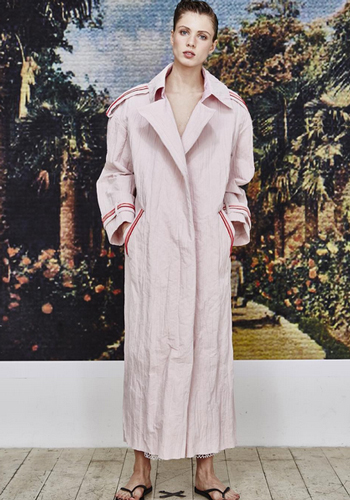 Unless you’re talking about the subway, it may seem near nonsensical to talk about an underground movement these days. The bona-fide subcultures of yore sprang out of rebellion (the French Resistance), illicitness (raves) and marginality (punk). But what secrets remain in the age of Internet glare and the legalization of forbidden pleasures that we once held dear?

An underground cachet, however, is exactly what a handful of Russian designers–Andrey Artyomov, Gosha Rubchinskiy and Dasha Selyanova–have achieved with their post-Soviet aesthetic. Their designs aren’t transgressive because of silhouette or form; it’s their use of humour and irony that sets them apart.

Artyomov, of the fun luxe clothing line Walk of Shame, started out in Moscow as a stylist for L’Officiel Russia. Beyond his whimsical embellishments and silk slips, it’s his Intourist T-shirts that hint at the message behind his alt-mainstream vibe. “When the country was closed in Soviet times, we had Intourist hotels,” explains Artyomov. “These were the only places in Moscow where people could buy U.S. dollars and where Russian girls could meet international visitors.” Artyomov hints that some of these girls have since transitioned into wealthy oligarch wives. “Andrey used the Intourist logo as an ironic observation about Russia,” chimes in his public-relations rep, Anna Dyulgerova. “He’s talking about who today’s Russian elite were during Soviet times and who they are now.”

The people Rubchinskiy refer­ences in his pieces are the “gopniks”—those Adidas-wearing, shaved-head hoodlums who popped up when the Soviet Union collapsed in the ’90s. The key looks in this Moscow-based designer’s collection are track pants worn tucked into sweat socks and tank tops tucked into gym shorts. Gopnik track suits are a 10-year-old inside joke among post-Soviet designers.

“I can recognize the gopnik look better than someone from Europe,” says London-based ZDDZ designer Dasha Selyanova. “It’s a young-criminal vibe–someone who doesn’t have a job but maybe does drugs, lives with Mom and skates. Gosha has made our past trendy.”

Selyanova’s focus is more modern day. Her designs are a sartorial poke in the eye to the increasingly repressive political environment back home. “Art feeds off suppression,” says Selyanova, whose spring line features prison uniforms printed with the word “Insecurity.” “In Russia, we’re scared of the police. It’s a very insecure and unsafe place to be. If you need to get a certain document, you might not get it. If you are doing well, they might tell you to shut down your business. You live in this environment in which anything can happen. And that makes creative people rebel against it.”

Underground fashion, if it’s any good, doesn’t stay underground long. But though we may wear Intourist T-shirts and they may become a huge trend, there is a catch: Most of us have no clue what the insider reference is. In other words, a trend holds on to some of its undergroundness by withholding meaning. And this is why Russian designers have loads of subterranean cred–because of their past and the mounting repression of the present.

This story first appeared in the March 2016 issue of ELLE Canada.

READ MORE:
What to wear on a first date
50 dreamy wedding dresses from the couture runways
Is the flightsuit here to dethrone the jumpsuit?